The following is a reprint from Unwinnable Weekly Issue Seventy/Seventy One, the Metal Gear Double Issue. If you enjoy what you read, please consider purchasing the issue or subscribing.

In the world of Metal Gear, time does not necessarily move in a straight line.

Instead, the specific settings of the games in the franchise – notably the use of time in Metal Gear Solid V – force a distance of time, meaning the player is separated from the time the game ostensibly takes place. This distance forces the player to have an awareness of time passing, and because of this very self-reflection, face some harsh truths: to borrow from Orwell, that we were not always at war with Eurasia.

Metal Gear Solid V has some fantastical elements, like the in-game idea of a parasite that can infest humans and make them able to breathe through their skin. However, much of it is grounded in reality, with items and references such as cassette tapes filled with songs from the 1980s. The game is supposed to be set in 1984, and accordingly, during the missions set in Afghanistan (roughly half of the game) you are largely fighting Soviet enemies. In placing the game in 1984 and basing missions out of that particular location, Metal Gear Solid V also subtly asks the player about current politics 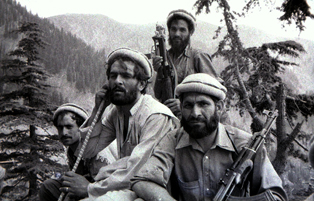 Namely, in fighting against the Soviet forces, players often ally with Mujahideen: extremist Islamic fighters that were battling to topple the Marxist-Leninst style Afghanistan government. The Carter and Reagan administrations supplied the Mujahideen with weapons and considered them freedom fighters against a communist regime. As such, this support was active during the time in which Metal Gear Solid V is supposedly set and even lasted past the Soviet withdrawal in 1989.

Yes, this is fiction, but this is also story-based. As the Diamond Dogs are a private security force (read: mercenaries), they are hired to work with various organizations. While sometimes these organizations are charitable – buying your services to remove mines from an area, for example – other times, they are extremists buying your services for their own gain. Remember, the player is playing this game in the year 2015, fourteen years after the tragedy of September 11, in a world awash in the ramifications of Islamic extremist influence in the Middle East. This disconnect in time seems to make players face the political reality of shifting alliances over time. It serves to confront the idea of foreign military involvement in other nations – and what the ramifications of such involvement may be. Players may confront the idea that loyalty is in the eye of the beholder.

In-game, this is also reinforced on a much smaller scale by use of the Fulton recovery system (and associated wormhole – again, the fantastical does

exist here). You can put enemies to sleep and “recover” them, sending them to Mother Base and, over time, those who were once your enemies become your willing allies. There is no absolute “us” versus “them” in Metal Gear; alliances and loyalties shift within the franchise. Even the allegiances and ideals of the player character are up for debate.

This aspect of distance in time goes even further: it looks forward inside the franchise itself. The first Metal Gear Solid was released in 1998, but in-franchise was supposed to take place in 2005; so one of the bits that players of the franchise tend to enjoy in Metal Gear Solid V is seeing characters like Revolver Ocelot, already familiar with where the character will go in his story. The same goes for Master Miller, a character who shows up throughout the franchise, and, of course, Big Boss.

In forcing distance of time, and playing around with the setting (in time) of the Metal Gear game entries, Kojima and his crew subtly built a story of politics and shifting loyalties that the player is forced to confront through play.

Katriel Paige is Editor-in-Chief of Haywire Magazine and co-chair of studyofanime.com. Her pieces have been published in Paste Magazine, Offworld and other places. If you like her work, consider contributing to her Patreon.