We’re watching Phantasm. Ed’s never seen it, but the rest of us have. We love it, but we can’t shut up with the comments. We make fun of the late 70s fashion. We laugh at the fake sets and the amateur acting. Our minds boggle at the bizarre plot.

Yet when the sentinel sphere embeds itself in the face of the cemetery caretaker and drills into his skull, we all get quiet. Blood streams out of the back of the sphere and the caretaker collapses to the ground. As he dies, his muscles relax and a pool of urine collects at his feet. We nod in appreciation of this one moment of stark realism. 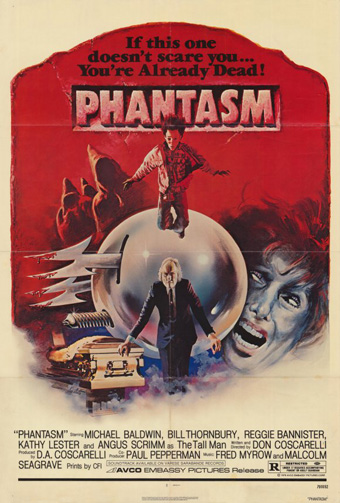 The first time I played Dead Space, I lasted no more than two hours. The atmosphere of the game was oppressive to begin with, but the encounters with the necromorphs – undead creatures born of human corpses horrifically altered by an obscene evolution – came all too frequently. Dead Space was terrifying, but also exhausting. It wasn’t long before I expected a life or death encounter at every corner, in every elevator, during every quiet moment. Playing that game was a kind of psychological punishment consisting of equal parts of Alien and The Thing.

Exhausted, I put the game aside for three years and only finishing it in the run-up to the sequel. Dead Space 2 found the perfect balance. Where the first game was an unrelenting gauntlet of survival in a derelict ship that emphasized isolation and desperation, the lunar colony of the second game offered a more varied experience. Frantic remoteness gives way to the madness of crowds and widespread panic as the space station’s population attempts to flee from certain death. It is a different kind of horror, suffused with our modern terror of epidemics and dirty bombs.

And then there is this year’s Dead Space 3, a game more in touch with John McClane than R. J. MacReady.

Once upon a time, Phantasm left me unnerved and raw. There is something about the movie’s dream-like quality and pervasive strangeness that wore me down as a first-time viewer. Angus Scrimm’s Tall Man is a menacing presence and his cold marble mausoleum is an unusually bright, and therefore all the more off-putting, locale for horror.

There is plenty to admire in Phantasm and its sequels, but I can no longer say that dread is one of director Don Coscarelli’s weapons. Like so many other horror movies I love – The Exorcist, The Fog, Hellraiser, Poltergeist – time has drained it of its fearful power.

My friend Ed, who had never seen the movie before, didn’t seem particularly agitated. Phantasm came out in 1979. Our collective vocabulary of terror has grown exponentially over the last 34 years.

Dead Space 3 doesn’t scare me at all. I sit in my living room, in the dark, in the early hours of the morning, and I try to feel something akin to fear, but to no avail.

Yet, I still love the game, even as it fails completely to frighten me. I would be lying if I said the lack of scares was not disappointing, but there is still something utterly compelling about the world of Dead Space. 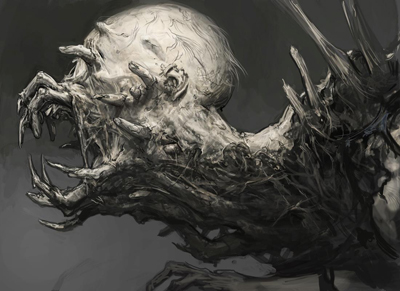 I keep finding myself flipping through the The Art of Dead Space, a beautiful collection of concept drawings. There is something particularly interesting about a group of artists working within the confines of such strong visual themes; their limitations set them free. If you want proof, look at the dozens of pages devoted to the exploded corpse concepts of the necromorphs, or how the metal ribbing of Isaac’s space suit has influenced the design of everything in the game world, from space ships to glaciers.

However, no matter how visually intriguing the world may be, it is impossible to rekindle that feeling of anxiety that was so overwhelming back in 2008. Phantasm is bogged down by double breasted suits and improbable jump scares and three ensuing decades of horror movies that have embedded themselves in our collective unconscious.

Dead Space suffers similarly. I know monsters are going to burst from that duct work as soon as I flip this lever. I know that, no matter how close my back is to the wall, a necromorph is going to appear behind me. Maybe two or three. I know it, so it isn’t harrowing – it’s merely frustrating. A momentary inconvenience solved with bullets, just like every other shooter.

What was once spine-tingling in Phantasm and Dead Space has become part of our DNA, a kind of pop culture fight or flight reflex. Some kinds of fear have a shelf life. Over the course of my 34 years, I’ve been afraid of vampires, the alien standing behind my bedroom door, driving on the highway, the ocean and more. I have read stories, watched movies and played games that have exploited those fears, but over time, I’ve gotten over them thanks to fear’s greatest enemy: familiarity.

Get familiar with Stu Horvath on Twitter @StuHorvath. He won’t bite.

I Love You, Hundreds – But It’s Over