My parents began shopping for our family’s second computer in the middle of 1997. I remember accompanying them into our local Circuit City and looking at all the brands they had to offer: Compaq, Dell, Hewlett-Packard, along with many other brands that no longer exist. I never quite understood why my parents wanted a PC; they are (or were) old-fashioned types, immigrants from Mexico, living in a community surrounded by like-minded people. Perhaps my eldest brother, who worked daily with computers, had shown them what the devices had to offer. Whatever the reason was, I was ecstatic. I’d finally have my chance to play these awesome computer games, which had been beckoning me with their remarkable visuals and their entrancing box art. 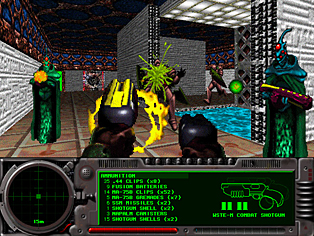 I had my first computer gaming experiences in 1994 on one of those old Apple Macintoshes, which I think my brother had gotten from work. While the word processing and printing were useful for schoolwork, I was much more interested in the system’s potential for gaming. Unfortunately, the Macintosh only came with two games: Dark Castle, an exercise in precision and tediousness that quickly frustrated my 8-year-old mind, and Stunt Copter, a simple game that lost its charm after I spent a few minutes of hovering the helicopter directly over the wagon. Computer gaming and I weren’t exactly off to the best start; the games were slow and nowhere near as fun as their console counterparts that I was more exposed to.

A year later, the computer lab at my elementary school had quite the upgrade. A classmate showed me a discreetly installed copy of Marathon 2 on the new computers, and I thought, “Holy crap, this is amazing!” I had never seen such a visually interesting 3D game like this in person, and I was enthralled. To be honest, my exposure to games like this had been minimal; my family has always been relatively poor, so I had always been stuck renting Genesis and SNES games for two days at the most. And my gaming magazine purchases were usually limited to only one or two per year. So seeing a game like this move so fluidly made me want to check out what other games computers had to offer. Suddenly, I found myself paying more attention to the computer game aisle whenever I was at an electronics store. I knew that if and when we got a new computer, I would get a chance to finally try these games.

In October, that chance arrived. My father purchased a pretty decent Hewlett-Packard PC, along with a Diamond Monster 3D graphics card, per a friend’s suggestions. The computer came with a few great preinstalled games, such as MechWarrior 2: Mercenaries and SimCity 2000. These games were certainly enjoyable, but at this point, I was used to the graphical prowess of the Nintendo 64 and PlayStation. And while the graphics and frame rate of these PCs games were certainly better, they did not have that awe-inspiring power of Marathon 2.

This would change, however, with a little game called Jedi Knight: Dark Forces II. I hadn’t read a single preview of this game. All I knew was that it had first-person lightsaber combat, which I thought was the greatest thing ever in a videogame. My brother agreed, and he bought me the game for Christmas. It was certainly fun. Ultimately, I clocked in more hours on this game than almost any other game I’ve ever played. This was due large in part to an online community I discovered the following year when, for some reason, I entered the game’s title in a search engine. 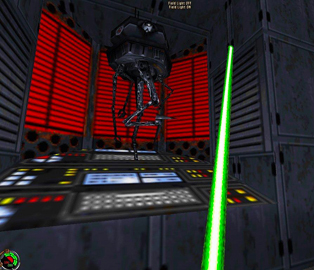 That was the day I discovered modifications. I found that I could change skin textures and even full models. There were new maps to play, including some great deathmatch maps that I would play locally with my nephew. At the time, I wasn’t familiar with online play. I knew it was possible, but I never knew how until I started doing some reading on a popular Jedi Knight forum. After that, things changed for me. I no longer needed friends to come over for multiplayer gaming, nor were we limited to only four players. I now had the whole screen to myself but could still communicate with these other players.

I was rapidly learning about many different aspects of not just this game but other games and the Internet, as well. I learned what zip files were, how to use IRC and how to install mods. I made my first skins using paint program trials and attempted making my own terrible single-player level with custom enemies I downloaded, as well as a variety of other things – many of which I still use to this day. I learned a lot from reading tutorials and comments posted by the community, and I learned an ethic that I hold dearly to this day: Never stop learning. Always try something new. If you’re terrible at it, just say, “Oh well,” and move on to the next attempt. I have never released any of my work, save for one or two mediocre maps, but I continue to make little tweaks with a texture or effect here and there.

My first real gaming PC opened my world to all-new possibilities. The freedom to be able to customize gameplay with the use of mods fascinated and intrigued me. Even to this day, my favorite platform has always been the PC. This has led me to pursue careers in the gaming field and has long since been my creative outlet with anything from programs to art. I try to get the most up-to-date models and gaming hardware so that my experiences with games and computer graphics are always optimum and fresh. Looking back, I see how much PC gaming has evolved, but I am always excited for what it might have to offer in the future. All thanks to my first gaming computer.