“If you say so,” said the lady in charge of taking song choices for the karaoke at a local bar. She was the gatekeeper, in charge of making weird faces when would-be karaoke singers chose the wrong song to sing to a mix of older regulars and younger hipsters.

“Is that a bad choice?” asked Jeff, who had volunteered to go first in our group of four. None of us had really done this before, so we were open to advice.

“You want something popular and timeless; something you sang with your parents growing up. If you choose something newer, you’ll get this table of young people over here, but you’ll lose the rest of the older people in the bar. You need to know the lyrics. You don’t want to be glued to the monitor.” What began as a lark became an ordeal. Jeff and I took a step back and started thinking really, really hard about our choices. 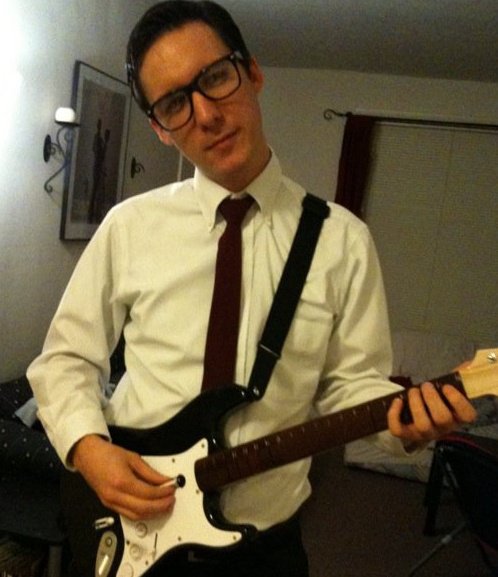 After poring over a list of thousands of songs, I asked the gatekeeper if Weezer’s “Buddy Holly” was a good choice. “Sure, that’s a good enough choice. I think enough of these people will know it.” It was settled, and as far as song choices go, it was kind of perfect for me. When you pick a song for karaoke, it’s sort of like picking an avatar: it’s a reflection of who you are and what you stand for. And, uhm, who you look like; in my case, “just like Buddy Holly.”

Here are some things I have done in the past to prepare for this moment: I sang and played bass in a band during my high school years, did frequent solos in high school choir, played Rock Band several times with friends. Yet, walking up to do karaoke in front of a bar full of spectators, I realized that I was not remotely prepared.

Karaoke is played out in TV shows and movies as some haphazard whim, as if all that is necessary is to simply walk up to the mic and let yourself go. This is not how it worked for me. I knew “Buddy Holly” like the back of my hand, but there’s one area in which I wasn’t as prepared: stage presence. In my high school band, playing the bass WAS my stage presence. In choir, I was expected to stand perfectly still, hands by my side or behind my back. Here, I found myself rocking back and forth like some kind of inconsolable psychiatric lost cause, holding the microphone with both hands as if it was trying to escape. I hit every note, sang every lyric, but the internal monologue in my head raged on and I inflicted on myself a sort of bizarre self-consciousness I hadn’t experienced in month. I understood perfectly that I was supposed to be doing things up there – something fun, surprising, exciting. But I had nothing to do. I could come up with no gesture or movement that I wasn’t afraid would make me look utterly stupid. I froze – and apparently, when I’m singing, freezing transitions seamlessly into aimless rocking.

I don’t mean “Rocking!” I mean rocking: back and forth, back and forth from one foot to another, like a rock-star Weeble. The whole song.

Still, it was pretty darn satisfying to have the table of younger folks in the front cheering me on and singing along with the chorus like it was the greatest thing they’d ever seen. That’s the amazing thing about karaoke: expectations are lowered significantly and the audience is easy to please. All they ask is that you sing a song they like and try not to ruin it. When I was done, a number of people I didn’t know complimented me. No one mentioned the rocking. I’m not going to lie: it was nice.

But what most of my friends do instead these days is play Rock Band in our living rooms. More often than not, none of us sing. When we do sing, the time leading up to the song flies by in a few seconds, time spent merely choosing a song we kind of know and getting on with it. There is no agonizing over what will please an audience or whether we know the song. After all, Rock Band is all about diligently keeping your eyes glued to the screen and the only audience present is generally obsessed with playing their own part.

At the karaoke bar, failure is the default state. Anything else is a miracle worth praising and singing along to.

That is the worst part of playing Rock Band – that moment you realize that even though you might be playing the game with several of your friends, you’re not nearly as interested in each other as you are in getting your own part right. The guitar player pulls off an amazing solo, and waits for acknowledgement of his achievement, only to notice the drummer banging away and the singer trying to nail the cowbell. The singer finishes singing the song perfectly, but the drummer and the guitar player are too excited about their high percentage to care. At the end of the song, you all compare scores and move on.

This is what it’s like to be a part of a videogame band. You do what you do well for no other reason than personal achievement, a high score. You forget about one another until a distinctly visible failure surfaces: the audience boos loudly, the song falls apart, and all eyes turn to the weakest link. You assume success and acknowledge only the worst.

But at the karaoke bar, failure is the default state. Anything else is a miracle worth praising and singing along to. The audience just wants to feel that you tried. During those few minutes, you have the undivided attention of everyone in that bar. Rock Band is all about teamwork. That’s nice and all.

But karaoke is about glory.

Oh, wee-ooh, Richard Clark only looked like Buddy Holly on Halloween, but his hair is pretty awesome every day. Watch him tweet about it @DeadYetLiving.