Paper Mario, a 3D game series with 2D characters, has called me a nerd and rubbed my face in it. The series hit a particularly upsetting note with Super Paper Mario, an RPG shaped as strongly by homage as it is by a rare combination of self-awareness and self-deprecation. But I was willing to let Mario and Bowser poke holes in their thin narrative canvas because hey, at least it wasn’t taking its own nonsense too seriously (I’m looking at you, Star Fox Adventures) and they were leaving me out of it. Then there was Francis.

Maybe Francis is some cautionary tale … and is far removed from the specific passions that make nerds nerdy.

This is like that part in a Tarantino movie where the clever protagonist critiques beloved filmmakers, except Mario’s cone of silence protects some part of the tradition that made his media so iconic. It’s a modern-day game character, portrayed in faux-2D, trouncing time-tested cronies in a 3D world made to look like its 2D ancestors. How this thing hasn’t created an illogical wormhole yet is astounding.

Fort Francis occupies the retro-stylized hill country of Super Paper Mario chapters 3-4, providing the backdrop for the death of the gamer. Occupying Fort Francis is Francis, a peculiar nerd stereotype wrapped in a boss wrapped in a chameleon, stowing away behind a cat-lock doorway (exactly what it sounds like) to photograph Mario’s captured Pixl companion. To gain entrance to his chamber, Mario has to switch places with the capable, more-heroic Princess Peach, namely because “Only Master Francis and ‘totally hot babes’ are allowed to enter.”

A short conversation later and a panicked Francis boots his “Nerr to Babe Interface,” swoon.exe, launching a short segment done in the style of an early Japanese dating simulator game. If this sounds off-putting, that’s because initially it is. There’s nothing about this that feels like a Mario game, and gaming enthusiasts (who might cringe at the not-so-subtle approximation “nerr” as I did) are starting to feel like the butt of an extended joke.

And so the joke extends into a conversation-based game, allowing players to choose how Peach might react to Francis the sweaty nerr’s bumbling advances. The characters square off against each other in the top half of the screen, and wavy, sometimes jittery text floats across the bottom. Views are framed in hot pink with a drifting pink background, and pop-up menus display conversation options for both the player and the computer “opponent.” For reference, the Persona series comes close to this, but it’s more like My Neighbor Girl and other, more traditional Japanese dating sims. Yes, I’m still talking about something that happens in a Mario game.

So assume that I’ve agreed to go along with the conceit of this moment in Super Paper Mario. Assume that I’m willing to participate not because I just want to get past this to the looming boss battle (although I’m guessing this would be a common response), but that I’m invested in the outcome of the conversation for a myriad of potential reasons. Maybe I’ve found some empathy with the geek lizard figure as an obvious, painful reflection of the nerd culture I openly embrace. Maybe I despise what I see in him and reject his well-being. Maybe I don’t even get that this represents a subculture and just want to see the bad guy get it.

Whatever the case, there seem to be three consistent conversation paths through this mini-game: coyly accepting, angrily objecting and outright evading. Francis’ responses vary for a line or two of dialogue based on these choices, but he ends up choosing the same reactions regardless. Here’s an example of how part of the conversation might go: 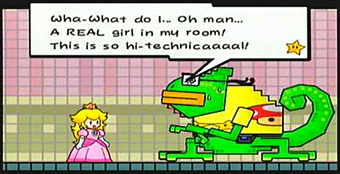 Francis: Automatically chooses Speak, Talk to Hot Babe, “What is your name?”
Peach: Chooses ‘Tell me your name first,’ “If you’re going to ask someone’s name, shouldn’t you introduce yourself first?”
Francis: “Oh yeah… Sorry about that. I’m Francis, master of this castle. (Oooh, she’s a real stickler for etiquette. Reminds me of my mother…)” Francis remembered his dear old mama! Francis’s passion leveled up!

First of all, if that extra possessive “s” on Francis’ doesn’t get to you…

Second, the mama’s boy nerd stereotype rings pretty clearly here, and not much else takes form. The purpose of the rest of this whole bit follows the same arc. There’s some player choice here, but it couldn’t matter less. This is about trying to get me, the player, to laugh at this caricature, and the game makes a considerable effort to achieve that unstated goal. Even the format of the dating sim, in all its alien obscurity, reveals a piece of that intention.

To say the genre of this segment is entirely responsible for its outcome misses the much more daunting component of Francis’ dialogue. In fact, Nintendo hasn’t been averse to genre-blending moments before, like in Kirby Super Star’s old-school RPG battle or Super Mario RPG’s Quiz Time. The effect is, rather, a combination of the form and the content.

What’s most curious about this combination, I’ve felt, is the potentially polarizing response of different audiences. I’d categorize myself as a part of the nerd population of Super Paper Mario players and testify to a generally negative response. There are also children who’ve played the game, no doubt, whose responses are under-informed about the material being satirized. Then there are the players who understand the conceit but would not identify themselves as “in defense of nerd-dom.” I’ll return to the conversation to explain why this distinction is so crucial.

During the middle of Peach and Francis’ repartee, his automatic choice response system kicks in, and I see a number of generic nerd references that he does not pick but have farcical potential. After selecting Inventory, then Use Item, here’s what appears (caps, misspellings and all):

The non-specific nature of most of these items is precisely what I found so offensive. As a nerd, I’ve never communicated excitement about a “new videogame” or a “limited-edition DVD set” – instead, I’ve championed (for example) Metro 2033 and its starved, oppressive horror, or my 20-disc set of Bond flicks on Blu-ray. I think I can speak for gaming enthusiasts everywhere by saying that we aren’t nerds for the category “videogames”. Individual games, TV shows, comics, movies and books are at the heart of being a nerd, which is why the term has become such a broad blanket for “anyone who really, really likes any one thing.” The notion of nerding out for food is, to me, as frustrating as the nerd approximation that is Francis. 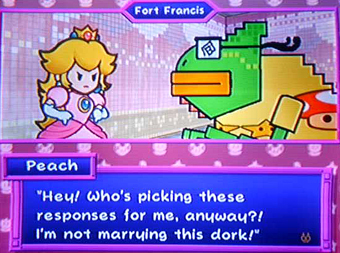 So if the generic nerdisms aren’t intended to woo me, then surely they must be for those who wouldn’t dare to defend the media acclaimed by nerds. On the off chance that this portion of society did get Super Paper Mario, then played it long enough to make it to this interactive mock-manga, would the laughable state of DVD-set-loving nerds be enough to buoy the experience? I don’t know, because I can’t find these people anywhere.

Maybe I’ve overreacted, I then think, and maybe this whole thing is just a lighthearted, if misguided, series of jabs intended to inject some humility into the gaming community at large. Maybe Francis is some cautionary tale, or a caricature of a caricature that will never exist, and is far removed from the specific passions that make nerds nerdy. Maybe I could stand to stop reading so much into these videogames and try to just enjoy them already. Just chill out or something.

Francis: “Wow, we are like, so perfect for each other. It’s destiny! We should get married!”
Peach: “So how much do you make? Hey! Who’s picking these responses for me, anyway?! I’m not marrying this dork!”

And the wall came a-tumblin’ down.