Previously, Len Wein kept his Before Watchmen series at a distance from Alan Moore’s source material. Ozymandias read more as a character-driven tale rather than a series based upon developed heroes and villains. In this issue, however, that gap closes completely, and Wein makes a smooth transition from his own work to Moore’s.

What I found most impressive about Ozymandias was a lack of fighting and combat, yet complete engagement. The comic is more concerned with building the character’s history, while previous issues loaded up the action. The book is dialogue full, but every word and conversation feel necessary, particularly the moments between Adrian and President Kennedy.

Furthermore, Adrian’s internal dialogue is spot on. Readers can see the skill with which Lee captured a character he didn’t create, but one which he deftly controls. And while the book moves between several important historical moments, the clarity and pacing is flawless. Regardless of the excess of words, the book never becomes a tedious read.

Jae Lee’s art is equally impressive. I loved seeing his Nite Owl illustrations. Whereas other Before Watchmen artists have floundered when having to depict historical characters, Lee does so with aplomb. His characters are meticulously illustrated, and the panel design is one of the most visually appealing parts of the book. I couldn’t help but smile when former Watchmen characters appeared, because in Lee’s capable hands they take on a new life.

Given the connections made in the final pages of the issue and that Wein has two more issues to finish his story, I’m wholly interested to see when he shows how Adrian eventually comes up with his “master plan.” From what we’ve seen so far, I have no doubt that the writing will be spectacular and that readers and fans will be more than satisfied by the end result. 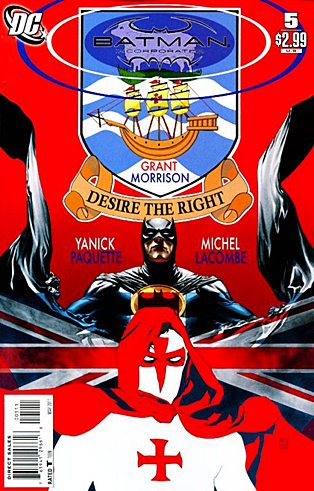 When Grant Morrison was writing Batman, he told a story in issue #666 about Damian Wayne taking over the mantle of Batman and trying to save a Gotham City that was rotting at its core. In this issue of Batman Incorporated, Morrison returns to this fictional/futuristic world to tell the story of what happens when Damian becomes Batman, and why Bruce can never let this happen.

I love Damian Wayne in his current form, but as Batman, we see Damian as a hero. The rash, arrogant child he was is replaced by a confident doggedness aimed at doing whatever it takes to save Gotham. The problem is that Gotham, at this point, is beyond saving. Yet Damian, much like Bruce, refuses to give up.

As the comic goes on, and the threads of Damian’s plan unravel, we see a flawed and human hero who realizes that he failed to do what his father had done so successfully all the years he was Batman. Morrison removes all the vanity and narcissism so that readers are given a much more mature Damian Wayne, one who would make a great Batman – but who would also bring an end to Gotham.

Chris Burnham’s mixed palette is superb, and the overwhelming chaos is excellently depicted. Set pieces have gritty, worn designs creating a palpable sense of decay in Gotham. Additionally, action sequences create consistent tension as Burnham uses an excess of tight panels to give a feel of urgency to the story. He knows when to give the panels an edge and when to soften his art, depending on the effect Morrison needs conveyed.

Forget Doc Ock; Morrison is the real master planner. Given his ability to lay the seeds for future conflicts years in advance, one can only wonder where he will take Batman Incorporated next. He clearly has a firm grasp on how he wants to make the characters look, as well as what lies ahead for them. With the fluidity of movement between the present and future in the book, readers should see that Morrison is not afraid to show us where he’s headed, even if we have no idea how he’ll get there.

But at least we’re assured an entertaining ride. 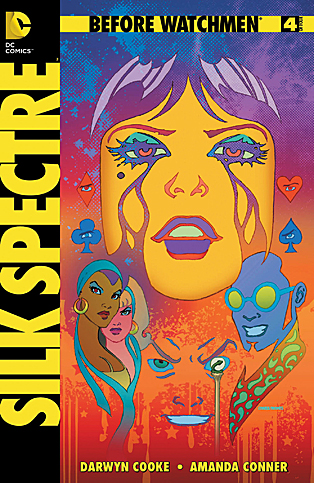 Bannen’s Book of the Week: I’ll start this review with a clear statement of its excellence. Silk Spectre is a great read due to its art; it’s gorgeous from the first to the last page, complete with clear and defined illustrations, as well as beautiful colors and expertly drawn images. The book has an equally solid story, but if I had to choose one thing to make it the must read of this week, it would have to be Amanda Conner’s artwork.

Writer Darwyn Cooke wraps up his story by tying up all the loose ends, and by the end of the book, it’s clear to readers how Laurie Juspeczyk became the woman we see in Watchmen. The bitter, self-assured hero is evident by the end of the issue, and the reasons for her persona are equally apparent.

Much like Len Wein, Cooke finds a way to create an organic transition to Watchmen by the end of the book, one that fits in nicely with the source material. Laurie’s final line is a bit of a supposition on the part of the writer, but given what’s come before, readers can’t help but give a knowing chuckle to Laurie’s motives (which involve Jon Osterman).

I’ll state again that Amanda Conner’s art sells the book. This issue has more panels than any of the previous issues, yet each illustration is as sharp as the last. Regardless of the amount she has to draw, Conner’s art is lucid. Faces depict emotions with perfect accuracy, and the soft curvature of character designs is enough to keep readers coming back to see more. Several pages require a bevy action, but the crispness of the art is never lost.

Cooke’s masterful storytelling is only one more reason to love Silk Spectre. Laurie Juspeczyk is given new life through the series, and we get to see her before she becomes the acerbic character we see in Watchmen. Cooke could have used six issues so the climax would have more room to breathe; however, this is more a selfish critique, as I would love to see one more issue drawn by Amanda Conner.

While I wouldn’t go so far as to say that Silk Spectre will influence my future readings of Watchmen, I will say that the talent DC put together for this series deserves all the credit due for creating a truly great story.