There are few franchises you could be more cynical about than Angry Birds and Star Wars. Each has been squeezed within an inch of its life for every penny they can have wrangled from them. The idea of the two coming together as one hybrid product sounds like some kind of sick joke about the state of the gaming industry. Like someone just took the two most soulless franchises in existence and mused about how funny it would be if they joined forces.

Perhaps weirder than the game’s existence is the fact that it’s actually quite good. Though, really, that shouldn’t be a surprise at all. Despite how easy it is to hate Angry Birds, it has always been a slick, enjoyable and polished experience. Its games have always been an absolute joy to play, and their accessibility to a broader audience than most games can’t be doubted. There’s such a pleasurable feedback loop of just flicking that bird back and watching simulated physics play out in destructive ways that Angry Birds has always tapped into perfectly. 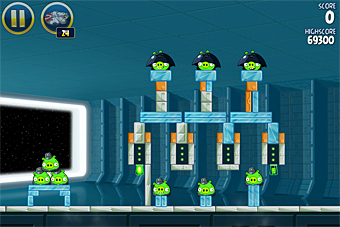 Further, every new iteration in the franchise has tweaked the fundamental formula just enough to create interesting and fresh challenges but not so much as to complicate that central simplicity. Most recently, Angry Birds Space uprooted the franchise’s basic mechanics with planets and orbits and gravity-less space, showing just how malleable these simple mechanics are and how far they can be pushed.

Each Angry Birds game has been gracious in its free content, too, despite the snark Rovio gets for its micro-transaction models. Each Angry Birds release regularly sees updates that offer dozens of new levels for free. Ultimately, as easy as it is to hate the thing that’s popular, it’s hard to really deny that Angry Birds is a tremendous game with tremendous reach.

Angry Birds Star Wars further shows just how strong the franchise is, just how far it can be stretched without damaging its core. From the Star Wars universe, Angry Birds takes several inspired power-ups and creates marvelous new levels in which to use them. With a tap, Luke-bird swings his lightsaber in an arc, cleaving through solid stone without losing momentum. Obi-Wan-bird can push a tower over with a tap of the force. Han-bird can fire off shots from his laser, ricocheting off metal surfaces to get to pigs in hard-to-reach places.

The game implements worlds of both the original Angry Birds style and the more recent planetoid levels of Angry Birds Space. In space, the new powers allow even broader uses. Fly an Obi-Wan-bird past a planet and push a series of asteroids into the gravity, raining stone down on some stormtrooper-pigs.

Truly, Angry Birds Star Wars is one of the best iterations of the Angry Birds franchise to date. But it’s telling, perhaps, that “Angry Birds” comes first in the title – this is an Angry Birds game, not a Star Wars game. Where Angry Birds proves its strength, Star Wars shows just how willing it is to be dominated. The universe that has enthralled generations is here in allusion only. It’s in the superficial look of the game, the aesthetics of the levels, the toupees the birds wear. While Angry Birds comes off stronger than ever, Star Wars just seems a little bit pathetic, selling itself out to a game about birds slingshotting themselves at pigs.

Ultimately, Angry Birds Star Wars isn’t a tale of two franchises coming together, but of one powerful, unstoppable franchise in its prime subsuming an aged franchise that should’ve been put down years ago. Angry Birds is Darth Vader, whereas Star Wars is the commander who just lost track of the Millennium Falcon. While Angry Birds shows us just how strong it is, Star Wars shows us it is willing to sell itself out as a few toupees.