Last month, Rayman Jungle Run was released on the App Store. It’s an absolutely beautiful and stunning auto-runner that takes the art and mechanics from the console title Rayman Origins and reworks them in a fresh and creative way that translates perfectly on an iOS device.

I purchased Jungle Run as soon as it was released. However, it was some time before I would actually play it. When I first loaded up the game, the splash screen popped up, showing the companies that created the game. There, alongside Ubisoft and Ubi-Art, was a logo for Pastagames. I looked at that squiggly little design and tried to remember why it looked so familiar. Then it all came rushing back. They were responsible for my very first iOS love affair: Pix’n Love Rush. Immediately, I closed Jungle Run and rummaged through my dozens of old game folders to find Pix’n Love Rush. 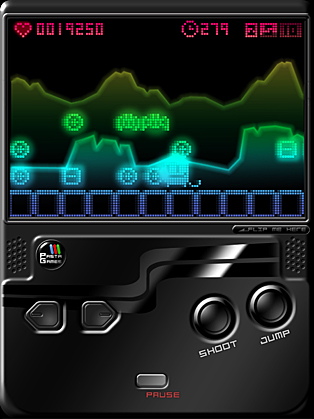 When I purchased my first iPhone over two years ago, Pix’n Love Rush was the first game I became obsessed with. It’s just as much of a joy to play now as it was then. It’s a platformer that, much like Jungle Run, is concerned more with accuracy of movement than with brute speed. One play of the standard game mode takes five minutes. Across these minutes, the player’s pixelated cat-like character jumps from micro-stage to micro-stage, staying alive, collecting coins, killing bats and jumping between platforms until the next stage.

Collecting coins and killing bats increases a multiplier that drops with each hit taken. High scores require the player to perfect each level (kill every bat, collect every coin) without making mistakes.

Like any good platformer, it’s the way the game’s simple mechanics interrelate that makes Pix’n Love Rush special. It’s not quite a double jump, but the cat can do a mid-air jump as long as it didn’t jump to get into the air in the first place. That is, getting to different areas or making certain jumps requires the player to fall into midair and then jump, harking back to the extended jumps possible in Donkey Kong Country by cartwheeling off a ledge and jumping a moment later. Then there are the cake crumbs the cat can spit to take out bats, which will fall back down on your head if you aren’t careful.

Pix’n Love Rush is also just a beautiful game to look at, with retro, pixel-art graphics that glow with a near-material vibrancy. Further, the aesthetics change with each multiplier, giving a nod to a different gaming platform from yesteryear such as the Game Boy, Virtual Boy, arcade, or Tamagotchi. More than mere window dressings, the ever-changing visuals can make the game increasingly difficult as your multiplier increases.

Unfortunately, like many early iOS games, Pix’n Love Rush does suffer from a dependency on the on-screen buttons. However, this problem is creatively dealt with on the iPad version (Pix’n Love Rush DX). Instead of being played in a landscape position, the iPad stays in portrait, and the game uses most of the screen as a virtual Game Boy-esque device. While the game itself plays out in the top section of the screen, the buttons are displayed on the bottom, in easy reach of your thumbs and nowhere near the “screen” itself. It’s not perfect (there’s still no tactile feedback from the buttons) but it allows the player to see what is happening, at least. It’s a creative response to the touch-screen problem that I would love to see more developers run with.

With Pix’n Love Rush and now with Rayman Jungle Run, Pastagames has proved itself as one of the most competent yet modest developers of platform games for iOS, creating games that are as enjoyable and tight to control as they are aesthetically pleasing.