At first, Eliss seems kind of like a guy who smiles at you while he puts out a cigarette on your knuckle. Its lightheartedness and flippancy seem to hide a frantic, unforgiving and soul-destroyingly hard game. But as frustrating as it is, you just can’t stay mad at it.

Crafted by indie developer Steph Thirion, Eliss is quite old in iOS years, releasing in the dark ages of 2009 when the game-playing potential of iOS devices was only just dawning on developers. It received quite a bit of attention and even an IndieCade award and an IGF nomination when it first came out but, sadly, it has not aged too well. It has yet to receive updates for multitasking, closing every time you leave the app, and you are unable to play your own music while the game is open. Yet, when it first came out, it was a thing of wonder and was one of the first games to really use the iPhone’s multi-touch functions in unique, gamey ways. If you missed it when it first came out, it is well worth your time to go back and play today. 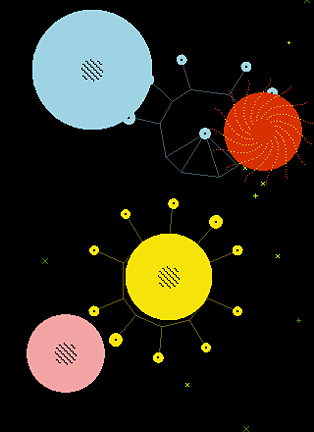 The gameplay is simple enough to describe: spheres of various color and size appear across the screen. They can be dragged around the screen, and if two spheres of the same color touch they will congeal into a larger sphere. Spheres can also be split into two smaller spheres by stretching (the thing you do with two fingers when you want to zoom out on a photo or a website). Occasionally, flower-like things of various sizes appear, and a sphere of corresponding size and shape must be placed on the flower. Do this enough times, and the level is complete.

The difficulty is that if two spheres of different colors collide, they begin to drain each other of mass and you of your health bar. Keeping them apart is easy enough at first, but after only a few levels screen space becomes incredibly tight, and spheres start appearing faster than you can get rid of them. In no other iPhone game have I had as many fingers on the screen at once. Keeping three blobs apart while trying to split a fourth in half and then moving them all around to get the small sphere into its flower is an intense act of micro-management and almost like a complex game of finger-twister. On later levels, you will find yourself placing the device down on a table or in your lap so you can use fingers from both hands—especially once black holes start appearing, pulling all the spheres together.

It would be stressful if Eliss wasn’t so… nonchalant. The bright colors and playful indie bleeps and the way things just bounce around the screen are too lighthearted to stay mad at. At first, it almost seems like a weird jarring between style and mechanics. But, really, everything about Eliss is playful. To play it is to play with your phone, to dance fingers and hands over the screen in complex routines of dragging, stretching, and swiping that few other games ask for. It’s not a smiling guy putting a cigarette out on your knuckle; it’s a clown laughing while it squirts water on your face from a flower. It’s hard, and sometimes it feels like it is picking on you, but it just looks and sounds and feels too happy for you to really do anything other than to smile with it.