I was interested in the Action Comics annual basically to see if anyone else could handle Superman as well as Grant Morrison. The short answer is no, but this is due more to the quick-fix storytelling that occurs in the latter part of this book. Writer Sholly Fisch did have me early on, but when Superman defeats his enemy by wearing a radiation suit, I lost all interest in the comic. 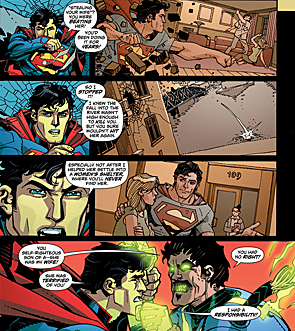 The annual centers on an irate man who was beating his wife and was stopped by Superman. So he decides to take revenge by volunteering to be irradiated by kryptonite. Not the best of storylines, I know, but it works for the first half of the comic. Who better to fight Superman than a crazed ex-husband?

The problem is that the villain, known as the K-Man (I know, I know) is made out to be an extremely powerful enemy, yet he’s dispatched with a well-placed punch. Plus, if a guy is seeping with kryptonite, he should easily defeat a hero whose powers are zapped whenever kryptonite is around. He isn’t, however, and his downfall comes at the hands of an awkward team-up constructed out of thin air.

Cully Hammer’s art is the stuff of which Saturday morning cartoons are made. I don’t mean this in a negative way – the art is clean and detailed. But while Rags Morales’s neat lines and smooth illustrations grace the regular Action Comics issues, Hammer’s blocky and pointed designs are a garish transition in the annual.

My biggest issued with Action Comics Annual #1 is that it feels like a throwaway story. While other DC annuals attempted to make a connection with ongoing stories, this book could be easily tossed aside without any canonical necessity. And if the creators aren’t enthused about the project, why should we be? 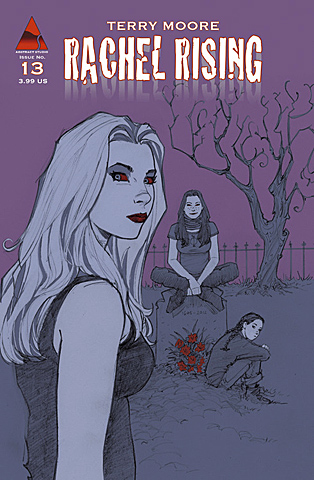 Oh, Terry Moore, can you do no wrong?

Here we are, 12 issues in, and it appears that Rachel Rising is in it for the long haul. The book is a mixture of horror and humor, but given the sinister nature of the story, I’d have to say that Moore goes for darkness over light every issue. And now that we’ve seen characters take brutal turns in savage directions, it appears that no one is safe in this story.

While the first few issue had an element of humor, the past few have been outright horrific. This includes issue #12, which amps up the creep factor, especially when the demon Malus makes its presence known to Zoe. Moore moves the story away from Lilith and gives readers a new reason to fear the supernatural when we see just how transferable a demonic power is.

As the writer and artist of the book, Moore is masterful at pacing the comic, using establishing shots for impressive effect as well as communicating character emotions through impressively detailed facial features. There are times where Moore moves in for tight close-ups, and these moments are where his skills as an artist and storyteller really shine. Not a single panel in the book is wasted, and Rachel Rising is a comic that I could pick up any given day just to look at.

I thought Rachel Rising was going to be a limited series, but it is clear that Terry Moore has long-term plans for the book. I’m more than fine with this, as I have yet to be disappointed by either the story or the visuals. And the final pages give the comic a climactic feel that sets the stage for what is sure to be an impressive showdown.

Given its story and equally strong art, I’ll read this comic as long as it continues to be published. 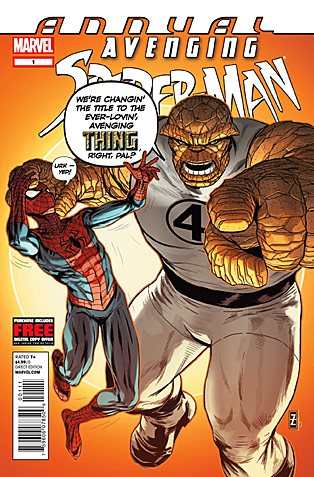 Bannen’s Book of the Week: One thing Avenging Spider-Man has done consistently well is to keep its humor level and storytelling high. Except for the last arc, I’ve enjoyed every issue this title has printed since its inception. And now, a year later, we’re at annual time. So how does Avenging Spider-Man reward its longtime readers?

With a love story between Spider-Man and the Thing. I’ll explain…

Save for a few introductory panels, the comic is really about two brothers who, while using a metal detector to dig for buried treasure, come across a piece of alien technology that causes those nearby to go into a violent frenzy. The result of this is a New York where everyone is fighting everyone else. The tale lacks any real depth, but that seems intentional. The story is lighthearted and comic, and it’s a welcome divergence from other Marvel books currently on shelves.

Given the amount of dialogue in the story, one would expect the comic to feel bogged down. But writer Rob Williams keeps the story buoyant and playful. At no point is Spider-Man really in any danger. As readers, we are more or less treated to a wacky tale of emotions run amok. And Spider-Man and the Thing kissing when the alien box goes from hate to love.

Brad Walker illustrates the comic, and while some of his shots are heavily inked in the spirit of Darick Robertson, some of his other panels are so detailed that they are really works of art. Close-up shots are given full treatment so that they are beautifully colored and exceptional. Walker’s distance shots are nowhere near as good as his tight panels, and he definitely left me wanting to see more of his art.

Avenging Spider-Man is the non-canonical book fans love to read. It has a fantastic mixture of great art and humorous storytelling. Plus, given its extensive length (being an annual), the comic never loses its interest. If anything, I wanted to see more of the brothers and their alien box.

Or maybe I wanted to see more of Ben Grimm and Peter Parker’s love story.

Either way, Avenging Spider-Man is my pick of the week.

The Hero and the Horror