I was really looking forward to this comic. Scott Snyder is one of my favorite comic authors. I love both Detective Comics and American Vampire. But Project Superman suffers from the same problems as every other Flashpoint tie-in. It seems as if the purpose of all of these alternate stories is to show that the DC Universe is destined to be filled with its current cast of characters. While Project Superman is no different, it doesn’t necessarily tell a bad story. In fact, Snyder does a great job of developing his characters while saving the introduction of Big Blue for the final page.

Snyder makes parallels to the super soldier serum that turned Steve Rogers into Captain America. In this story, we’re introduced to a soldier named Neil Sinclair who volunteers to undergo an experimental procedure to become a metahuman. He’s bound by a single motto: “Attachment leads to suffering.” (I’m sure this will come up later in the series). He’s given up his old life to become a hero. The problem is that the experiments do things to him that no one anticipated. They knew he would become strong, but his eyes change color. He also heals faster than they expected, so Sinclair seems to be beating their best projections.

But the process also turns him into a monster. And here is where Snyder makes a Frankenstein connection. Sinclair is their creation; they’ve played God and now have to deal with the consequences. On his first mission, Sinclair goes apeshit and kills his entire support team (a sequence nicely illustrated by Gene Ha – complete with flying eyeballs, teeth and brain matter). In the end, they have to lock him up lest he do any more damage. And then Superman arrives – as a baby rocketed to Earth. In the end, we’re left with Sinclair chained below ground while a newborn reaches his arms out of his rocket above ground.

This is my problem with Flashpoint. There seems to be some destiny driving things into place. The same thing happens in Flashpoint: Hal Jordan – Hal encounters Abin Sur at the end of the issue, and Abin offers Hal the ring. These stories would work much better if they didn’t need

to remind us of the way things were and then go on to show us why things need to be that way. Snyder’s done the better job so far. Neil Sinclair is scary when he’s attacking. Even the people around him don’t want to get too close. Having Superman arrive at the end of the issue kills the mood.

But with the way Snyder’s written this so far, I have hope that things may turn out differently. Maybe for one issue we’ll get to see Neil and Kal-El interact before they square off in the final issue (which I’m sure will be a wicked knock-down-drag-out battle). I enjoyed Flashpoint: Project Superman more than the other Flashpoint tie-ins, but it still shares the same overall story weakness. I’ll be glad when Flashpoint ends. 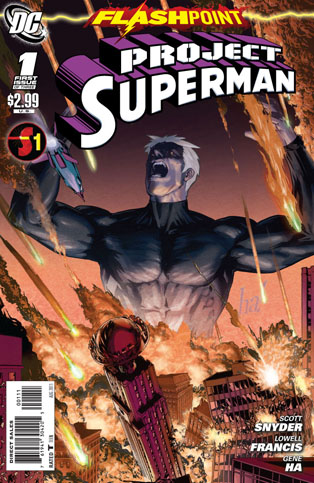