While perusing this week’s new comics, a giant cyber-bear, an Eleventh Doctor-looking kid and a woman in a leopard print lined coat caught my eye.

The Intrepids # 1, from Image Comics, has a one of the best tag lines I’ve read in a long time – Mad scientists are a disease. Meet the cure.

Writer Kurtis J. Wiebe and illustrator Scott Kowalchuk weave together elements of Universal Monsters, Doctor Who, 1960s Kitsch and dozens of other influences into a twenty-four page explosion of robot animals, cybernetic enhancements and sexy dames with guns.

The Intrepids are a group of orphans brought together by the mysterious Dante. They work as a team to stop the mad scientists from overrunning the world. The book is a lighthearted yet surprisingly violent romp through the trappings of B-Movie science fiction with a hint of James Bond. Honestly, it feels a lot like the classic Arnold Drake & Bruno Premiani Doom Patrol comics (probably due to Mr. Wiebe drawing inspiration from Umbrella Academy ) and that is a very good thing.

Given that we live in a world where sparkling vampires and full grown werewolves with unhealthy crushes on newborn babies are prevalent and accepted in horror fiction, I’m happy to Mad Scientist is not emasculated! He’s just as crazy as he was before, only his toys are much more elaborate! 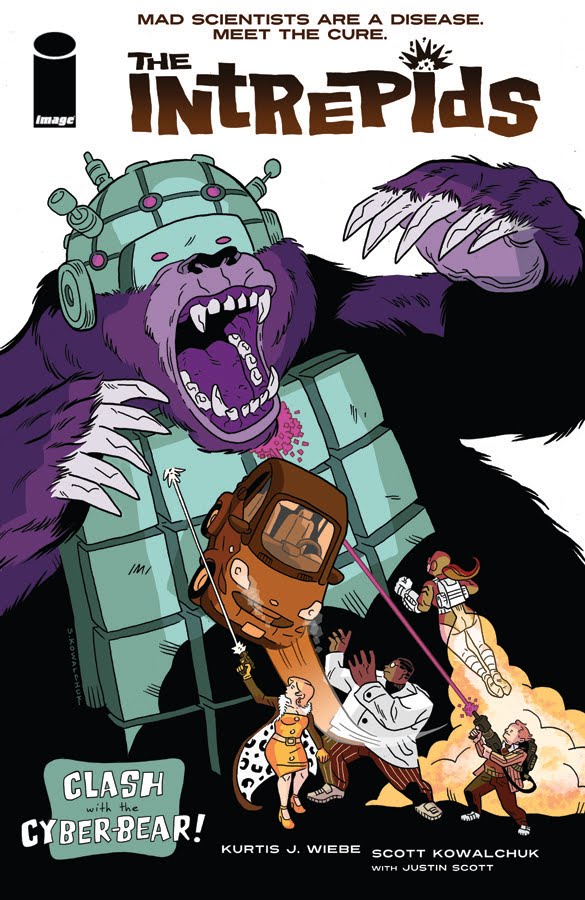 The first issue delves a bit into the team’s past as it relates to their present. While we have seen this narrative trick quite a bit, Mr. Wiebe’s script pulls it off nicely. The flashbacks are very organic. The script and Mr. Kowalchuk’s art pack a lot of story and character development into one issue.

An essential part of The Inrepids‘ success is Justin Scott’s coloring. He uses a lot of subtle, muted pastels which give the book an aged feel, like it’s been around for sometime. It’s much akin to the coloring work done on Casanova and the flashback sequences in the aforementioned Umbrella Academy. His work really brings out Mr. Kowalchuk’s pencils an inks nicely.

The first issue alone treats readers to a cyber-bear, super spy tropes, a mysterious benefactor and evil henchmen. The Intrepids isn’t a perfect comic book, but the first issue is a lot of fun and the series has a lot of potential. Yes, the beats are familiar, but the trappings are a blast! I really dug the first issue and encourage you, Dear Reader, to pick it up at your shop tomorrow.

God Is Dead and Aliens Do Not Exist