To be clear: I am not a fan of Scott Lobdell. I dislike Red Hood and the Outlaws as well as Superboy and Teen Titans. So when I heard he was writing Superman, I polished by boxing gloves and prepared to beat the snot of out his work.

So, is Superman great? No. Is it terrible? No. In fact, it is a surprising mix of impressive characterization and earnest storytelling, even if I found both the script and the art unappealing. 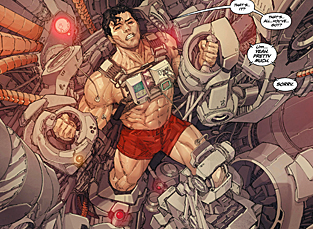 The real-life press made a big deal of Clark Kent leaving The Daily Planet due to his objection of their sensationalized storytelling, but this moment is really given a lot less fanfare than it should. It happens ­– and passes – without much flourish.

The more interesting parts of the story happen in the beginning when, for some reason, Clark is testing his strength as Superman, then at the end of the issue, when he first battles a Kryptonian demon and (subsequently) his cousin.

These moments work best due to the underlying enigma of the arc, and also because we see Lobdell doing more than just making Clark have sex with aliens on a beach (a general summation of his work up till now). Lobdell’s Superman is confident and powerful, yet a bit awkward; reading about Clark taking a stand at the Daily Planet is painful in how poorly it’s delivered (and received).

As for the art, I’m not a fan of Kenneth Rocafort’s style, but he has a lot of impressive detail. The battle with a multi-headed dragon is crisp and Superman looks imposing in his costume. But the majority of Kal-El’s action happens at a distance, which makes the art lose some of its precision. I like Supes kicking alien butt; I just wish I saw more of it.

While not a great comic, Superman #13 is more inspired than any previous issues. I only hope that Lobdell delivers in a way that makes him ­– and the character – relevant. People need a reason to buy Superman comics, and it seems like Lobdell is at least trying to do that. 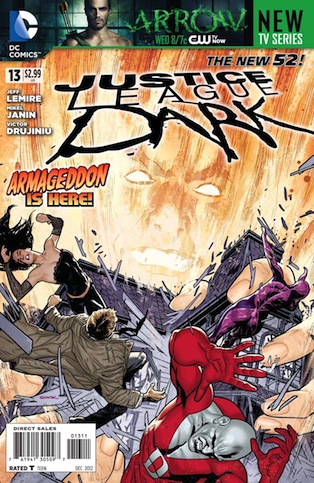 I only started reading Justice League Dark because of Jeff Lemire. His series Sweet Tooth is captivating and sad, and while I have very little knowledge of the magical side of DC (like Constantine, Zatanna and the like) I trusted Lemire to deliver.

I have yet to be disappointed.

Justice League Dark is a mixture of good story and great art, and while my knowledge is scant, Lemire is more than capable of bringing readers up to speed. Much like Geoff Johns, Lemire is developing his own detailed mythos for the book. He started his arc with the characters questing for the Books of Magic, and since then, each series mainstay has been forced to confront his/her own demons in powerful and shocking ways. I have never encountered Dr. Mist before JLD, but his character is both sad and deplorable. And he’s not the only one. Constantine is as unlikeable as he is charming, and Lemire makes us conflicted as to whether or not we feel for the occult detective.

But I think the real reason I love Justice League Dark so much is because of Mikel Janin’s art. His pencil work is clean but detailed, and he can draw both action and exposition scenes with such precision that regardless of what is occurring in the comic, the book is consistently engaging. This is also due to Ulises Arreola’s polished colors. They lack vibrancy, but that does not make them unappealing. If anything, they’re muted rather than drab, making the art consistent while not detracting from the story.

I do love Justice League Dark. Most comic readers know the “big” books, but when we get to see a skilled writer and artist team elevate a B-list series to A-caliber, there’s little choice but to applaud. 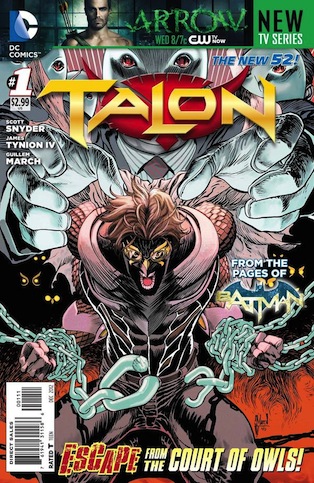 Bannen’s Book of the Week: I didn’t expect this book to work. To be fair, the villain turned hero concept has been exploited by comics for years. Think Venom, Catwoman or, more recently, Red Hood and The Outlaws. But for James Tynion to take Scott Snyder’s “Court of the Owls” plot and make a heroic character out of it? Daring.

And it works. Talon #1 is a fantastic book.

The main character, Calvin Rose, is every bit as aloof and dangerous as readers need him to be to hold interest; While he looks harmless, Tynion makes every attempt to remind readers that Rose is always a danger. At no point do we see him let down his guard.

Furthermore, the inclusion of the Casey Washington and her daughter (both of whom Rose spares in Talon #0) had me a bit worried for the future of the series. Children seem to muddy the waters a bit usually, as writers can never fully put the child in harm’s way, nor do away with him or her altogether (unless you’re Robert Kirkman). To see that those characters are, for now, given nothing more than a cursory reference shows me that Tynion is more concerned with developing Rose as a character than he is in making the situation bigger than the man.

Furthermore, Guillem March’s art is precise, powerful and detailed. The fight between Calvin and the female Owl is the set piece of the book, and the action never loses its clarity. The close up shots of characters are really where Guillem’s talent is evident – these moments are unfortunately few. Nonetheless, his ability is evident and the book is stronger because of it.

I didn’t expect to like Talon this much, but the book is a mixture of strong story telling and impressive art. Following Scott Snyder cannot be easy. But improving upon his groundwork? That is admirable.

Read Talon. You won’t regret it.