Since the death of his son, Batman has suffered a lot. Peter J. Tomasi, in particular, has taken it upon himself to explore Bruce’s grief in the wake of Damian’s death. He does so in a series of team-ups between an ever-erratic Bruce and whoever is willing to aid him in his strive for closure. But this issue finally provides the relief Bruce needs, and it comes from an unexpected source.

To start, I was a bit disappointed with the beginning of the issue. Tomasi pulls an old trick on the readers through a computer simulation, an aspect that nearly pushed me completely out of the story. But as the comic moves on, we see Dick Grayson try to work with Bruce to explore the “What Ifs” of their encounter with the Heretic. Dick shows Bruce the path towards a personal resolution, but Alfred provides the way. 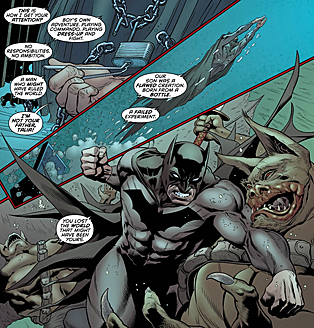 In the final moments, the comic takes on a new life, and we see Alfred’s own personal anguish and torment over what he could have done to keep Damian from ever being in harm’s way. It’s heartbreaking and emotional, and I have to confess to being moved to tears. Alfred has always been Bruce’s father figure, and to see his failures brought to such a harsh light is humanizing and painful.

This kind of writing is what makes Peter Tomasi such a great storyteller. His ability to convey the palpable suffering of his characters is the selling point of the issue. He’s strung Bruce along for some time now, but we finally get the sense that while Bruce’s grief is not gone, it’s moving to a point where he can at least deal with it. Tomasi has moved him through the five stages of grief and perfectly captured the moment of acceptance. Luckily, we’re able to witness it.

Patrick Gleason also aids this transition. While the comic provides some pretty dynamic illustrations in the more action-heavy scenes, it’s the emotionally heavy moments that shine. Gleason utilizes facial features well to communicate the shift in character morale, and the moment of catharsis between Bruce and Alfred is a thing of beauty. This is due to John Kalisz, who delivers the tone through his subdued-yet-powerful colors. Both men work together well, but this issue only further highlights their symmetry and the way they can deliver a powerful message without any words being said.

After months of watching Bruce spiral, it’s nice to see him finally coming out of his darkness. While the story will take step back in the coming weeks, I’m curious to see what Tomasi plans to do in the wake of Bruce’s newfound relief. Given what we’ve seen so far, my guess is that the future will be just as impressive and just as gripping, even without Damian Wayne. 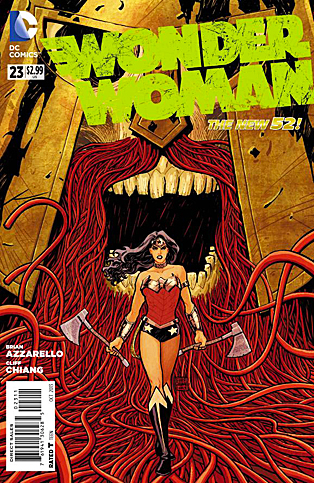 I’ve only just recently completed my attempt to catch up on Brian Azzarello’s Wonder Woman. I had heard good things about the series from people who are and are not fans of the character, and given Azzarello’s track record, I felt that I had a good chance of walking away satisfied. Plus, with the series kicked back to #1 after DC’s reboot, I was freed of extensive continuity and the mediocrity that had plagued the character for so long.

What I noticed first is that Azzarello steeps Diana’s origin in the world of Roman mythology. I love mythology. I love the parallels between the Roman and Greek gods and their modern-day counterparts, so I felt right at home with the series. But beyond this, I found Azzarello’s Wonder Woman to be a story of heroism, identity and intense action.

This issue wraps up a long-running arc involving the first child of Zeus and his endeavor to take his place as the rightful heir of Olympus. But this child, namelessly dubbed “First Born,” is anything but regal and royal. He’s a heartless killer, and Diana finds herself with the task of bringing him down.

Azzarello mixes action and dialogue with aplomb. The background the characters provide in their speech adds depth to the story, all while keeping the pacing tight and engaging. The fights are gruesome and bloody, and Azzarello doesn’t hold back on the violence.

Nor does he spare characters from their fate. I was surprised at the body count by the end of the issue. I was hard to say goodbye to certain long-term characters, but I enjoyed seeing the growth in others who started out as less-than-reputable members of the Amazonian community. While the main conflict – involving a kidnapped baby – has not been solved, the epic climax of the issue is a nice segue into DC’s “Villains Month.”

Plus, Cliff Chiang’s coarse, angular style is a perfect complement to the story. Diana looks imposing in every panel, even those in which she takes a beating. First Born is monstrous, and when he throws down with his mythical adversaries, each panel is clear and detailed. This is also due to Matt Wilson’s tonally-apropos colorization. Diana is both beautiful and strong; First Born is monstrous and terrifying. Each image works well within the confines of the tale. Also, the chaos of the fight is offset by the peacefulness conveyed in the final moments.

I’m glad I got on board with Wonder Woman. If you’re looking for another book to add to your monthly pull list, this is one I’d recommend. It’s a mythological playground, has excellent characterization and is a wholly engaging story. If you were never interested in Wonder Woman, now is the perfect time to come aboard. I think you’ll be pleasantly surprised by what you experience. 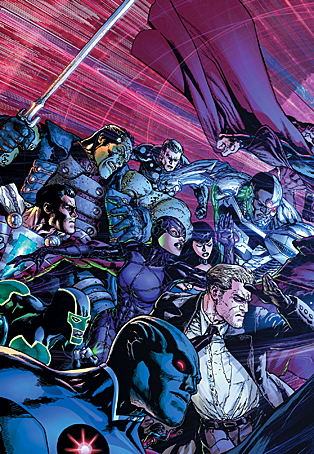 Bannen’s Book of the Week: DC’s “Trinity War” has turned out to be one of the surprise hits of the summer. I had little faith in this crossover having any staying power, but each issue in the series has been better than the last and has provided an interesting concept well beyond what I originally assumed (which was that “Trinity War” was DC’s answer to Marvel’s “Civil War”). This penultimate issue is every bit as awesome, from its impressive storytelling to its even more impressive art. Justice League Dark #23 is the perfect segue into what will be the last stand of DC’s greatest heroes.

Because this issue of “Trinity War” takes place in Justice League Dark, the story’s focus on magic fits nicely with Jeff Lemire’s writing. Lemire gets to play with his magical characters, but more than that, he writes some pretty epic confrontations between the heroes of the DC universe. Shazam’s transformation in this issue is pretty shocking, if not unexpected. The ways the characters interact with each other under the influence of Pandora’s Box is harrowing, particularly when we see how violent they get.

And this leads to the major action of the comic. Each page is loaded with awesome throw-downs between the major heavy weights, and Lemire definitely knows how to write to each character’s strength. Zatanna, specifically, shines in this issue both for her virtuousness and her abilities. Watching her deconstruct members of each Justice League is pretty impressive, and it shows her to be more than a backwards-talking magician.

But the real star of the issue is Mikel Janin. Each image is drawn with impeccable clarity and detail. From Superman’s sickened face, to Batman’s grimness, to Shazam’s might, every panel is layered in polished designs and smooth art. The panel construction is also a sight to behold, as Janin creates some pretty impressive and original transitions between moments – particularly the action sequences. Additionally, Jeremy Cox provides wonderful colors that bring the images to life. I can’t praise the artistic team enough; they truly do an outstanding job in this issue.

Justice League Dark is a good series, but Jeff Lemire really hits it out of the park this time. I defy you not to be impressed by what you see and read. While we know that the heroes end up losing, we can at least be entertained by the road to their demise. If this is any indication of what we can expect from DC’s “Villains Month,” I think comic fans are in for a treat.

If not, at least we’ll have more Justice League Dark to look forward to.