“Night of the Owls” was, by all accounts, a smashing success for DC. Writer Scott Snyder introduced readers to a richer history of Gotham and made foes that were as powerful as, if not more powerful than, Batman. So why try and muddle it up by taking one of the trained owl assassins and giving him his own comic?

Because it’s awesome, that’s why.

While Scott Snyder helped plot Talon #0, James Tynion IV takes on the writing duties, delivering a tight, well-written story that gives the character of Calvin Rose an excellent backstory, as well as a great setup for a future series. 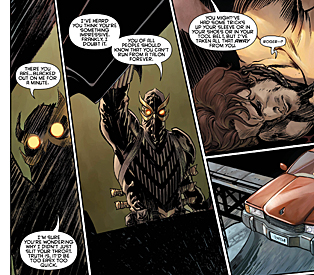 Calvin Rose is a former Talon assassin. While Snyder kept the details of the Owls cryptic (for the most part), Tynion delves deep into their cruel and calculating nature. The dehumanization with which they operate is on full display. It’s evident by the end of the book why they would choose to create their own race of assassins, because Calvin Rose, while still a Talon, is not a monster.

Tynion’s story is neatly plotted as well, so that even if we’re never given another issue of Talon, this one has strong enough characterization and a tidy beginning, middle and end. And I think after reading this comic, fans will want to see more of Calvin Rose.

Guillem March draws the issue, and his work is superb. There’s a level of detail to every panel, and even though many of the pages are cluttered with images (some of which are overlapping), the visuals never lose their focus. March knows how to make the art look gritty but then pull back and smooth it out. One panel in particular highlights the horror Rose feels when he sees the target he has to murder. Despite the mask on his face, his feelings are clear and his look of shock is perfectly drawn.

Making a spin-off from any series is difficult, and making a good spin-off seems like a near impossibility most times. Scott Snyder and James Tynion, however, have made it work. Tynion is a great choice to begin this series, and I cannot praise Guillem March’s art enough. Due to his skill, the comic is truly beautiful to look at.

My only hope is that Tynion can make a series out of this. It would be a shame to see Calvin Rose brought to life, only to never be given an opportunity to shine – especially in the hands of a great writer and a great artist. 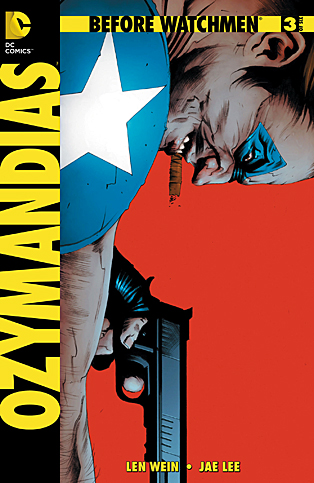 I liked the first two issues of Ozymandias, but issue number three is by far the best. Wein gives readers a knock-down, drag-out between the Comedian and Adrian Veidt, and while everyone knows Ozymandias is the world’s smartest man, everyone also knows the Comedian is the one man who doesn’t care.

Wein’s ability to capture Adrian’s voice is impressive, but his ability to show the reckless and confident Comedian is even better. The fight takes precedence over the arc of the story. Some readers were unhappy with the plot being stalled in this issue, but I found the tactic great for characterization, especially when Adrian and Edward Blake meet again later in the book.

There are also a few nods to the original series, but for the most part this book is about the opposing forces Adrian would seek to defeat later in life. Furthermore, we’re given an insight into the first time Adrian met Dr. Manhattan. The exchange doesn’t quite play out as it is referenced in Watchmen, but Adrian’s reactions to the “American God” are unexpected. The final pages take on a menacing tone, and here we can see the beginnings of Adrian’s master plan, even if we already know how it will happen.

The mood and tone of the book are executed perfectly by Jae Lee. The action sequences are clear and fluid, and Lee’s attention to detail, specifically the shadowing of his characters, makes the art the best part of the book. Lee’s characters still tend to look spindly, but the art is almost restrained, if highly stylized.

I enjoyed every page of this comic. For a series that I had very little interest in, Ozymandias has become a book that I now look forward to reading. I’m not sure what else Wein can give readers, since we know Adrian’s story, but this doesn’t make the ride any less fun.

Plus, with a book this gorgeous, I think the talent should be given some leeway. 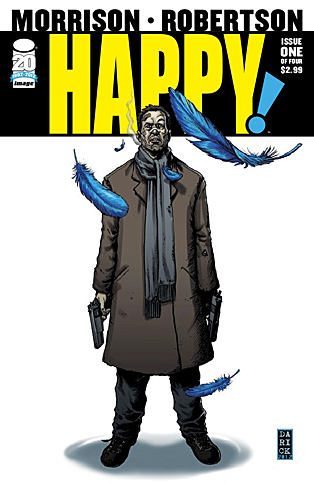 Bannen’s Book of the Week: In the pantheon of great comic writers, Grant Morrison is probably in the top five. Known for his erudite writing and boundless creativity, Morrison has been involved with every major comic publisher and character one can think of. He’s at his best, however, when he’s creatively in the driver’s seat. Happy! allows Morrison this opportunity. It’s the kind of book that showcases Morrison at his eclectic and brutal best, using the gritty stylings of The Boys artist Darick Robertson to accentuate a story that is violent, humorous, odd as all hell and all in all fantastic.

For Morrison, the plot is pretty straightforward and rather simple. After a graphic shootout, a hardened hitman named Nick Sax wakes up in the hospital to a small, blue, talking and flying unicorn.

I kid you not.

The shift from the opening to the final moments of the book couldn’t be more divided. Where Morrison starts the comic by dropping some hefty swears in the fourth panel, the strange and cartoonish nature of Happy’s existence makes for a dichotomy of tone and style. The book still has the Morrison loftiness, but the story is less ethereal and more earthly. I have to admit, however, that I wasn’t fully surprised to see a man dressed like an insect receiving sexual favors from a prostitute dressed like an angel. If anything, I’ve seen odder moments in a Morrison book.

Plotwise, the story clips along at a quick pace, and the setup for the rest of the series is pretty interesting. Not only will we get to see just what role Happy plays, but the premise of the book is strong enough on its own. There are layers of detail involving corrupt police, a contract on Nick’s life and a mysterious figure pulling all the strings. The addition of a flying magical creature is only an added bonus.

Artist Darick Robertson needs to be commended as well for his strong and engaging visuals. Robertson pours on the violence when he has to, but the book is tame compared to some of the situations Robertson has had to illustrate for Garth Ennis in The Boys. In fact, Robertson’s art is cleaner than usual, and the character finishes make the imagery look polished and glossy.

I was pretty sure I’d like this comic before I even opened it, and that’s due to Morrison’s street cred. But I was even more surprised to find a story that will keep readers interested, while still having enough of an unconventional twist to make it even more unique.

Regardless, I’m sold on Happy! and you should be, too.