The Astro A50 wireless headset is Astro’s centerpiece in their small arsenal of gaming headsets. The newest in a long line, the A50 offers among the highest forms of audio serenity available. I have to agree with Astro: they’ll take you for ride, at a price. (At twice the cost of the console they’re designed for, it’s an expensive ride but possibly one worth the risk.)

The A50 features a base station pumping out Dolby Digital 7.1, capable of producing high-level sound (all powered by KleerNet’s clear 5.8Ghz balance of highs, mids, and lows). I found Astros to be a bit more bass-heavy and warmer than competitors’ sets, but not overwhelming enough to be distracting, like, say, those god-awful Beats headphones. The A50s also feature three integrated presets ranging from an overall boost of said mids, highs, and lows made for movies and general gaming as well as an MLG style preset perfect for first-person shooters and heavy competitive gaming.

With the A50 Astro integrated their MixAmp Pro technology into the right side ear cup in button form, making it easy to either adjust your chat levels or game levels on the fly, a well thought-out and seamless addition. Even more seamless is the A50’s new take on gaming chat, with a redesigned boom mic that auto-turns on or mutes when rotated down or up, respectively. Though the mic fixture is non-removable, I applaud Astro for such an intelligent idea on a simple but important feature. I was shocked at how loud the A50s could go without breakup (and they do get loud), making sure you hear every piece of disintegrating cover, crowd reaction, or bout of wind you may discover exploring a valley.

The A50 is powered by a rechargeable lithium-ion polymer battery that charges through a USB connection while the provided stand smartly decorates your digs (which incidentally will house the set’s transmitter as well). All together a very clean-looking package when not in use; bravo to Astro for that. The wireless base station also offers an auxiliary out port as well as digital in and out ports, so feel free to plug 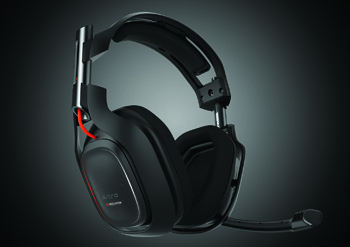 in your iPod and other accessories while killing baddies.

As for performance time, the A50 lasts about eight to 10 hours, with a full recharge time from dead to full of about four hours. The construction itself is quite striking, a careful blend of plastic and metal; it is one solid piece of equipment. This mix of materials works well and offers a high level of build quality with little to no irritating creaks or rattles. On the negative, the unit’s extra bulk leads to the headset being on the heavy side, which was a bit distracting as I kept having to readjust how they sat on my head – leaning too far forward or back caused the headset to shift, though that may be a matter of head size. The ear cups are also a little oversized compared to other headphones on the market though the fitting around the ear seals in sound quite well. They’re also very comfortable, with a heavier fleecy fabric surrounding the ear cups creating a closed back. At higher volumes these will block out all sounds around you, so you’ve been warned. The only little design gripe I have is the preset sound selection should have been a button rather than a creaky slider, but this is unnoticeable once set.

One serious concern I found was intermittent fallout or hiccups in sound, likely due to a software issue, but nonetheless very distracting. Now you may not walk around your house during cutscenes, but I felt the signal strength could have been a bit stronger, so getting up for a beer may not be in your best interests. Astro should be aware of the problem, and is hopefully working on a fix.

At $299, the A50 is very nice set that carries a pretty hefty price tag. For the MSRP it would be nice to see this set packing some extra features like Bluetooth, or possibly a dual band Wi-Fi frequency to cut out signal interruptions. That said, I don’t see these being used by your average gamer – I’d only consider a purchase for the hardcore online gamers out there. Still, Astro has thrown its hat into the ring and really delivered on the A50s. I like ‘em.

Dysfunctional Systems is about bringing order to the world

Snake Oil: The Only Party Game You’ll Ever Need