I don’t really know what I mean by that, but it’s true nonetheless. Chances are I mean it is a mash-up of things from the ’80s that I didn’t discover until the ’90s, and things from the ’00s that my memory has miscategorized as being from the ’90s. Maybe that’s all the ’90s ever was to me – a limbo decade that was over for me before it started.

I was born in 1986; I was 14 when the ’90s ended. For me, the ’90s was that time in my life when I was too young to be a teenager but old enough to wish I could be a teenager already. I was old enough to remember what the ’90s were like, but I wasn’t old enough to now legitimately say that I can remember experiencing any quintessentially ’90s thing while it was new. I probably didn’t even listen to a Nirvana song until 2004. 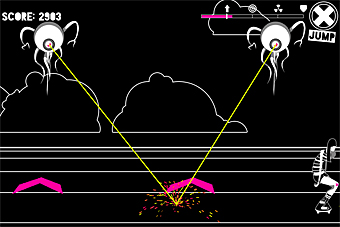 Cool Pizza is a flood of nostalgia for things I know but never actually experienced. The game plays like Space Harrier (a game I saw in arcades while growing up all the time, but which I never actually played until I found a machine inside Shenmue 2 in 2003). You play a lanky, punkish skater girl who zooms forward on her skateboard (she reminds me of my just-older-than-me cousins who lived on the coast, owned a Sega Mega Drive, and always did what Nintendidn’t). As she skates along, all kinds of weird enemies attack, from grinning flies, laser-shooting tentacle-eyeballs, dismembered hands with giant grins in their palms and rainbow-spewing pyramids (they remind me of the rub-on tattoos that would come with bags of lollies at the local skating rink). To fight, the girl has to launch into the air on ramps where her skateboard shifts to her hands and becomes a powerful, button-mashing weapon.

It’s simple but captivating. All you have to do is tilt side-to-side to dodge attacks and connect with ramps, and tap frantically to bash the monsters once you are airborne. A simple combo system makes things more interesting, upping the points the more enemies you take out before hitting the ground, and upgrade items add just enough strategy.

But Cool Pizza is all about style. Every bizarrely demonic, rub-on-tattoo-quality enemy is as cool as the pizza the skater girl seeks. The black and white is only ever punctuated by occasional neon pinks and greens (they remind me of the fluoro markers that all the kids wanted back in school). The midi pseudo-electric-guitar sounds like it is ripped right from a crass MTV cartoon I was probably never allowed to watch.

It’s almost a sad nostalgia. The overall tone of the game floods me with memories, but memories of standing to the side, not of engaging. Old enough to remember, too young to participate, Cool Pizza feels like an ode to a decade I never knew. A decade that finished just as I was old enough to embrace it. A decade that, let’s face it, was in reality probably absolutely nothing like how I remember it at all.

That’s what makes Cool Pizza’s abrupt, unexpected ending somewhat appropriate. After several hours of chasing my own high scores – and long before I was ready to stop playing – I killed one last pyramid and there were no more enemies. “Thank you for playing!” the screen said, and that was that. But I wasn’t ready! I wanted more! I had just been absorbed into this game and I wanted it to go on forever.

In reality, the ’90s were probably absolutely nothing like how I remember them. Anyone older than me reading this will probably scoff at my romanticized yearnings that, really, were probably just a typical kid’s yearning to be a teenager already. Maybe Cool Pizza’s style is nothing like the ’90s at all. Maybe the nostalgic connections my mind instantly made make no sense whatsoever. Yet, they undeniably have at least two things in common: both engrossed and mesmerized me, and both came to an abrupt end just as I was ready to really start appreciating them.