2001: A Space Odyssey and Alien are two disparate depictions of humanity’s first encounter with an alien species. One film is about evolution and expansion of consciousness in the infinite. The other is a film about survival in the vacuum of outer space. Both are considered science fiction classics and were adapted into comics by some of the greatest talents to grace the comic art form. 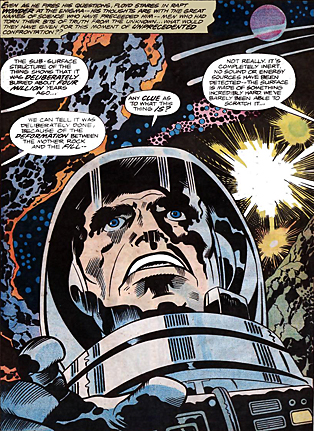 In 1976, Jack Kirby – with color assistance by Marie Severin – translated 2001 into a treasury-sized comic book that celebrated the vastness of all we, as a species, did not know and humanity’s unlimited potential. Stanley Kubrick’s 2001: A Space Odyssey ran 142 minutes. Kirby had to take that story and put forth his own vision of it within the space of a comic book page. His solution to show the scope of the story’s vision was to use several splash pages and double-page splashes. He also kept the number of panels on each page to a minimum and packed story and detail into said panels.

Kirby’s translation of 2001’s scope is what’s important here. He worked from the finished film, the screenplay, the novel and an earlier draft of the screenplay in order to make his 2001: A Space Odyssey a unique vision. A comic book and a film, while both being visual art, are different animals.

Filmmakers and comic book artists create a fiction that fools our perceptions. However, there are aspects of the two mediums that make them unique. Movies have set running times, whereas the reader controls the pace at which he or she consumes the comic. Of course, comic artists guide readers with their layouts, but ultimately, it’s up to the reader how long it takes to read a comic. Films have an audible soundtrack. Sometimes an actor’s inflection, like Hal’s monotone voice, or music, like Richard Strauss’ Also sprach Zarathustra, unite with the image on screen to add extra depth to the piece. Comics rely on art, lettering and usually color to tell a story.

Writer Archie Goodwin, artist Walt Simonson (who worked on the color, too) and colorists Louise Simonson, Deborah Pedlar, Polly Law and Bob LeRose adapted Ridley Scott’s rigidly-framed Alien and translated all of its claustrophobia, intensity and horror. They had the task of adapting a 117-minute movie into a comic. 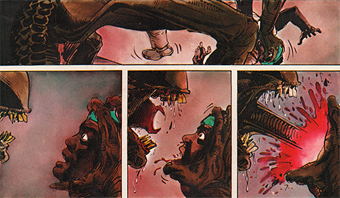 While Kirby tries to fit the whole of human evolution into one single comic book, Simonson goes for a more intimate portrait in Alien. Simonson’s panel design in the comic is claustrophobic, providing a stark contrast to Kirby’s wide-open panel design in 2001. Every panel feels like it’s closing in. Simonson uses very few splash pages to tell the tale. When inside the Nostromo, everything feels cramped – the crew is living on top of each other. As the story progresses, the panels constrict, putting pressure on the characters. Like the film Goodwin and Simonson are adapting, Alien: The Illustrated Story is an exploration of survival in an isolated and cramped environment. The fear is palpable in every panel.

While we have plenty of amazing comic books these days, the pendulum seems to have swung the other way and filmmakers are adapting comic books to film. Some, like American Splendor, The Dark Knight and The Avengers, are successful – others are not. The “official adaptation” seems to have gone by the wayside. The days of artists like Jack Kirby and Walt Simonson tackling the challenge of adapting a masterpiece and succeeding so perfectly are gone for now. Perhaps one day, we’ll see them again.

The World’s What You Make It