The crossover that we never thought would occur reaches its final chapter, and Bendis delivers on what is probably one of the most fun team-ups in superhero history. It’s not a perfect comic, but it’s a pretty damn good one.

I’ll get this out of the way: having the villain pull a classic villain mistake nearly ruined the comic for me. Mysterio hatches the best plan and pulls off the best trick, trapping Peter Parker in an alternate universe. But his ego proves too big and he has to go see how much havoc his plan has wreaked. The heroes, however, are waiting for him, and he’s dispatched without much work. 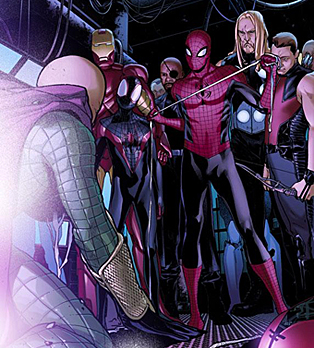 What does work well, however, are the final moments between Peter Parker and Miles Morales. It’s easy to imagine Peter being given an opportunity to share his wisdom, because he’s had a lot of heartaches, and he obviously wants to prevent them in his counterpart. The results are pretty funny, as Peter tries to dispense all of his accumulated knowledge in a matter of seconds.

As for the art, someone needs to give Sara Pichelli an award for her work on this comic. Her character designs are flawless and clarity abounds in each panel. Plus, Justin Ponsor’s colors are phenomenal. I really don’t think I’ve seen a better looking Spider-Man comic (although Stefano Caselli’s work comes very close).

I enjoyed the hell out of this series. It was a crossover I never expected, about which I was very skeptical, and one that, in the end, was more fun than I could have ever imagined. The corny question marks at the end leave the story open for additional tales, but after what he delivered, I don’t think Bendis will return to this any time soon. For now, we’ll have to read about these characters separately. If anyone doubted Peter and Miles would work together well in their own series, I think Bendis and Co. have put that uncertainty to rest. 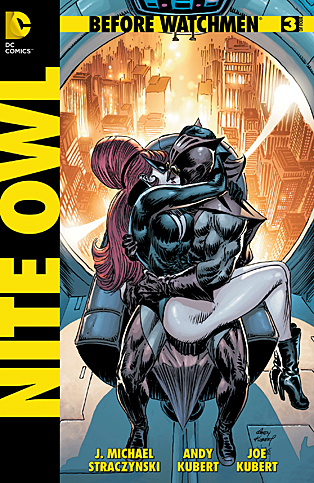 Now one issue before its conclusion, Before Watchmen: Nite Owl still hasn’t come close to being a story about Nite Owl. There’s a sense of writer J. Michael Straczynski trying to do something revelatory about the characters, but the dual plots and awkward pacing make the comic feel more restless than ever.

While the Twilight Lady was a marginal addition in the original Watchmen, Straczynski seems intent on exploring her connection to Dan Dreiberg. Her purpose, however, serves no greater role in Dan’s coming of age. She may take his virginity, but she doesn’t give him any more sense of himself as a hero. She acts like Michelle Pfeiffer’s Catwoman – flirting with the hero while throwing around a volley of sexual innuendos.

Straczynski also splits the comic into a story about Rorschach and a deranged preacher. Why? Not sure. I don’t see how it influences Walter Kovacs in the least. If anything, it seems like JMS is trying to rewrite Rorschach’s reason for being as a foil to the fervent religious sentiment of evangelical Christianity.

While the story still lacks in engagement, I found the art much more enjoyable in this issue. Andy Kubert’s pencil work isn’t as erratic, and the full-page montage between Nite Owl and Twilight Lady is actually well done, even if the scene is graphic and tedious. Kubert also plays with tighter shots, making for some good suspense work. Ultimately, however, it can’t save the story, which continues to meander along without a clear sense of purpose.

Before Watchmen: Nite Owl continues to be a weird cousin to the other Before Watchmen comics. Plus, for a comic that is supposed to be about Nite Owl, Straczynski seems intent on putting as much of Rorschach’s background in there as possible. It makes the comic uneven and shortchanges both ends of the story. The most interesting part – the mysterious revelation by the first Nite Owl – is attached like a footnote and feels out of place. But then again, everything about this story feels out of place, and we’re no closer to understanding the deeper meaning or the impetus for this series. 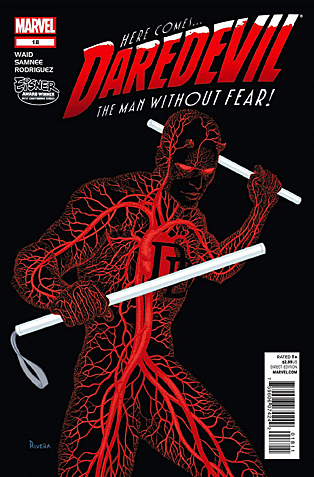 Bannen’s Book of the Week: A lot of weird things have been happening in Matt Murdock’s life. First, his father’s bones appear in his desk, and then he is fired from his job. Now? People who aren’t supposed to be showing up in his life are, and the world seems like it’s teetering on the edge of some great insanity. The problem is that we don’t know if Daredevil is truly being set up (and if so, who’s behind it), or if he has snapped.

Writer Mark Waid is still a master at pacing his story to build the best tension. When an old friend of Matt’s turns up in his house, Matt goes back to Foggy for advice. The results don’t help us figure out what exactly is going on with Matt, and in the end we only have more questions than answers.

Additionally, Waid is good at making Matt and Foggy’s relationship the crux of the issue, even as Matt’s dealing with a romantic relationship and a violent mafia. Matt and Foggy’s conversations are reminiscent of a couple who have just broken up. Waid plays with this type of connection, making the safest person in Matt’s world the one person to whom he can’t turn for help. There’s a sense of desolation at the end of the issue, and it seems that someone is trying to push Matt and Foggy apart. While we’re no closer to getting that answer, it’s becoming clearer with each issue.

Paola Rivera delivers on another beautiful cover, and Chris Samnee illustrates some stellar emotional moments. He captures facial features perfectly, delivering the right amounts of frustration, fear and anger on every page. Javier Rodriguez adds the perfect darkness to DD’s costume, giving him a stealth-like sheen, even in his most action-heavy moments.

With nothing being given away in the story, the tension is only getting stronger with each issue. I’m now desperate to learn exactly what’s going on. Given the tone of the arc, I doubt the ending will be neat, nor will it solve the extensive problems that Matt is currently encountering. But it makes for a fantastic read and a reason to keep coming back every month.