The first time I died in Nicholas Rapp’s Bitless (of the many, many times that I died) the screen flashed grey with this single word across it. The next time I died, the game laughed at me: HA HA HA. The next time, it reprimanded me: WEAK. Someone, something, was getting pleasure out of my failures – savoring it. And I can’t help but feel that that “someone” is the developer himself. 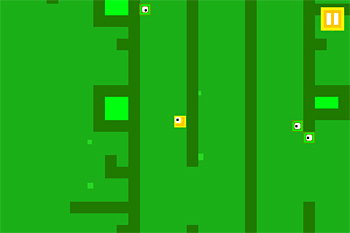 Bitless is a hybrid of single-tap endless runners and Super Meat Boy-esque masochistic platforming. Your little eyeball-cube character slides forward automatically, while tapping or pressing will cause it to jump various heights. Stopping is impossible, and turning is inevitable whenever you hit a wall. What makes Bitless different is the inclusion of wall-jumping. Jump into a wall, and you will stick for half a second, giving you the chance to jump higher back in the opposite direction before you begin to slide down.

The wall-jumping allows for an impressive amount of flexibility to the conventionally minimal controls. Getting through Bitless’s ruthless levels is an act of plotting out the perfect path before your avatar gets to it, knowing exactly where to jump and how high so as not to helplessly slide off an edge or jump over a wall. It’s as though Meat Boy were a lemming, capable of great aerial acrobatics but unable to just stop moving forward.

Much like Super Meat Boy, death comes often and quickly, and a single stage might take dozens of lives to get just right between plotting out the correct path and timing jumps.

But it is those words that get to me. That quickest of flashes on a gray screen and a condescending remark before my next attempt; that omniscient but unseen character taking just that half a second each death to mock me. OUCH.

It makes Bitless perhaps just a bit more earnest than Super Meat Boy. Both games are brutal masters, teaching the player through tight mechanics and punishing failure over and over again. If you fail, you know exactly why you failed. 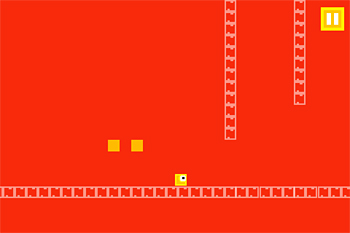 It’s hardly a surprise that the developers of these games take great pleasure out of their players’ frustration. In Indie Game: The Movie, Super Meat Boy designer Edmund McMillen cackles at the plight of players in YouTube reaction videos. Players get so close, then fail, then curse the game’s absent developer. He watches and laughs. Not just because the players are frustrated, but because they are the right kind of frustrated – the kind that makes them determined to keep playing his game. It’s a good kind of frustrated.

And Bitless’s developer loves it. I don’t know him, but I assure you he loves it. It’s written right there into the game. It openly mocks me; it takes pleasure in my deaths. But I keep coming back for more, just like he knows I will.

It’s a weird kind of inverted voyeurism on the part of the player – a masochism, perhaps. That feeling that someone is watching you just to see you fail, and proceeding to fail anyway. Really, in practically all videogames, the developer performs this antagonistic role, setting up a scenario so that the player fails a certain way if they disobey. It’s a weird kind of slave/master relationship where the player is the slave. Bitless is just a little more open about it.

As you slide through the levels, dying over and over, the only enemies you confront besides endless chasms and your own stupidity are other eyeball-cubes, just like yourself. Their little pixel-eyes roll around, following you across the screen. The game is watching you. The game is judging you. The game demands you put on a show for it. “Dance, slave,” it may as well say. The game savors every petty attempt you make to not fail. And you love it.