Early one July morning in the summer of 2008, firefighters were called out to a spectacular blaze in the sleepy seaside town of Weston-super-Mare. The historical wooden pavilion of the Grand Pier, home to one of Britain’s most iconic arcades, was reduced to ashes and heat-warped metal in a matter of hours; at the height of the fire, warnings were issued of exploding games machines erupting in sprays of semi-molten shrapnel and, in the following days, as the people of Weston-super-Mare faced a future without their highest-profile tourist attraction – gleaming coins began to wash up on the muddy sands. 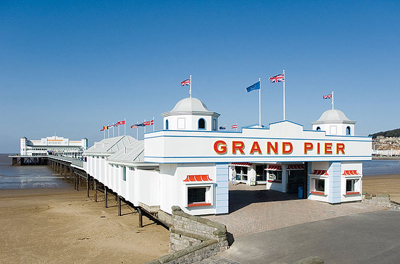 As a child obsessed with videogames, I spent my summer holidays in search of arcades to feed with stacks of silver ten-pence pieces. The Grand Pier – only a short train ride from my grandparents’ house – was an attainable nirvana, a shrine worthy of yearly pilgrimage. It became ritual; each summer my Nanna, Granddad and I took the same bus, the same train, ate at the same fish and chip shop with the brown vinyl benches, then dodged rainclouds as we left the muddy sands behind and fled for the shelter of the pavilion. I clutched my pocket money tight, in case an errant coin slipped from my fingers and through the gaping cracks between the boards, where waves crashed against metal pilings 60 feet below.

Within the pavilion was everything my heart desired: the chink of coins, ringing bells and flashing lights, orb-topped joysticks and coin-pushers as far as the eye could see. A labyrinth of recursive nooks and crannies, it held an astounding wealth of arcade history, from the high-profile cabinets of Killer Instinct and Virtua Fighter to the ingenious placement of Prop Cycle and Hang Pilot cabinets facing the open seaward doors to catch the full force of the wind, to the massive four-player X-Men brawler to the rows of nondescript cabinets where Street Fighter, Bubble Bobble, Space Invaders and uncountable iterations of Pac-Man played their demo reels in an unending loop. 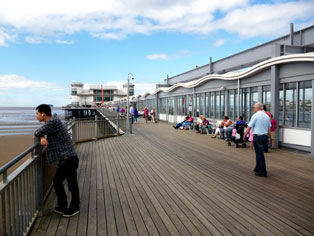 Once my pocket money was spent, I’d linger just a little longer, gleaning what little pleasure I could from watching the local kids play, marveling at their mastery and knowledge of games played every weekend instead of merely once a year. At last, dejected, I’d slink back outside to where Granddad sat on a bench, enjoying an ice cream as he watched the cloud shadows pass over the waters of the estuary. He’d laugh and ask if I’d enjoyed myself, then press a couple of pound coins from his pocket into my hand with a wink and watch me run off, back into the wonderland of clashing soundtracks and spewing ticket machines.

Looking back, these were some of the happiest days of my childhood. I never thought much about Weston after my grandparents passed away; with the loss of my companions on those yearly trips, the ritual was broken. As the age of the arcade wound down there seemed less and less reason to make the trip, until at last an unexplained fire brought harsh reality to the metaphorical death of the arcade.

I watched the news as the Grand Pier was devoured, and while the correspondents wondered at the destruction and bemoaned the loss to the tourist trade, all I could think of was the bench where my grandparents sat in the sunshine and a wealth of irreplaceable wooden cabinets lost to the flames.

Weston came to mind even less after that. Without the pier, there was nothing to hang those happy memories on. If I’d gone back before the fire I may have been disconcerted by how things had changed, but some of the touchstones would still exist. Old arcade games would still be hiding in the darkest corners of the pavilion, waiting for someone to look past the bright lights of Dance Dance Revolution and Time Crisis in search of gaming history. No more. 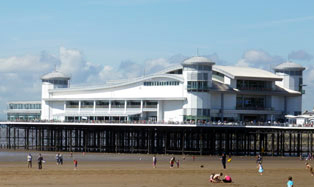 And so years passed before I discovered the pier had been rebuilt, at a cost of almost £40 million, crowned with a new pavilion filled with modern entertainments.

Fifteen years after I’d last set foot on the Grand Pier, I embarked again on the pilgrimage, this time with my wife at my side. I expected to be disoriented after all this time, but I wasn’t quite ready to see so many memories from my childhood subtly altered, decayed and corrupted by the years. A distinctive glass-fronted curve of artisanal shops and art galleries, now overrun with For Rent signs and garish Lebanese late-night takeaways. Newspaper headlines outside corner shops bemoaned the failure of final negotiations to reopen the beloved Tropicana swimming pool, its fake palm trees overhanging the beach. This wasn’t the Weston I remembered, now stripped of both economic wealth and the illusions of childhood. Then, as if to add further weight to my flagging spirit, we discovered the cozy, family-run seaside cafe where my grandparents and I had eaten lunch so many times, now a garish Chicken Inn.

These were the elements of my pilgrimage that hadn’t been destroyed in an inferno and rebuilt from the ground up, so it was with a certain trepidation that I walked the pier with ice cream in hand, watching the waves beneath my feet. Yet as I stood outside the new pavilion, yards from my grandparents’ bench, with the electronic blare of fruit machines and the erratic clack of air hockey pucks ringing in my ears, I knew they’d done something amazing. It wasn’t the shrine I remembered; the concept of the arcade has irrevocably changed since my childhood, no more dominated by stand-up machines with eight-way clicky joysticks and chunky buttons, nor punishingly hard games draining your pockets coin by coin as you struggle for mastery. You pay your money, you take your experience, and two minutes later – three if you’re lucky or talented – you’re ejected back into the dark of the arcade to wander in search of your next fix. 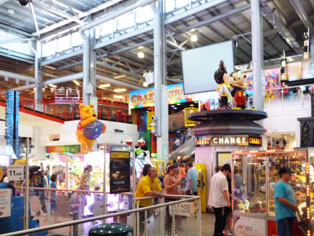 Could they have recreated the old-style arcade I remembered, even if they’d wanted to? Those chipboard cabinets and scanline-ridden cathode ray tubes were never made to last. Those that escape the landfill find themselves in the hands of collectors, to live out their days in sterile preservation. Would anyone of a younger generation even look twice at Street Fighter or Bubble Bobble when lured by the technicolor prospects of Fruit Ninja HD and Terminator Salvation? Would they compare the primitive polygons of Prop Cycle to the 1080p Unreal Engine 3 of their home consoles and laugh?

As I walked into that pavilion, as the lights sparkled, hydraulics clanked, tickets spewed forth and a giant robotic arm whirled exhilarated punters through the air above my head, I realized they’d achieved something more than the mere replication of what had been. This wasn’t my ideal of what an arcade should be, but a new ideal: an arcade for the 21st century. It created a bubble of the familiar arcade experience, surrounded with the trappings of a funfair: ghost trains, fun houses, indoor white-knuckle rides making the most of the tight confines of the new pavilion, while go-karts power-slid round their concealed track amid the rafters.

It may not be what I want from the Grand Pier, but what they’ve built isn’t intended for me. It’s for the kids on pilgrimage stuffed full of fish and chips, spending their pocket money with gleeful enthusiasm and reveling in the experiences bought with each precious coin while their grandparents enjoy a well-earned ice cream on a bench in the sun. Over the past hundred years the Grand Pier’s entertained millions of children, and if its continued evolution is required for me to one day bring my grandkids to enjoy the wonders of Weston-super-Mare, that’s a price I’m willing to pay.

Rob Haines is a writer, podcaster and ex-turtle biologist. You can find his work at Generation Minus One, or follow him on Twitter @rob_haines. Header image of the Grand Pier fire by Chris Borrison.

The Arcade, and What We Stand to Lose Along With It