Most iOS games have a straightforward relationship between the player’s input and the game’s output: pulling a bird-loaded slingshot, flicking a piece of paper, throttling a jetpack. Even Ziggurat’s metonymic sliding the thumb horizontally to adjust vertical elevation still has a one-to-one ratio to its precision where what goes in is what comes out. Dime Studio’s Tasty Fish differs. A specific tap or slide of the finger will not create a perfectly predictable action but instead pass on an order which itself may or may not go as planned.

In Tasty Fish you are placed in charge of a school of fish attempting to live and breed in disproportionately troubling waters. Chomping sharks roam back and forth; opportunistic crabs scamper along the seabed; greedy trawlers drop nets. Each is capable of devouring large chunks of your school, and you must tap different locations on the screen to move the fish (and hopefully keep them out of harm’s way) – at least, as many of them as 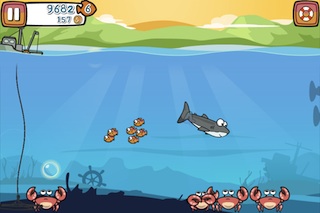 possible. Meanwhile, bubbles float up towards the surface, offering both the chance to collect in-game currency (used for a conventional if well-implemented system of items and upgrades) or, more importantly, to repopulate your school with new fish.

Tasty Fish is not the experience of being a school of fish, but of shepherding a school of fish. You tell them where to go, but each fish is its own entity, following its own course from its own position to an approximation of where you want them to move. The more fish you have alive, the more points you accrue, but the more likely you will lose a chunk of your population. One fish may turn on a wider arc than you anticipate and veer too close to a crab’s pincer, for example, or a shark will appear out of nowhere and eat half your underlings in one mouthful. (Much like any society of animals, there is a stage where the population becomes unsustainable.)

Deaths may be quick, but extinction can be slow and drawn out. Keeping a school of 30 or more fish alive can feel hectic and comical, often eliciting a vocal cry as an unseen net swoops up three-quarters of your fish. Yet nearly every game ends in a fizzle, with one or two lone fish – much easier to control than that swarm of 30, may they rest in peace – frantically darting back and forward against all hope or purpose. Conversely, this is what makes Tasty Fish so fun. By focusing on the weird, impossible shepherding controls, Tasty Fish has created something rather unique for iOS: a game that’s enjoyable because of how tight it isn’t.

(Disclaimer: The author has previously had access to a pre-release test version of Tasty Fish and knows a couple of the developers personally.)