I’m sitting on a tall, uncomfortable wooden stool at the back of a long, rectangular room. My laptop is perched awkwardly on my knees while the stool’s tiny, circular seat is slowly putting my butt to sleep. The whole place smells like very old cigarettes, and the incandescent bulbs hanging from the high, unfinished ceiling are failing to lend any definition to my surroundings.

It’s the middle of the afternoon, and there’s almost no one else here. The handful of other people I spot from my seat near the back of the establishment look more like tourists than patrons, and the lone employee manning the front counter looks bored and restless. A large sack of quarters hangs from his belt, but he hasn’t needed to open it up since before I arrived. 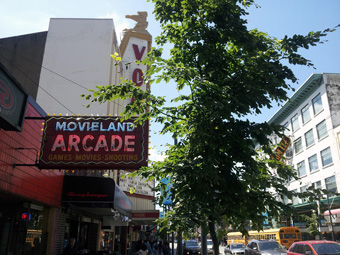 Fortunately, I’m not here for the seating or the smells, the view or the company; I’m here because of what those aforementioned light bulbs are currently failing to adequately illuminate.

Stretched out in front of me are four rows of about a dozen arcade cabinets apiece, all chirping and blinking away in a variety of tones and patterns. Every one of the machines bears the marks of its history, with chipped wood siding, scratched screens and burnt-out coin slots visible on most of the cabinets. This is no boutique arcade full of lovingly restored vintage arcade cabinets – this is the real deal: a seedy arcade, in a seedy area of downtown, that’s been in operation longer than I’ve been alive. Movieland, the old (but still brightly glowing) neon sign above the entrance reads.

Throughout the decade or so since I discovered the joys of coin-op gaming, and the joys of Street Fighter in particular, this place has been a frequent haunt of mine. While it may be mostly empty as I write this, later in the evening things will pick up, and there will be some stiff competition to be found…or so I hope. It used to be that I could show up on any night of the week and find some rival Street Fighter players to face off with, and on weekends there would be as many as a dozen people lined up to take their shot at whoever was currently ruling the Street Fighter III: Third Strike machine. These days, it’s a bit hit or miss, and some nights no serious competitors show up at all.

When the other players do show up, though, the dingy decor of the arcade becomes as irrelevant as the color of the upholstery in a Bugatti Veyron; the action on the screen, and the interaction between characters both on-screen and off, becomes a vacuum that inhales all of your attention.

There’s a unique and beautiful experience that arises in this situation, and I’ve never quite seen it duplicated in any other medium or venue. When a particularly close match is closing in on its conclusion, that bubble of atmosphere that encompasses the arcade cabinet, its users, and its nearby spectators is an electric force that demands that your heart rate increase. The players flash sidelong glances at each other when they have a split second to gather themselves; they watch the sweat bead on each other’s foreheads, and watch for any sign of what their opponent might be plotting. The audience’s eyes are glued to the screen, waiting for the one mistake that results in a victor being decided.

When that victor is decided, if a match is suitably noteworthy, applause and cries of “So sick!” will arise from the people waiting to step up to the plate. Sometimes hands will be shaken, but other times curses will be muttered and control panels will be slapped in frustration. The highs and lows of human emotion can both be observed in the faces and words of complete strangers, all over stakes of just 25 cents. 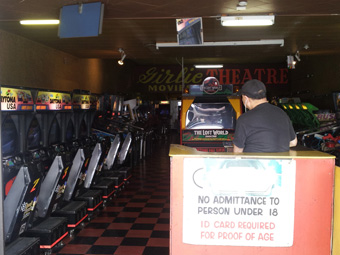 In case I haven’t been clear: this has been one of the greatest and most formative experiences of my life within the realm of videogames. These people are not saints, and these places are not havens – there have been people I disliked and dodgy happenings aplenty along the way. But none of that takes anything away from how incredible and how memorable that experience has been for me in aggregate.

The reason I’m sitting here in the back of this arcade, typing away on my laptop instead of playing some games, is because there’s a sinking feeling in my gut whenever I think too hard about what this place means to me. It occurs to me that I may be among the last generation of people who get to experience this sort of thing in their formative years. When I first started coming here, there were two other arcades within walking distance, and another two or three just a short train ride away. Now, Movieland is the only one left, and its declining patronage forces me to think about how much longer it will survive. I could show up tomorrow and find the doors chained shut. The very thought of it is like a punch in the gut.

This isn’t a call to arms, as I’m not naive enough to think that I can single-handedly convince the world to start playing arcade games again en masse. I guess this is just a reminder of what we stand to lose in the next few years, as home consoles and online multiplayer continue to erode what’s left of coin-op gaming. There will always be arcade machines tucked away in the homes of devout collectors, of course, but those will not serve the same purpose for future gamers as Movieland has served for me. There will be no strangers meeting on those machines, no curious youth wandering in off the street and discovering Street Fighter.

All I can ask is that you keep this in mind next time you pass by an arcade with some free time on your hands. Consider how impermanent that arcade may be, and how short the time remaining to experience them may be growing. It’s easy to see how much more convenient the world of Xboxes and PlayStations is than the world of fridge-sized arcade cabinets, but any seasoned arcade gamer will tell you that the experiences contain therein are hardly comparable.

Head down to your local arcade sometime soon. You may find something of what I found in it, and you may just manage to keep their doors open for a little while longer. If you’re especially fortunate, you may find yourself in the right place at the right time, and will perhaps encounter the aforementioned bubble of electric excitement. If you do, you – like me – will be unable to leave the memory of that feeling behind, even if every arcade on Earth eventually closes its doors. It’s worth a shot, isn’t it?

Mitch Bowman writes about games, technology and music for a variety of fine Internet publications. You can follow him on Twitter at @Niyeaux.

Dying Malls and Their Arcade Dreams