After I finished Dr. Langeskov, The Tiger, and the Terribly Cursed Emerald: A Whirlwind Heist, I replayed Joni Kittaka’s Secrets Agent. Both are short, free games that feature a narrator, though this isn’t in itself unique. Plenty of games have a voice that accompanies the player: Dear Esther, The Stanley Parable (which William Pugh, one of Dr. Langeskov’s creators, worked on), Darkest Dungeon. But I felt like the narrators of these two games shared something unique.

Secrets Agent is a Construct 2 game that sees the player navigating a series of puzzles under the friendly, supportive tutelage of Kittaka, who guides you through a chalk-outlined mansion in pursuit of a stolen gem. There’s a gem in Dr. Langeskov, too, and you navigate around it via the instructions of narration by English comedian Simon Amstell.

Both games feature rich, well-produced audio, and, through their narration, both share a similar human warmth. There’s the feeling of a voice being close in your ear, like you’re seated next to a person who is responding to your actions with genuine emotions—fondness in Secrets Agent’s case, cheerful exasperation in Dr. Langeskov’s. Single player games can be lonely pursuits, and though the voice work is ultimately a set of pre-recorded dialogue tethered to triggers, the emotive voices of both games’ narrators and the way they tend to wander off topic or mumble to themselves made these games feel 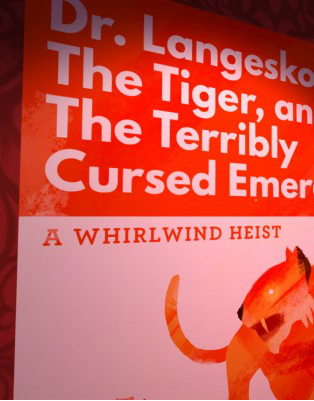 intimate and special, like they were happening in real time just for me.

Dr. Langeskov and Secrets Agent’s narrators both instruct the player, telling them where to stand, which buttons to press, and generally attempting to make sense of what’s going on. I think it’s safe to say that since the big reveal of (editors note: System Shock 2), players have had a hard time trusting these narrators, a fact The Stanley Parable deliciously caters to.

In Stanley, I found something delightful about the way the narrator accounted for almost every possible way I could go off-track. Given its pedigree, in Dr. Langeskov I found myself purposefully bucking the narrator’s commands, certain there were secrets I was missing as I dashed around the caper. Ultimately, it didn’t make much of a difference, and the narrator’s frustration with my dawdling made me feel a little bad, like I was being purposefully uncooperative with someone who had been welcoming enough to trust me to help out in their world.

In Secrets Agent, Kittaka guides you through puzzles it would be impossible to solve on your own. The temptation to buck the system is offset by the general lack of available options to the contrary; though you could certainly screw around if you liked. Dr. Langeskov and Secrets Agent both feature puzzles, but neither is a puzzle game per se. Rather, they’re more akin to trust falls, asking you to put your faith in the developer, or their proxy, submitting yourself to blatant orders instead of the invisible ones you march to through other games’ level design or plot constraints.

The inclination to refuse the narrators’ suggestions, to not trust them, makes me wonder if I see game developers as my enemy, or at least a vaguely antagonistic force. After all, they create the worlds that frustrate and attempt to best me, at least where certain design ethoses are concerned. We criticize games that feel too on-rails, that don’t give us our freedom, while at the same time recognizing that games are at their core carefully crafted experiences with limits. Maybe it’s breaking this illusion of limitlessness that we rebel against, but that seems childish at best. Games like this reveal our conflicting desires to be both leaders and followers, to both help and hinder, and ask me to consider, ultimately, who I want games to allow me to be.

In Secrets Agent I feel welcome, comforted, conspiratorial. In Dr. Langeskov I feel befuddled, well-intentioned and helpful while at the same time suspicious. I want to be a good guest in these game worlds, even as the desire to disobey flickers inside me. This conflict highlights the sinister nature of Bioshock’s “Would you kindly?”—I want to kindly, but maybe I’m not so kind at all. Maybe I don’t expect kindness from games, and, as such, feel unwilling to give it in return, even as Secrets Agent and Dr. Langeskov fall all over themselves to give it to me. Then again, Dr. Langeskov unleashed a tiger on me, so maybe it isn’t so nice either.