“The City calls to me… it cries to me of its need. And as I approach it, antennae twitching in anticipation, I see The City for what it is… a big place with lots of buildings, and lots of rooftops to jump around on. That’s what I do. I’m a superhero. And the city needs me.” 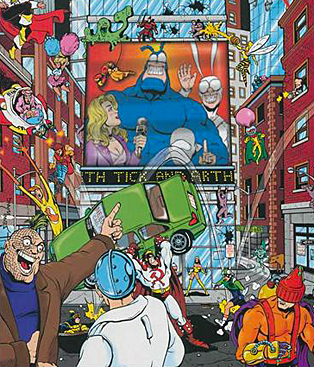 This quote appears on of the second page of The Tick #1. The Tick has just escaped from a mental institution and is leaping from rooftop to rooftop of The City. He feels like he is “the destined protector of this place,” while accidentally destroying ledges and chimneys along the way with his massively dense blue frame.

Other adaptations provide more backstory for our hero – in the cartoon, The Tick wins the right to protect The City in a superhero competition in Reno; in the live-action TV series, he’s protecting a bus station in the middle of nowhere and the owner gives him a free ticket just so he will go away. Regardless of the origin, the result is always the same: The Tick becomes the rooftop-hopping and building-damaging protector of The City.

Despite its generic name, The City actually has a lot of character – literally hundreds of them! Stretched across three entertainment mediums (including a mediocre videogame) the world of The Tick features a bountiful cast of mediocre-to-adequate heroes and villains, including Tick’s sidekick, Arthur (and Little Wooden Boy, temporarily), their best friends Die Fledermaus and American Maid (Batmanuel and Captain Liberty in the live-action show), Sewer Urchin, the Man-Eating Cow and Crusading Chameleon. On the baddie side, there’s Chairface Chippendale and his gang of hilariously-named rogues (including The Guy With Ears Like Little Raisins), suburban preteen villain Brainchild, Mr. Mental and Mynda, Barry Hubris (who also calls himself The Tick), Multiple Santa, Thrakkorzog of dimension 14B, The Deadly Bulb (a.k.a Pigleg), Proto Clown and my favorite – the Evil Midnight Bomber. Amazingly, that doesn’t even scratch the surface of The City’s population. 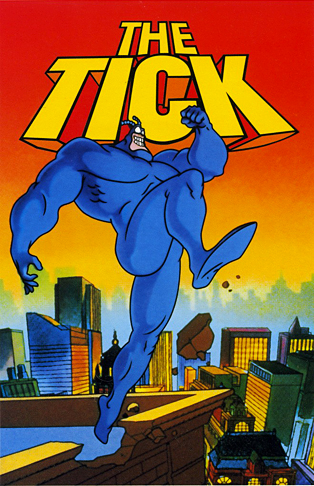 To accommodate so many eccentric people, there are quite a few locales in this vast metropolis and many have seen their share of exciting battles and derring-do.

One of the most infamous battles occurred at Chairface Chippendale’s palatial estate of the outskirts of The City. Our heroes almost succeeded in thwarting Chairface’s plan to write his name on the moon with a massive laser. Almost succeeded, that is, because the villain did manage to write “CHA” before the laser was destroyed. The Tick later partially restored the surface of the moon, so that now it simply reads “HA.”

Another landmark of merry mischief occurred at the site of what was once Ninja World, a late-’80s theme park eyesore that was typical of the ninja-mania popular at the time. In a fit of rage, The Tick demolished it after his lady friend Oedipus was wounded. Thankfully, the ninja pest problem in The City has never been as bad as it was in the late ’80s. As for the rest of the country, that’s another story.

Back in the ’90s, tragedy occurred when popular superhero hangout The Comet Club was almost blown up by an insane supervillain, the Evil Midnight Bomber. Fortunately, only the adjacent shack called the Sidekick Lounge was destroyed, with minimal sidekick injuries. Other favorite superhero hangouts include The Diner – where exterior shots akin to the Edward Hopper painting “Nighthawks” can always be expected – and the Lonely Panda – where the heroes of the live-action show hung out.

Besides the estate of Chairface Chippendale, the Evil Eye Cafe is a hotspot for ne’er-do-wells and no-goodniks. The club has a stylish, retro-cabaret vibe with live entertainment. Featured performer Mr. Mental once hypnotized The Tick into stealing a thinking cap from the local Pendecker Laboratories so that he could conquer The City – or at least cause chaos. After much mind wrestling, which included nightmarish hallucinations of The City buildings turning into monsters and life at a day job, The Tick prevailed once again! 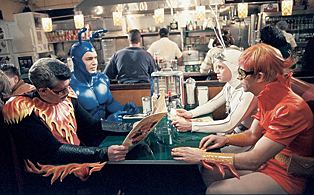 Educational places to visit include The Museum of Industrial Design, featuring the “World’s Most Comfortable Chair,” and Dinosaur Grotto, home of dinosaur fossils and mascot/paleontologist, Dinosaur Neil. Despite the fact that Dinosaur Neil has grown into a very large, mustachioed dinosaur and tried to destroy The City a few times, his crimes have been excused as accidental mutation.

The City is used to giant visitors, so this was not a shock. Other similar visitors include Blowhole, a sperm whale wearing overalls who runs across the continent every few decades, and Omnipotus, a being from outer space who returned The Tick to The City after an intergalactic adventure (he then tried to devour Earth giant chunk by giant chunk). Fortunately, The Tick convinced him to take a bite of the poor graffiti-covered moon instead.

As long as The Weekly World Planet is reporting about the victories of the brave (and sometimes not-so-brave) heroes of The City, you can eat your Drama Flakes and drink your Honesty Cola with your mind at ease. Even though it’s not New York or Metropolis, The City’s still a pretty keen place. The citizens say that whenever things get quiet at night, you are guaranteed to hear The Tick’s brave battle cry of “SPOON!” echoing in the darkness. They really wish he would stop, though, because they’re trying to sleep.

“City, it is I, The Tick, your destined defender. Show me where it hurts!”

A week in the city, Ben Edlund, The City, The Tick