Everything about Saint’s Row: The Third is bombastic. Its look, its sound, its set pieces (“I’ll shoot the window out of the plane…”) It’s a world where game shows mimic the violence of the streets; where driving on the wrong side of the road earns you not nitrous boost, but respect; where Brutes that look more than a little like Left 4 Dead’s tanks occasionally show up and throw you around. And hoo-boy is there casual sexism! But it’s not in service of creating “gritty realism”, an “adult” world. It’s juvenile to the extreme. It positively revels in video game camp, the good and the bad. The more I enjoy it, the more I can’t stop thinking about it.

The gangs are stereotypes, constructed from the material trappings of a culture, ripped from any context and thrown out there as costumes: Asian British cyberpunks (I assumed they were Asian, my bad!), luchadores (whose leader, Killbane, is decidedly not Mexican), Belgian sex ring runners (is that a thing?). So it’s fairer to say the gangs present themselves as stereotypes. Maybe that’s easier for the game designers to program, because street gangs often have an ethnic component exaggerated by both their members and outside observers.

Anyway, the Third Street Saints are multicultural. Your lieutenants are a white woman (Shaundi), a black man (Pierce) and an Asian man (Johnny Gat). Their color is purple, though the entire palette and all the game’s clothing and accessories are available to you. Their emblem is the fleur-de-lis, and making a connection to the permissive attitude of New Orleans isn’t difficult, though it isn’t particularly necessary.

By the way, the Saints in this game have become a super-popular lifestyle brand. They have a chain of stores and Shaundi’s got her own TV show. When the gang arrives in Steelport after having taken over Stillwater (the site of the first two games), your assets are frozen. You crash at Shaundi’s ex’s Apartment (never given a name, he’s just an apartment with legs) for all of two or three missions before you upgrade directly to a penthouse. No slow-burn rags-to-corrupted-riches story here.

I want the game to be satire, to be as smart about its narrative and world as it is about its mechanics, themselves a reference to so many other games. But just as those mechanics are also what they’re making fun of, maybe the game is having its cake and eating it, too. Maybe…

Sometimes it’s hard to give it the benefit of the doubt, because it’s like a concentrated version of its medium, one that has issues with women and with anyone who’s not white and who’s different. But then you look at the character creator, which is robust, to say the least. You can play it straight or create a character for comedic effect. And because what enables comedy also enables transgression, the character creator gives you the tools to undermine pretty much any kind of stereotype in media representation. 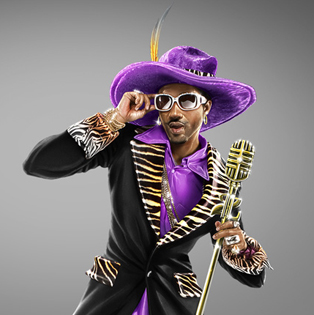 Mostly everyone responds to your character’s actions more than your appearance, your sex, gender or personality. It’s a kind of fantasy that, as a straight white male, I don’t need: to be genderless, sexless, non-”ethnic”. Normative’s my everyday. And so while the Saints may be predominantly straight men who bray and strut and surround themselves with scantily clad women to prove their masculinity, the Boss character isn’t so limited.

Drop $500 at any of the plastic surgery offices around the city and you can change the Boss’s face, body, skin, voice, hair, beard or “sex appeal” (for males, package size; for females, breast size). You can make cheesecake. You can make beefcake. You do choose “male” or “female” (the second game’s gender slider is gone), but you can pick any voice and wear any accessories/clothing no matter what sex you’ve chosen as your default. As far as I can tell, all that choosing “male” or “female” does is determine which bits of your anatomy the sex appeal slider affects and which are pixelated when you’re naked.

Because there’s nudity in this game. You can streak. You’ll be auctioned as a sex slave (with an unsettling jump of time and space during a loading screen that simulates you coming out of a drug blackout). And in this context, right on the main menu, you’ll find “Whored Mode,” a joke about the omnipresence of Horde mode in games post GoW2. It is worth noting that in Saint’s Row you cannot pay a prostitute for sex and then beat her up to take the money back, which seems to be a decidedly more real-world scenario than the forty identically dressed women attacking a tank with rocket launchers and sex toys you will find here.

Maybe it is rationalizing to say this is a game about games and their representations of the world, rather than the world itself. And maybe that doesn’t matter, because as a piece of mass media it’s accessible to so many people and so many interpretations and is so sprawling that it’s impossible for even one player to have a cohesive read on the game. It’s full of contradictions and messes.

The game takes the GTA series as its template, but where, say, GTA4 gets bogged down in its self-important (and often one-note) social commentary and then ultimately absolves the player, Saint’s Row provides no such cop-out. Sure, maybe there’s a critique of capitalism (not so very) buried in the respect/cash system, and yeah, maybe you can read the game as satirizing other games. And while it does allow me, as a player, a breadth of representation of the sex and race and gender of my character, does that offset the fact that the city of Steelport is built as a racist and sexist space?

So I tell myself when I launch missiles into the city from a satellite, killing my enemies but also civilians and myself, that it’s a critique of the sanitized drone attacks of Modern Warfare and not a comedic exploitation of the real thing. And I think that’s why I feel a bit of estrangement from other games as I play this one: it knows what I’m doing, and it’s messing with me for loving it.

Rating: Five out of Five Pies

Brian Taylor thinks the real challenge of Saint’s Row: The Third is explaining it to your friends who don’t play games without coming across like a crazy person @brianmtaylor.