Brian Michael Bendis takes a break from all the action occurring in Spider-Men to reunite Peter Parker with the family that just lost him. The result is an emotional and often funny comic that gives readers a chance to see what would happen if a deceased loved one returned.

I’d be remiss if I didn’t mention a major gripe I have with the comic. The cover shows a battered Peter Parker holding a beaten Miles Morales. This never occurs. The cover is misleading for the type of story Bendis is going to tell, and if readers were expecting a great action-filled story, they’ll be disappointed. 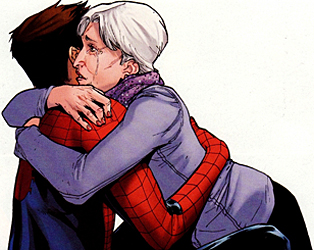 That said, what occurs in the comic is, in a word, cathartic. Most people have loved someone who has died. Imagine getting the opportunity to see that person again. The bulk of this issue is the 616-Universe Peter talking with the Ultimate versions of Gwen Stacy and Aunt May. Readers of both series will sympathize with Gwen’s surprise as she learns that Mary Jane becomes a supermodel, and they’ll also cringe when Peter sidesteps Gwen’s question about her own fate in Peter’s world. Additionally, Aunt May’s emotions are palpable, and given the history Bendis built for her in Ultimate Spider-Man, her seeing Peter alive carries a lot of weight.

Bendis is phenomenal at writing Spider-Man, and I don’t think there’s a single writer who’s better at it. He has emotional beats down to a science, and he utilizes specific moments for greater emotional impact. Of course, artist Sara Pichelli plays her part, too. Pichelli continues her fantastically clean art in this issue, and coupled with Justin Ponsor’s vibrant colorization, the images come alive on the page. Pichelli inks the issue with such care that the characters don’t lose any of their detail, and facial expressions are rendered perfectly.

Aside from the falsity of the cover, Spider-Men #4 is a good comic. Bendis slows down the story by taking a break from the major action to focus on the characters, but it works. I felt for Peter, Gwen and especially May. I hope that Bendis keeps this story alive in Ultimate Spider-Man because I’d love to see the after effects of Peter’s visitation. The series is supposed to wrap up next issue, but I’m curious how Bendis will do it. There still seems to be a lot of story to tell, especially if he wants to give readers the strongest emotional impact. 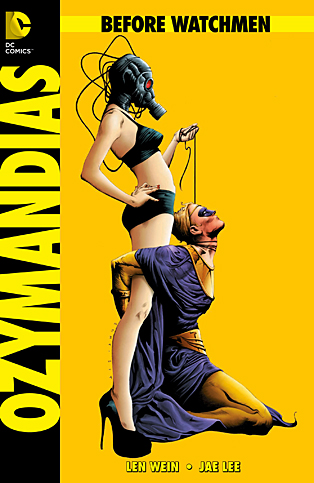 The more I read certain Before Watchmen comics, the more impressed I am. Ozymandias is one of them. Len Wein has been able to convey Adrian Veidt’s coolness and confidence, a task that cannot be easy given the strength of the source material. But issue #2 of Ozymandias is well written, well constructed, and one of the best of the Before Watchmen issues currently on the stands.

The last issue of Ozymandias had Adrian choosing to fight crime because a girl he loved died of an overdose. I wasn’t particularly impressed with that catalyst, but one can see the necessity of it when reading the second issue. It may be a typical chase-down-the-drug-maker story, but Len Wein’s dialogue and narration are natural and fitting. I’m still shocked he was able to get Adrian’s “voice” this well. His pacing is fantastic, and the issue is a smooth read from start to finish. And by the end of this issue, readers can see the connection Adrian has to the Minutemen.

Jae Lee’s art continues to impress. Lee is given more room to flex his muscles in this issue as several of the panels are pencil only, and readers are given an opportunity to see the artist’s ability without any adornments. Panel construction is clever and creative, and Lee crafts a splash page depicting Adrian’s movements as he fights. The fluidity of the imagery is fantastic, and while I’ve never fully liked Lee’s style, his skill is hard to deny.

For two issues now, Len Wein has crafted a pretty good story and Jae Lee has provided some great art. Adrian isn’t the corporate man he appears to be in Watchmen, and what I’m most excited for is to see how Wein incorporates Adrian’s ultimate plan into the series. Given what we’ve seen so far, I have high hopes that he does it right, and readers will be satisfied with how well it plays into Watchmen. 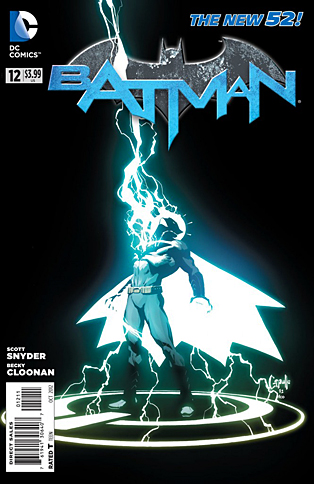 Bannen’s Book of the Week: Standalone issues can be tricky to write. Sometimes, they’re just gaps inserted between arcs, but sometimes these single-issue stories are throwaways. The reader isn’t rewarded for sticking with the comic. With Scott Snyder, however, this is not the case. Issue twelve of Batman does take a break from the action and violence of the “Court of Owls” story, but in its place, Snyder pens a tale that is heartfelt and still relevant to the Batman mythos.

For a Batman comic, Batman is barely in it. Readers are instead introduced to Harper Row, a welder who lives with her brother Cullen in Gotham’s worst area, the Narrows. Through Snyder’s focal point, we learn that Harper is not only handy with a welding torch but also with computers and electrical lines. The role she’ll play in Batman’s future has yet to be revealed, but as an introduction to her character, Harper is fleshed out in terms of her morals as well as her abilities. The brother/sister relationship between Harper and Cullen is the most engaging part of the issue, and when Batman shows up to help them out, I couldn’t help but feel a surge of pride that people who are picked on will have someone look out for them, even if it is only a comic book.

Artist Becky Cloonan (who has done a myriad of work with every major publisher in comics) illustrates the first 21 pages, while Andy Clarke illustrates the final six. Cloonan’s art is cartoonish in the sense that it doesn’t have the photorealism of some other comic artists, but Cloonan’s style works well, and the art of the book is great. Her Batman is imposing and powerful, and Harper and Cullen are rendered well with strong visuals. The art is so strong that when Clarke takes over at the end of the book, the tone changes. Harper loses some of her luster, especially in the final page where her face looks mildly distorted. I wish Cloonan had illustrated the whole of the comic. Hopefully, this isn’t the last we’ve seen of her on Batman.

I feel like a broken record continually praising Scott Snyder, but the guy just does awesome work. He shows that he not only knows how to write Batman, but he knows how to make Batman a secondary character in his own story – and to still keep the story interesting. Becky Cloonan is a great addition in terms of her style and ability to convey emotion in her characters. With both strong writing and strong art, it’s easy to see why this is the book you should be reading this week.