Most of my Hawkeye knowledge is pieced together from a few random appearances he’s had in other books I’ve read, so I went into this issue without any clue of what to expect. I think this helped me appreciate Hawkeye #1 more than I would have if I were a big fan of the character. Why? Because very little of this issue has Hawkeye being Hawkeye. Most of it is centered around Clint Barton, the man behind the mask, and the character nuances expressed by writer Matt Fraction make for a strong introduction to Marvel’s greatest archer. 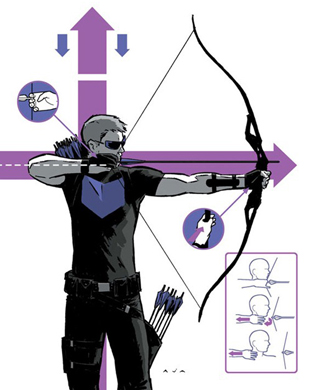 From the intro paragraph on the inside cover, Fraction lets readers know that the series they’re going to read is about Clint Barton when he’s not being an Avenger. So how does he spend his time? He still rights the wrongs of society, but he does it without a costume and this gives the character essential depth that moves him beyond the arena of a sharpshooter or superhero. Barton is humanized in a way readers probably aren’t used to. Fraction achieves this by tugging at our heartstrings and readers will find themselves rooting for Barton by the end of the issue. Pacing, in particular, is well done in this issue and Fraction adds minutiae of character to give complexity to his hero.

Fraction’s partner on Immortal Iron Fist, David Aja, illustrates Hawkeye. His work reminds me of Paul Azaceta’s: thick character outlines and gritty design. The result is simple-looking illustrations that hold a lot of detail and clarity. The imagery has a silver age feel, but with modern adornments. Basically, David Aja makes it look easy, and his work speaks for itself.

As a person with very little experience with the character, I thoroughly enjoyed the comic. Fraction throws in enough nuggets to satisfy longtime fans as well (you do get to see Hawkeye use his abilities, albeit in an unconventional way). I’d recommend Hawkeye without reservation and I look forward to seeing what Fraction and Aja have for us in future issues. 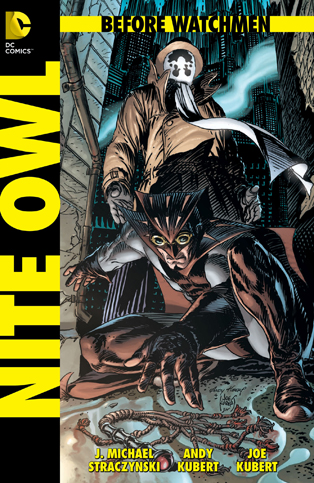 When I read a Before Watchmen comic, I’m looking for it to add depth to what we know about the characters already. So far, Darwyn Cooke has been the only one to do this successfully. J. Michael Straczynski failed at this in issue #1 of Nite-Owl, but I was pleased to find Nite-Owl #2 a better read, both in its characterization and its storytelling. I still have issues with both Straczynski’s writing and Andy Kubert’s art, but these have also improved since their fist effort a month ago.

Straczynski not only delves into Dan Dreiberg’s history, but he also tries to do the same with Walter Kovacs. The moments with Rorschach are an improvement over the last issue, where it seemed like Straczynski was writing a buddy comedy. The problem is that JMS, and other writers, rely heavily on what they know about Walter, and the results are a one-dimensional copy of his character in Watchmen.

Nite Owl, on the other hand, is given more life. We get to see Dan embrace the idea of heroism, even before he becomes a hero. JMS also adds some touching character moments between Dan and his mother, and he capitalizes on the celebrity status of the Minutemen and the role that they played in Dan’s development as a superhero.

Because JMS covers less ground in this issue, Andy Kubert’s art looks more focused and cohesive. Kubert plays with tone and mood and deftly uses close-ups for emotional effect. Like Dave Gibbons, Kubert works a lot with repetition of imagery and flashbacks conveyed through unifying transitory shots (like a reflection in a puddle becoming a reflection in a mirror). This makes connections between past and present seamless.

Nite Owl #2 is an improvement, and hopefully a harbinger of the story’s future. While it has flaws in establishing characters (particularly Rorschach), it succeeds in using detail from Watchmen to create depth of character that is not only engaging, but relevant to how the character appears in Alan Moore’s work. But the book is supposed to be about Nite Owl, and having Rorschach play such a heavy role detracts from the real focal point of the series. 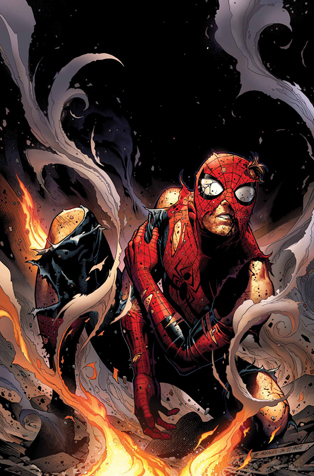 Bannen’s Book of the Week: Marvel’s big crossover event has read like a giant train trying to gain momentum while chugging uphill. It’s not that the series hasn’t been well written – it has – but it’s been a bunch of heavyweights throwing down with other heavyweights and match-ups geared towards pitting similar heroes against each other.

Narrated by Spider-Man, Avengers vs. X-Men #9 adds the needed element of humanity to move the conflict to a more personal scale. Peter Parker has faced incredible heartache in his role as Spider-Man but he’s always found a way to keep on keepin’ on and Jason Aaron brings this same determination to this issue, having Spider-Man take on Colossus and Magik, both of whom have been possessed by the Phoenix Force.

The result is emotional, painful, and 18 panels of Spider-Man getting the crap kicked out of him. But Spidey never gives up, and the cover says all it needs to about his state by the end of the issue. I haven’t seen an author, other than Brian Michael Bendis, write Spider-Man this well. Hopefully, the rest of the series will balance heart and action the way this issue does.

Because the comic is so loaded with chaos, Adam Kubert has his work cut out for him, but he succeeds in illustrating clarity amidst the confusion. The composition of the issue is very impressive in that it communicates the losing situation in which Spider-Man puts himself. John Dell, who inks the comic, captures shadows perfectly and adds impressive detail to character close-ups. This is particularly handy during Spider-Man’s fight scene where each hit and kick is punctuated with tangible images.

More so than the previous issues, Avengers vs. Spider-Man #9 strips the conflict down to its barest elements, and gives readers a tether, in the form of Spider-Man, to have a personal connection to an ethereal battle. Mega crossover series, like this, can get tiresome if not well executed. While AvX has its flaws, it’s still a great read, and one that shows the true definition of heroism.