Published by Dark Horse Comics, Brian Wood and Kristian Donaldson’s The Massive is the story of a group of environmentalists surviving in a world besieged by underwater earthquakes, the dissolution of society and dwindling supplies. It’s a slow burn post-apocalyptic story of life on the high seas. Sure, there are shades of Waterworld, but The Massive has more in common with Escape From New York or The Postman than it does with Shitty Mad Max’s Adventure at Sea.

The first story arc, “Landfall,” wraps up with today’s The Massive # 3. Titled “Unalaska,” the conclusion sets up a lot of character and story potential for the series. The environmental devastation shown in the first three issues has killed scores of whales, set offshore oil rigs on fire and shattered Antarctica. Cities have sunk beneath the ocean and canals have dried up. It’s an environmentalist’s worst nightmare come true.

The command crew of the Kapital serves as a political microcosm.

“Landfall” introduces and fleshes out the series’ three lead characters – Captain Callum Israel, second mate Mary and third mate Mag. They serve aboard the Kapital and are searching for their sister ship (the Massive). The narrative focus on these characters establishes the charter of their environmental group, Ninth Wave, and their goals in a world beset by environmental collapse. 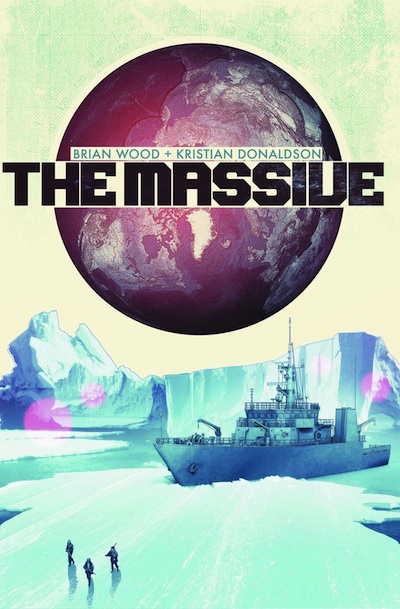 Ninth Wave is a pacifist organization in an increasingly violent world. Villages are leveled for a few liters of water and terrorists will kill for a ration of food or a flare gun. The main characters hold to their original, nonviolent mission of protecting the oceans, something Callum notes is even more vulnerable than it’s ever been. However, Mary has shown that she’s willing to kill when she has no choice, while Mag will stretch the idea of pacifism as far as he can.

The command crew of the Kapital serves as a political microcosm. Cal can hold his head high while Mary and Mag make compromises in order to survive. Mag is the first to bring up the idea of getting some weapons for self-defense after Cal and Mary are mugged in Hong Kong. Neither Cal or Mary are too keen on the idea, but Cal does think it wise to be more defensive in this new and shifting world.

While Wood and Donaldson take care to develop Cal, Mary and Mag through both the series’ present as well as its past, they also develop supporting characters within the narrative. It’s a subtle build, giving readers a gradually realized idea of their motivations, but builds crew personalities as well as story.

Wood and Donaldson use the language of comics to tell their tale. Through the use of flashbacks, the book shifts from the “present,” about 13 months after the world went to Hell, and the “past” – shortly after. It’s a clever way to avoid awkward infodumpy dialogue while simultaneously building the book’s world. 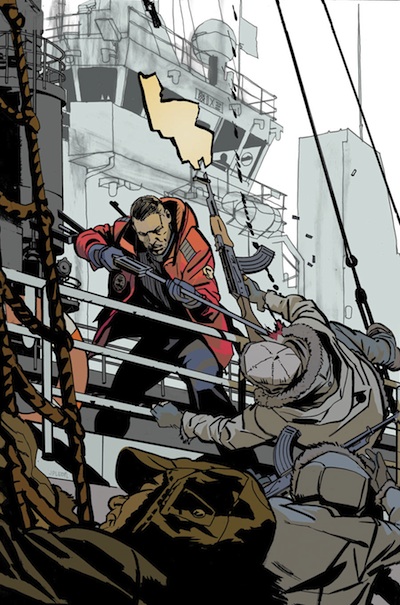 Dave Stewart’s colors are essential when it comes to the flashbacks. By layering a particular color filter over the past, Stewart shifts the audience back to a time when the Crash was fresh in the characters’ reality. Since there isn’t a lot of time between the flashbacks and the book’s present, the colors are a perfect way to express the shift in chronology.

The book is layered with mystery and suspense. Wood uses the back matter of the book to further expand the story. There are notes from Callum’s perspective that add to the world, memos from the United States’ Office of Homeland Security, Ninth Wave personnel files and photos of the various places seen in the book. There’s a lot in each issue of The Massive.

The mystery surrounding the whereabouts of Massive is just beginning. The cliffhanger at the end of issue #3 opens up several possibilities – promising a lot of story options – and the secret between two supporting characters regarding the Massive could drive a wedge between the crew of the Kapital.

Ian can’t stop reading comics. He tweets about them like crazy at @IanGonzales.