In the brittle détente between babysitters and the children who are abandoned to them, history has recorded some epic feuds. Remember the showdowns between 6-year-old Calvin and his beleaguered sitter Rosalyn in Calvin and Hobbes? Kids today are more domesticated and easily sedated with electronic toys – and videogames. But videogames also give kids new ways to torture their captors, which brings me to a story from a week ago.

It started when my son told me that he had sacrificed his babysitter on the bloody altar of Kali.

It started when my son told me that he had sacrificed his babysitter on the bloody altar of Kali.

They were playing Spelunky, the Derek Yu masterpiece that casts you as an explorer in a treacherous underground land. I bought Spelunky the day it hit the Xbox, and the first person I wanted to play it with was my son. This may strike you as strange. The grown-ups I know obsess over how difficult it is. A masterful roguelike platformer, Spelunky is fair but merciless. You have low health and little room for error, the levels change every time you start and you lose almost all of your progress every time you die.

Grown-ups find this maddening because we always want to make headway. We want to win the game. But kids don’t care about that. As well as a roguelike, Spelunky is also a sandbox. It has a vast possibility space, where you find different combinations of monsters, traps and gear and use them to engineer careful plans and ridiculous accidents. The inspired young critic Estelle Parkin has already weighed in with her rave and my kid is hooked as well, figuring out the traps and snagging the freeze ray and finding the golden monkey that poops gold. He doesn’t care how often we die; he enjoys every single life while it lasts, which just may be the point.

Spelunky is a wonderful toy box. But it’s also kinda dark. You can kill monsters but also human beings, and Yeti, who are endangered. It’s the first game he’s ever 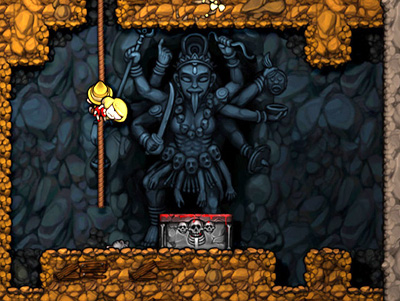 played that has a shotgun. And while we get to rescue cute helpless pugs, the dogs have a nasty way of dying from skull fractures when we throw them at too many spiders. By now, we’ve killed more pugs than a Deep South puppy mill.

And then there’s that sacrificial altar. If you’ve played the game, you’ve probably seen it: a giant blood-soaked slab beneath a frightening relief of a goddess. If you carry someone who’s dead or dazed and drop them on the altar, their remains go poof and Kali tells you she is “pleased.” Please her enough and she’ll give you a gift, like spiked shoes or climbing gloves.

My kid and I had tried this a few times, with dead cavemen and pugs. Once or twice, if one of us died, the other would grab the corpse and throw it on the altar – why not? We always help each other, even at the cost of our souls. But when I heard about this incident with the babysitter, I learned something disturbing.

Now, our babysitter is no Rosalyn. Laid-back and capable, she doesn’t get ruffled by nonsense but has no trouble laying down the law. Truth be told, in an emergency, my kid would probably last longer with her than with me.

I asked her about what happened. She explained that he told her he wanted to pick her up and carry her around, “so he could ‘protect me.’” Though she plays a lot of videogames, the babysitter is new to Spelunky. She had to rely on my son for guidance on how to survive.

She trusted him. Then he gave her to Kali.

It didn’t seem to bother her. I mean, she said something about how he might grow up to dye his hair black and keep dead animals pinned in his bedroom – but I think she was kidding about that. What really bugged me was that he would lie to her. He had a partner, and he betrayed her.

My kid and I had a long conversation, where I tried to get him to see that he was wrong and to feel a little visible shame for it.

“Do you think it was fair to trick her, when you knew the game better?”

“How would you feel if I tricked you and sacrificed you to Kali? Would you be okay with that?”

We went back and forth some more, but undercutting the entire debate was the fact that Spelunky is only a game and the point of the game is to study how everything works. You’re supposed to try new things and see what happens – whether you’re hitting a mantrap with a rock, or dropping a human being on an altar. I can’t get mad at my kid for exploring the system, even if it led him to evil. And am I to blame, for introducing him to a game about human sacrifice? Heck no. I didn’t put that stuff in there.

No, the person I’m really upset with is the babysitter. Because my kid was doing an experiment: he wanted to see what would happen if he betrayed his partner. And she let him get away with it – because she’s patient, because she’s awesome and because, hey, it’s only a game. She could have given him a time-out, sent him to bed or just stopped playing the game. She could have shown him that the result of his little “what if I sacrifice the babysitter” experiment should be swift and harsh punishment; instead, she took the high ground.

Rosalyn would be so disappointed.

Chris Dahlen is secretly Lawful Evil. Dig for evidence on his Twitter @SavetheRobot.

The Halloween That Should Have Been

Rookie of the Year: Your Invitation to Twin Peaks Fest 2012