I spoke with Kelly Roman last summer about his graphic novel, The Art of War. Recently, however, I finally got a chance to read the entire comic. While Roman hinted at some of the craziness that occurs, he completely undersold the depth of the tale. Built upon the ever-diminishing state of the country, overwhelming global chaos and the future of the financial system, Kelly Roman’s story is impressive in scope, horrific in its focus and detailed to the point of awe. In fact, after reading The Art of War, I urge you, as a fan of comics, to purchase a copy when it comes out on Tuesday.

The Art of War is not a comic that one reads lightly. In fact, I think it’s a dense, multi-layered story that will take several reads to fully appreciate and comprehend. The story is centered on Kelly Roman (the main character shares his name with the author), a war veteran whose brother mysteriously died while working for the financial powerhouse company Trench. Roman tries to figure out the cause of his brother’s death while at the same time sculpting his own plans for revenge, dealing with a tragedy involving his former lover and aiding a father whose declining health is a driving force for his success. 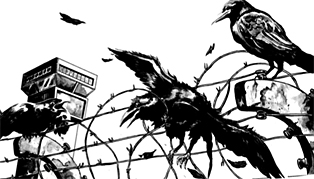 The story is peppered with quotes from Sun Tzu, the military strategist who composed a book focused on aspects of warfare. Much like Alan Moore did in Watchmen, Roman employs a detailed story that incorporates a strong and deliberate narrative voice. The main character is flawed, but his motives are pure, and while I don’t want to spoil the ending, I guarantee fans will find it complicated and bittersweet. It’s not a neat Hollywood ending but, given the current state of our world, anything else would feel false.

Artist Michael DeWeese is the person who helps the story come alive. The comic is illustrated in black and white, save for a few moments involving red. But his panel construction is beyond impressive, and he creates images that are clear, effective and disturbing. Even when readers put The Art of War aside, the art will stay with them for a long time afterwards. DeWeese captures the violence of the story, as well as depicting the horror of the world in which the characters live. There are elements involving robotic implants, insects and gore, and DeWeese illustrates these with such skill that the art takes on a life of its own. I can’t emphasize enough that the story is effective because of the imagery that accompanies it. DeWeese and Roman are a powerful team.

The Art of War is a great book. It’s a story that requires a lot from its readers, but one which is also rewarding. Rich and detailed, and loaded with elements from our world and a future that – God help us – may come to be true, The Art of War is a scary look at corporate greed run amok, crippling government failures and the ever-changing – and increasingly competitive – global market. Kelly Roman is impressive as an author, and Michael DeWeese is spectacular as the artist. If there’s a book that should remind readers that comics can be works of literature and art, it is this one.

The Art of War, from HarperCollins, is available now.

The Art of War