I guess I’m proud of getting fired from The Man Show, though it didn’t make me feel good at the time. It’s not like I was a staff writer or anything. This was my last year of grad school – and my gig at on the lame Comedy Central show was an unpaid internship set up through my  master’s program. But that was the rub. After three days on the job I got a phone call informing me that the staff at The Man Show didn’t want to not pay me any more.

In case you’re too young to remember, The Man Show was a stupid variety show starring Jimmy Kimmel and Adam Carolla. Even then I thought the show was crappy, but I was willing to rub elbows with boors if it meant learning how to kick down the door to TV writing. I’d only been in Los Angeles for two years, but I already saw that writing for a television show was a cool gig – if you talked your way onto the right show.

I finally spoke up, “Slim Goodbody,” I said. “It was Slim Goodbody from The Great Space Coaster.” I wasn’t congratulated. Just scrutinized.

Thanks to the connections of a classmate I spent an evening at a taping of News Radio. As a person curious about how entertainment is made, it was a good night. We saw Phil Hartman entertain the studio audience between takes with hammy, totally pandering but absolutely joyful re-creations of EVERY character he’d ever done. I smoked a cigarette with Maura Tierney on the show set (I was on the couch in Dave Foley’s WNYX office, she was leaning on the desk). The highlight, for me, was when producer Paul Simms took us on a tour of the production office and told us of a new show he was trying to pitch, about people working for the Peace Corps in Southeast Asia. Of particular interest to me was the writers’ table – where script reads and joke sessions usually happen. The broad wooden table was crammed full of PCs end to end. “We’ve been playing a lot of Quake,” Simms shrugged. I’m pretty sure I was the only one who knew what he was talking about, but I knew that I wanted in.

My duties on The Man Show were very light. The guy that hired me was a young kid who was related to somebody in charge. He tasked me with jobs like finding contact information for the boxing cutman Chuck Bodak (this was, I may remind you, before Google was invented) and asking the guys in the art department to cut and paste the faces of Kimmel and Carolla onto the bodies of gay porn stars for an in-office gag. I did as I was told (which wasn’t much) and tried to learn as much as I could (which wasn’t much either).

I probably should have kept my mouth shut. Nobody there was really very chatty, but I love to fucking talk. If I had to guess, I’d say that part of the reason I was unceremoniously canned was the fact that I tried too hard to strike up conversations. There was a fearful vibe there – like dudes were protective of their turf and didn’t want anybody else putting a stake on their claim. Only the stand-up comedian Jeffrey Ross was friendly – my guess is that he was confident enough in himself to be charitable.

I think my biggest fuckup happened during a joke 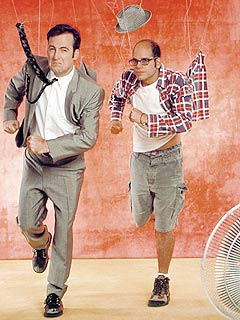 meeting. I was invited to sit in on a brainstorm session. I was smart enough to keep my mouth shut and watch the professionals work, but when the meeting ground to a halt for what seemed like forever because nobody could think of the name of the guy who wore a bodysuit covered with veins and muscles on that kids’ show, I couldn’t keep my silence. I agonized listening to them coming back to it over and over again. What the fuck was his name? I finally spoke up, “Slim Goodbody,” I said. “It was Slim Goodbody from The Great Space Coaster.” I wasn’t congratulated or thanked, really, for moving the meeting along. Just scrutinized.

I’m sure I was guilty of more than that faux pas. The Man Show was shot in Hollywood Center Studios – the same tiny lot where they made my favorite sketch comedy program Mr. Show. I went to tapings of that brilliant HBO show whenever I could and I’m sure I gushed a little bit about how great that Bob Odenkirk, David Cross and the rest of those writers and comedians were. I suppose that’s a bit like working at McDonald’s and spending your whole shift talking about The French Laundry.

Just to let you into my head a little bit more, I’ll tell you that I was probably a bummer to be around back then. Just before getting the job, I injured my back. It was a hernia of my L4 disc – a condition that, initially, made standing and walking excruciating. Drugs and physical therapy offered slight improvement, but I was still walking gingerly, with rigid legs and a stiff back. I also had an injury that didn’t show – a new bout of anxiety so fierce that I found myself in an emergency room convinced that I was having a heart attack. I’m not saying that my bosses at The Man Show said, “Let’s fire the guy with the broken back who has panic attacks – he’s just too depressing,” but those bullet points certainly don’t help make you an attractive hire in a holistic sense.

I washed out of screenwriting after that. I probably would have given up with or without my failures at The Man Show. I was so terrified of failing to break into the industry that I didn’t even try. Apart from my thesis project, a crappy screenplay about ecstasy dealers called Coming Down, I never finished another script. And that is, you might guess, the first step in getting a job on a TV show. If I wanted a gig like that News Radio gig I would have to write spec scripts of shows like Malcolm in the Middle or Futurama and use those samples to get my foot in the door. I never wrote those samples. I never even looked at the door after that.

When TV Was a Timepiece