It’s only my second day as a stay-at-home dad and I’m already in tears. Halford sleeps fitfully in my lap – he’s on top of a Boppy nursing pillow. I should be stealing a nap while the kid sleeps. It’s only 10 in the morning, but I’m already feeling worn out.

I haven’t succumbed to the stress of keeping a 3-month old alive. At least not yet. I manage to keep his gut pumped full of milk and his butt wiped clean of poo. I’m crying because I’m watching one of Star Trek: The Next Generation’s bona fide tear-jerker episodes.

I haven’t succumbed to the stress of keeping a 3-month old alive. At least not yet. I manage to keep his gut pumped full of milk and his butt wiped clean of poo.

Data, after learning new positronic brain hacks at a conference, decides to build an android of his own. He calls his child “Lal,” Hindi for “beloved,” and allows the blank slate of a being to select its own appearance and sex. Lal opts to look like actress Hallie Todd and immediately begins winning the hearts of the crew. Picard, initially driven to a full-on head palm by Data’s procreation, comes around when an admiral declares Data unfit to raise what he sees as Federation property.

Earlier in the week I stumbled onto an argument that Picard’s strict adherence to the Prime Directive evinced some of the worst traits of liberalism. I don’t want to get into a boring debate about that crap, but I’ll be damned if Picard didn’t name-drop “liberty” when he fought Admiral Haftel for proposing that the state knew better how to raise a child than its own parents.

Clearly, that kind of stuff isn’t what drove me to tears (not even of boredom). It was the inevitable turn. The stress of potential separation from her father triggers the emotion of fear. Androids, of course, are incapable of experiencing any emotions, but Data managed to make improvements to his daughter – she had already shown the ability to use contractions. But feeling is more than a linguistic parlor trick. Lal stumbles to Deanna Troi’s chambers in a state of panic, frightened of being torn from her father’s side. She stabs her fingers at her chest, “This is what it means to feel.” 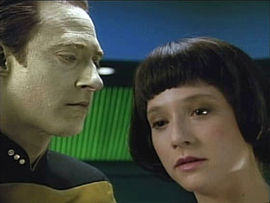 Things, of course, go downhill. The emotions cause a cascade failure in Lal’s brain. She can’t survive the shock to her system, despite the best attempts of Data and the meddling admiral. Data and Lal share a moment before he deactivates her. Lal expresses her love for Data. Data admits that he can’t reciprocate. “I will feel it for both of us,” she says before shutting down.

I’d like to think that it was sharp sci-fi melodrama that reduced me to tears and not some weird cocktail of stay-at-home dad hormones creeping around in my bloodstream. But I fear that caring for a child – taking on this new, massive responsibility – is making permanent changes to my positronic matrix.

Later, after a feeding and a nap, the movie Napoleon Dynamite played on Cinemax. When those scrawny kids suffered through the indignities of high school, I couldn’t help but look down at Halford, contemplate what the world has in store for my offspring and think, “What have I done to you?” More tears are sure to come.

Pretension +1 is a weekly column about the intersections of life, culture and videogames (and TV). Follow Gus Mastrapa on Twitter @Triphibian.