America is a country of annual traditions. While most people highly regard holidays like Christmas and Thanksgiving, there is a very special biannual tradition that holds a coveted place in my memory. Every year on July 4th and New Year’s Eve, while adults drank strange beverages from red cups or spoke of resolutions, The Twilight Zone occupied my TV and my mind. I know that there was a time before the Syfy channel was part of our cable lineup, but it certainly must have been a darker one as I am unable to recall it. I can’t imagine what I would have done through most of those terribly boring parties without being glued to the TV trying to figure which “person” in the diner was an alien, or waiting for the reveal of the pig-faced doctors in “Eye of the Beholder.” The Twilight Zone acted as a sort of gateway drug into the horror genre, and I remember having horror movie sleepovers later on in my childhood based solely on an attraction initially developed from Rod Serling’s black-and-white classics. 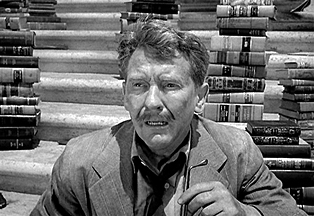 Gathering around the TV with all of my friends and family, sometimes cowering in fear, is one of my fondest memories from childhood. As the night wound down, parents and grandparents often joined in and recollected their first memories of watching The Twilight Zone and how much they loved it. Everyone has a favorite episode or moment he or she talks about. Whether it’s Burgess Meredith whimpering, “It’s not fair,” or watching William Shatner’s mind unravel 30,000 feet in the air, Twilight Zone has everything that true storytelling requires, which is why we flock back twice a year to watch. It was with extreme joy that my brother and I pleaded to go to Disneyworld the year that the Tower of Terror opened. Having the opportunity to enter a world where you’re placed inside an episode is more than we could have dreamed. The Twilight Zone has become as much a part of popular culture as the holidays it’s shown on. 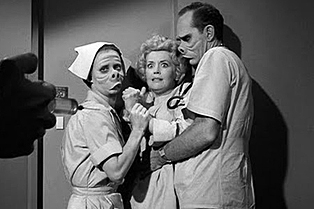 As we venture further through time and space, technology keeps up with this beloved tradition. As the marathons play out in all their 24-hour glory, so, too, does Amazon’s fire sale of the DVDs and Blu-ray copies for home consumption. What’s funny is that Netflix subscribers (myself included) have access to these episodes all year round. I can honestly say that watching them alone, and not on one of the aforementioned holidays, is simply not the same. Be it nostalgia or tradition, it’s undeniable TV party material to this day. So if you haven’t already, escape the heat or the cold and go inside with your loved ones. You may find yourself in a dimension not only of sight and sound, but of mind. You may find yourself in a Twilight Zone TV party.

Unlock the door to another dimension on Twitter with Erik @Erock88!
For our slightly older readers who grew up in the New York/New Jersey area in the ’80s and early ’90s, your dear Unwinnable editors present a little reminder of the original (and far superior, if only for our old-timer nostalgia reasons) Twilight Zone New Year’s marathon, shown each year on WPIX channel 11.