Ah, the 1980s…the global tension, the regrettable fashions and Max Headroom. It all made so much sense to us back then. Now, looking back, it looks as absurd as wearing leg-warmers while standing in line to buy Spandau Ballet records. And yet, at the time, so many of us did just that.

For the uninitiated, Max Headroom (played by Matt Frewer) was basically a distillation of the 1980s zeitgeist: the slightly-edgy (read: on cocaine), stream-of-consciousness (read: borderline hip Tourette’s Syndrome), tending-towards-shallow smarm that encapsulated our vision of the Future (read: we were pretty sure we were doomed at the time). The character was born on a BBC pilot, 20 Minutes into the Future, that introduced crusading video-journalist Edison Carter as he takes a violent turn and his brain patterns are saved by a pirate broadcaster as this scrambled amalgam, Max Headroom. You should check out the original pilot – it’s a low-rent, hi-tech fun TV movie. Just ask Blank Reg, OK? 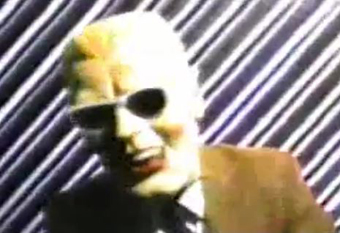 The character then appeared in a revamped BBC TV show series, an Americanized version, countless Coke commercials, a British videogame, a music video by Art of Noise and a pirate-takeover of a Chicago TV station in 1987. Actually, that last one was just someone wearing a Max Headroom mask who interrupted the station’s broadcast for less than a minute, but still. At the time, we just couldn’t get enough of this character. Then we did, and that was pretty much that, although the likeness has appeared, or been referenced since, in song, film and TV show.

It’s endearing to watch now because, for a cyberpunk character, the show was remarkably low-tech. Max was not even computer generated! Instead, Matt Frewer wore various prosthetics (including solid vinyl pieces for the various suits he wore) that made him appear computer-animated. According to him, this took long hours in the makeup chair. The graphic backgrounds were, for quite some time, traditional animation – not computer-generated at all. But, oh man, we loved his smarmy false-charm. According to creators, Max was based on the Ted Baxter character from The Mary Tyler Moore Show. You can go Google what that actually means, kids… I’ll wait.

In a mix of apparent fawning and a rattlesnake’s ability to turn and strike with sarcastic teeth in a millisecond switch, Max made for a very entertaining host, interviewing/sparring with the likes of William Shatner, Michael Cain, Boy George (who, in particular, gives as good as he takes from Max) and Sting, among others. It can be ascertained from these interviews that Max loves golf, mostly by the way he pushes it on his guests and his many attempts to turn the subject of conversations towards it.

Truly the biggest slice of bread on which Frewer’s career was buttered (who has done quite a bit of guest-spots and voice-over work over the years including Moloch in the film adaptation of The Watchmen), Max Headroom was as much a part of the 1980s as low-cost Ecstasy (this was before it became illegal…ha, ha, you kids!) and the overwhelming fear that President Reagan would launch the nuclear first strike of World War III. I guess we were all a little bit crazy back then, over-animated and just discovering video technology and what it could do. May History find it in its collective heart to f-f-f-f-for-for-for-forgive-give-givegivegive us…

This story originally appeared on Network Awesome and is reprinted here in a slightly edited form with their kind permission. The author, Ryk McIntyre, is a multi-hyphen sort of person. Poet, critic, performer, workshop facilitator and co-host at both GotPoetry! Live (Providence) and Cantab Lounge (Cambridge, Massachusetts). He’s been living in Rhode Island for the past six years with his wife and daughter. Ryk has performed his work at Boston’s ICA, NYC’s New School, Portsmouth, NH’s Music Hall and Lollapalooza, to name just a few. He has toured the U.S., performing in countless poetry open mics and festivals. He turned down Allen Ginsberg once.