This week, an open letter to Unwinnable contributor Gia Grillo:

I agreed to watch a single episode of My Little Pony: Friendship Is Magic with you, and I’m writing now to remind you that I won’t be doing that again. Ever.

It’s not that I thought the show was worthy of disdain, and by no means do I think less of you for being a fan. Still, I somehow find myself in the odd position of having to explain why it should be obvious to anyone that a tall, bearded, heterosexual sports editor with a graduate-level education and a healthy social and professional life isn’t the target audience for squeaky-voiced, tramp-stamped cartoon ponies with colorful hair who throw endless glitter-littered parties, bark orders at emasculated, gemstone-guzzling dragons and have the emotional maturity of 8-year-old girls. 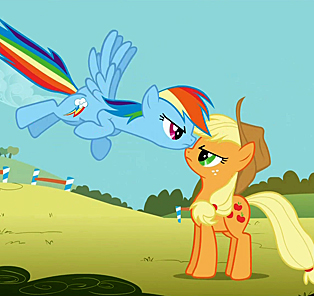 This is surprisingly complicated for a number of reasons. One, as a Downton Dude, I reject such stereotypes and believe in a person’s inalienable right to watch whatever dreck he or she would like to. It would be hypocritical in the extreme for me to make an exception for Bronies in this regard.

In truth, you can be a tall, bearded, over-educated professional or a tall, bearded uneducated wastoid – notice how I completely ran the gamut of masculinity there – and love My Little Pony for its biting social subtext or simply because you adore Rainbow Dash’s multicolored mane.

And I’d be lying if I said I didn’t identify with Pinkie Pie’s post-party depression, from which she is suffering at the outset of the episode we watched together, and which is manifested in her desire to throw a hastily-arranged afterparty the very next day. Often, the worst part of hosting an event is not the planning or the shopping or the actual entertaining; it’s later on, when your guests have gone home, the festive atmosphere dissipates, and you drift into melancholy, reflecting on all the fun you’ve just had, and missing your departed company with more than a tinge of sentiment.

When Pinkie Pie’s afterparty attempts are ultimately thwarted by what seems like all of her friends ditching her, it’s a poignant reminder of the stress inherent in worrying no one will show up on the day of your soirée – something that can drive even the least OCD’ed among us to make frequent trips to our Facebook event pages or party-hosting websites of our choice, making note of the latest RSVPs and wondering why our supposed third-best friends still haven’t even read our Evites yet.

It’s hard, too, not to empathize with Pinkie Pie as her friends, one by one, invent awkward excuses for not being able to attend said afterparty. I mean, we’ve all been there, haven’t we? We’d be sociopaths if we couldn’t relate to rejection. And yet even in Pinkie Pie’s suffering, there is an element of confusion and mystery. Why are her friends suddenly ignoring her? Why are they carrying out secret missions that everyone seems privy to except for her? Why would one day all of her friends enthusiastically gather with her to celebrate her pet alligator’s birthday, and the next day conspire so blatantly against her, darting away whenever she approaches, hiding what they were doing as if her very knowledge of their affairs would tarnish them irreparably? 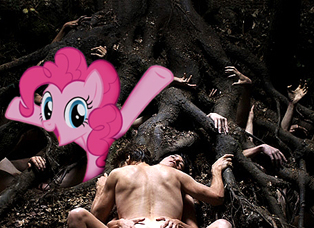 Who wouldn’t put on a pair of novelty mustache glasses and follow them around surreptitiously, trying to unlock the mystery? And who, when identified, wouldn’t go one step further by disguising themselves as a bale of hay, tiptoeing from corner to corner, gaining ground on them inconspicuously, only to overhear them say such odd things like, “I can’t believe Pinkie Pie planned a party today of all days!” and “I think she’s on to us. We can’t let her find out and ruin everything!”

What could possibly be the meaning of it all?

At this point, Pinkie Pie has become manic, and understandably so. Her feelings of isolation reach a boiling point in a scene that takes place later on back at her house, where she’s decided to throw the afterparty anyway – for her real friends, including a bucket of turnips, a pile of rocks, a clump of lint and a sack of flour.

By the time Dash arrives to pick her up for her surprise party at a nearby barn, Pinkie Pie’s grief has manifested itself in delusion and uncontrollable anger (Lars Von Trier examined a similar theme in Antichrist, a movie we watched later in the evening). She even appears desaturated on screen, and her normally perky hair droops over her ears.

Alas, there’s a happy ending. When she realizes her mistake – and, less so, her own folly – Pinkie Pie is able to enjoy her friends’ company once again, and her signature color and perkiness return, culminating, to the delight of all and sundry, in a festive dance – and a joyous denouement.

Wait, so what was I saying?

I got nothing out of your juvenile bit of cartoon fluff, Gia, and for that reason, among others, I’m never watching My Little Pony with you ever again.

But we can still be friends – as long as you promise not to make me sit through the rest of Buckaroo Banzai.

Matt Marrone’s little sisters played with My Little Ponies when they were kids. Then they grew up – and stopped. You can follow him on Twitter @thebigm.

Best of Unwinnable - Archive, Rookie of the Year, TV

Rookie of the Year: Cheers For Fears

Gods and Audiences – The Horrors of Filmmaking