I have always had mixed feeling about Tiny Wings, one of the earliest indie successes of iOS. It took the simple get-as-far-as-you-can, one-button gameplay of Canabalt (and a few others at that stage) to tell an uplifting and beautifully simple story about a bird that couldn’t fly but wouldn’t give up, either. The bird’s wings were too small, you see. So instead, she would launch herself down hills to go flying through the air ever so briefly. With a delighted “Wahoo!” the camera would stretch back as the bird passed quickly through the clouds, pretending she was flying for the briefest length of time before she plummeted back to earth to do it again and again and again.

It’s a bit corny, to be sure, but with so many videogames about inevitably dying or failing, it is a lovely little proverb of never giving up on your goals, no matter how unobtainable they may seem. The whole aesthetic tone of the game reinforces this. The uplifting music and the grainy, curvy, Dr. Seuss-ish landscape that helps the bird intermittently reach her goal all contribute to this delightful positivity. Tiny Wings is – has always been – happy. 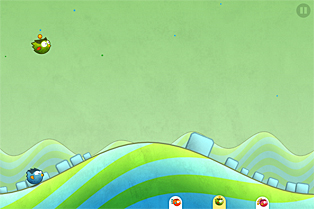 Enter Tiny Wings 2, released last week as a free update to the original game alongside Tiny Wings HD for iPad, rendering the game’s visuals in absolutely magnificent high definition. It adds two new chapters alongside the original game’s protagonist’s journey across the islands. Chapter Two – “Flight School” – is the main focus of the update, giving the player access to the original game’s bird’s four young chicks (who, it seems, have inherited their mother’s tiny wings) in a disturbingly Darwinistic race to be fed the largest fish. Chapter Three – “Hill Party” – is only available on the HD iPad version and is a split-screen multiplayer race mode.

“Flight School” is where players will spend most of their time. Just like the original Tiny Wings, it is absolutely adorably presented. I especially love the starry nighttime skies, under which the four baby birds actually glow. However, something is lost in transferring the original game’s single bird’s adventure into a race for survival between four birds. The game is no longer about “trying your best” but is now about winning. Trying is no longer good enough.

Which, really, is kind of sad. I never played Tiny Wings to win. I played because I wanted to try. Because the little bird wanted to try. After reaching for my dreams and the clouds, fighting my siblings for the largest fish just seems somewhat… petty. 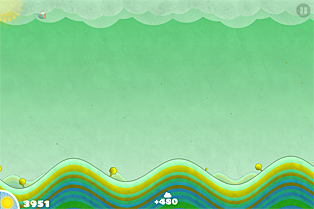 The islands are now completely authored and sculpted. Instead of traveling across islands in a single playthrough, each race is a single, specific track. Most of these tracks, unfortunately, don’t match with the game’s central mechanic of aiming for a valley and launching out of it. Long, flat plateaus often lead into steep uphill climbs that you simply can’t foresee without repeating the track multiple times and learning it perfectly. The game’s new additions, the trampolining flowers and speed-sapping pools of water, further just complicate and dilute the game’s primary pleasure. If you have missed a specific hill half an island ago, there might be no avoiding a large pool of water, giving you nothing to do but slowly swim through it as your three siblings fly past.

You can never see too far ahead in Tiny Wings, but that was never really a problem. You improvised as you went along, scrutinizing the ground as you soared overhead, targeting specific dips to keep up your momentum. Tiny Wings 2’s tracks clearly have a specific racing line, an optimal route. The computer-controlled birds seem to know them, but you simply can’t without repeatedly failing. This makes the game more frustrating than it is worth.

This is slightly less of a problem in the multiplayer “Hill Party” mode, where the only bird you are competing against is a fellow human as likely to fail as you are. Winning is not simply a matter of finishing a race first, but reaching a certain number of points first. Points are scored for winning a race, and more points are scored for winning by a larger margin. The same course is raced over and over until one player gets to the point goal. This means that you are forced to repeat the track and actually have a chance to learn it to some extent.

But ultimately, Tiny Wings’ beautiful tone of doing your best completely jars with the sequel’s competitiveness. The music is lovely; the HD graphics can only make you grin; but I don’t want to win. I don’t want to be the best. I want to be a stubborn and optimistic little bird with deformed wings who doesn’t care about winning or losing but just about touching the clouds for a few seconds. That’s all.

An Interview with Martin Eden, Creator of Spandex: Fast and Hard