Martin Eden’s book Spandex: Fast and Hard, which centers on a group of gay superheroes, was recently published by Titan Books. Eden was kind enough to share some words with Unwinnable’s Brian Bannen about Spandex, writing and the state of homosexuality in comics today.

Unwinnable: In trying to write a story about gay superheroes, did you want it to be humorous, or were you hoping to avoid humor in order to gain validity for homosexuality in comic books?

Martin Eden: Any comic I write would have a mix of humor, drama, horror, romance and shocks, so I’d be incapable of writing something without humor! Even the heaviest, most serious Spandex issue has elements of comedy. And I think if it had no humor in it at all, it would just come across as too earnest and maybe patronizing, so that would backfire anyway. 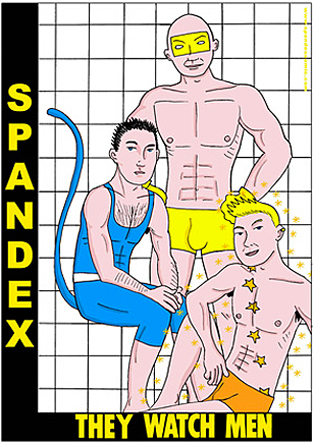 Unwinnable: In writing about gay characters, did you try to avoid stereotypes and clichés, or did you embrace them?

M.E.: A bit of a mix! I mean, I joke around with stereotypes – like the 50-foot lesbian villain in the first issue wears a k.d. lang t-shirt, and there’s a villain called “Muscle Mary” and so on. But I’m playing around with the stereotypes and “owning them.” It’s usually very tongue-in-cheek, and luckily most people get it and see the humor.

Unwinnable: Did you worry about the reaction this book would receive from the gay community or even the straight community for that matter?

M.E.: I didn’t really worry, because I wasn’t setting out to offend anyone. Plus, when I started working on the project, I didn’t think anyone would actually read it! I just worked on the first issue on my own and printed up copies to sell at conventions and give to friends. So when it got a bit of media attention, that’s when I started to think, “Gosh, maybe I shouldn’t have done that,” and “Maybe I should have called that person a different name, just in case someone got offended.” But what’s done is done, and I’m glad I didn’t change anything.

But what shocked me was how negative some people can be on the Internet. People can be nice, but some people can be very nasty and vicious in Comments sections! I soon learned not to read those bits. Even now, if I do an online interview, my friends will tell me, “Whoa! Some people really hate you in the Comments.” I don’t want to get involved with all of that. Let them get on with it!

People will get offended by pretty much anything you do. I get angry emails from people over things I don’t even think twice about. I get emails like, “Your portrayal of transvestites is offensive” – and I email that person to try to talk to them, but they never seem to want to discuss it. I learned quite early on that you really can’t let people’s opinions worry you too much, so I don’t.

Unwinnable: In the first issue, Liberty seems like the hero of the series and the focal point of the story, but by the third issue, Glitter seems like the true hero and the most powerful person of the arc. Was this intention, or did it happen organically?

M.E.: I want the series to be this weird, unpredictable soap opera where you don’t know who’s going to appear where! I like playing around with the emphasis a lot. So, for instance, half of the team aren’t in issue #3, and then Liberty isn’t in #4 at all, but she takes over #5. I’ve got eight issues of Spandex to play with, and each character gets the limelight at some point. 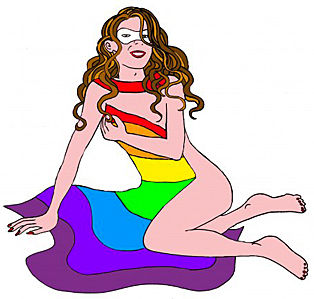 Put it this way, when I was growing up, you’d get a super-team comic, and every character would have to be painstakingly introduced and given equal airtime – and then suddenly, you’d get something like Claremont’s X-Men, where sometimes you’d get a solo issue, or sometimes a couple of characters wouldn’t be around in a few issues. Also, I was a fan of The Sandman series, where the focus shifted throughout the cast frequently. I like that fresh approach to comics, and I just like to keep the readers on their toes.

Unwinnable: If Spandex is to be a weird, unpredictable soap opera, how do you approach the writing process?

M.E.: I don’t feel like I really write Spandex. I let the ideas flow, and the story just goes its own way. I guess that’s why it’s so unpredictable – because even I didn’t know early on what would happen. When I come to script an issue, it’s just a question of collating all the notes I’ve made and thinking, “What is everyone’s role in this issue?” and it just all comes together. If I have to force the writing, then it doesn’t work.

Luckily, an issue takes a few months to draw, so by the time I start scripting the next one, the script will all have developed. And even then, the story or dialogue might change in the months I’m working on it. I really like that process, and that I just keep adding and adapting each issue until it’s as good as I think it can be.

Unwinnable: Nadir is an interesting villain in that she has an ability to make people relive their worst moments. What was the genesis of this villain?

M.E.: Well, I wanted to do a more serious issue, something to really stretch the characters. I went through a few different ideas until I hit upon the grey-world idea. Nadir is a word that has been going around in my head for a few years, ever since the 2000 AD series Zenith (the word Nadir is the opposite of Zenith), and a lot of my characters evolve from words. So I had the name, and then I had to develop the look of the character. The issue is about deeper concepts and is sort of a metaphor for mental health issues, and I wanted Nadir to just freak people out. So I thought about what freaks me out and Nadir became a mix of a spider-like character, a weird mimic with Michael Jackson-style features and he/she has a freaky, creepy smile. I also thought, “What’s the gay spin here?” so I made her/him non-gender specific – I love genderless villains! 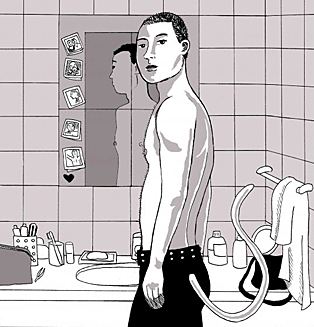 Unwinnable: Glitter, in particular, isn’t directly affected by Nadir but suffers more than the people under her spell, specifically because he’s the only one who remembers her. Was there a subcontext to this? I’m thinking specifically of Glitter’s interaction with his father, who is on the verge of killing himself when Glitter walks in.

M.E.: The bit with Glitter’s father has no direct subcontext, but it is representational of the tough side of coming out. I think, while some people have okay experiences with it, some have bad ones. The thing with Glitter is that he is perhaps one of the most positive characters in the series – he is quite extrovert and funny and maybe a bit superficial – and that’s why I wanted to focus on him. I actually wasn’t a big fan of his, so I wanted to dig away at him and find out the real person underneath it all – and now I really like him. And yes, it’s a bleak ending for him, but sometimes the people who smile the most are hiding the most pain. Glitter is a very strong character. He’s been through a lot and he’s survived. Most of my characters are like that.

Unwinnable: What do you hope this book does for the homosexual community?

M.E.: I actually don’t have a huge agenda. I just want to create something fun, something to make people smile, something unpredictable. I’m just telling the story that popped into my head. I’m not ticking off a checklist like, “Oh, I must do a gay wedding” or “One of the characters has to get an STD.”– The characters are at certain times in their lives and this is the story that wants to be told.

Also, Spandex isn’t just for the homosexual community – I hope it’s a story that will appeal to anyone. Issue #3 indirectly deals with depression and that kind of thing can be experienced by anyone, gay or straight.

Unwinnable: What about your own experiences? How did they come out in this story? Are there moments in Spandex that are autobiographical?/

M.E.: On a surface level, you have the kind of experiences that are more practical. Like some of the characters’ names are taken from good friends of mine. Or then, I love Brighton and I love Japanese culture, so that’s all in there. 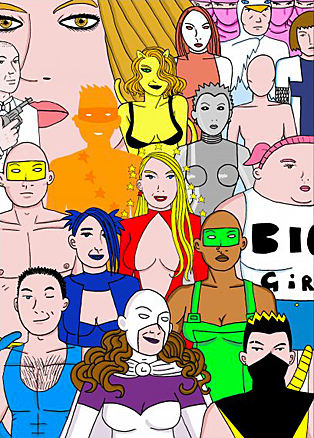 I don’t want to make Spandex an autobiography, but it does seep in. Like, issue #3 addresses some problems I’ve had in day-to-day life, or some characters’ romantic problems have mirrored my own. And sometimes it even just creeps up on me, like I was dealing with elements in the relationship triangle between Joanie, Alicia and Juliet – and I realized that something I was going through was in there – but I was the villain! But then it reflected back, and it dictated the way the story went.

Unwinnable: Recently, Marvel had a same-sex marriage occur in its series Astonishing X-Men. DC is also exploring homosexuality with its characters Midnighter and Apollo in Stormwatch. What do you think of this recent influx of homosexuality in comics? Do you think companies are doing this for sales purposes, or are they truly concerned with being more open-minded and inclusive?

M.E.: It is a pretty big coincidence that President Obama made his gay marriage comments and then all the gay stuff started up in comics. I think, generally, comics are open-minded and inclusive – if you look at Northstar, he’s been written really well for quite a while now. The sad thing is, though, that I didn’t feel the Astonishing X-Men issue was very good. I think any new reader would have been a bit confused about some elements of the story. That issue represented a lot of what’s bad in comics these days, sadly. Everything seems geared towards 6-issue trade paperback collections, so individual issues seem pointless. If the big companies don’t start giving satisfying, value-for-money reads, I think they will continue to lose readers.