At their I/O developers’ conference last week, Google announced and unveiled the latest version of its Android OS, v4.1 – Jellybean, as expected. Of course, given I/O’s position as a developers’ conference, Google saw fit to get it into as many hands as possible right away. This way, apps can take advantage of the new features as soon as the OS is released to manufacturers and Nexus device owners in a few weeks, so an emulator image was included in the latest software development kit. And, as expect, hackers have taken that SDK image and have started porting it to phones, the Galaxy Nexus being the first one.

A developer preview of a new OS that isn’t 100% optimized for my phone? I’m in!

So, last Thursday, I flashed it onto my device, then flashed it a few more times as fixes started rolling in. What do I think? It’s a step forward from Ice Cream Sandwich (Android 4.0.x), but not a huge one, as the 4.0 -> 4.1 jump implies.

The highlights for me so far: 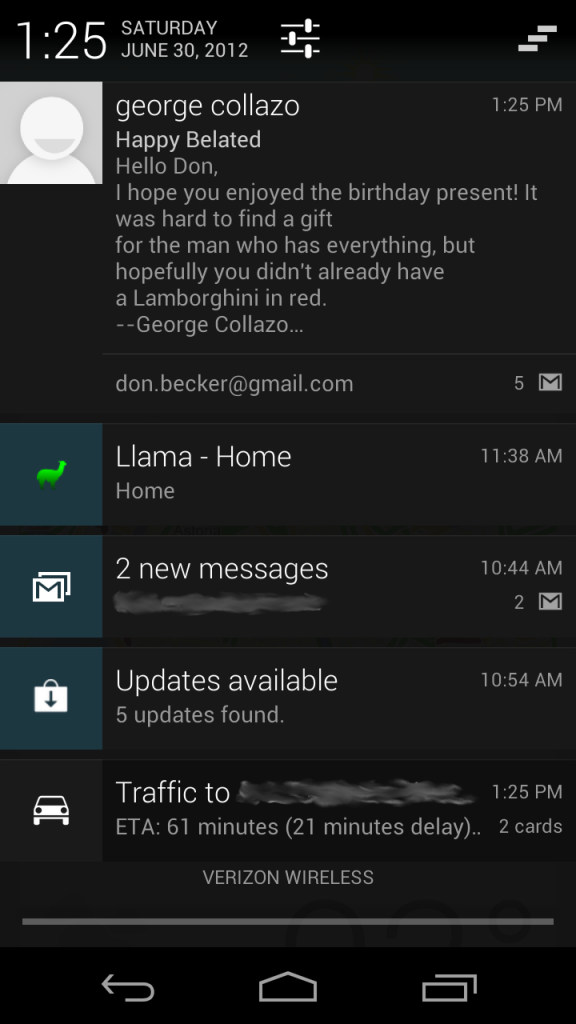 Expandable Notifications: Right now, in ICS and older versions of Android, pull-down notifications are fairly static. You see the app icon and a brief description of the message. For Gmail, it’s the sender and subject, nothing more. For a missed call, it’s just the phone number and the contact icon. Now the notifications are a bit more informative. Swipe down with two fingers on an e-mail notification and you get the first few lines of the message, or a full list of inbox messages if more than one message awaits. The missed call notification includes buttons to call the person back or send a text. Google Voice includes a brief transcription of voice mails. Screenshots include a “Share” button and a small preview of what you’ve just saved. It saves a click or two, which means I can shut my screen off that much quicker.

Google Now: Equal parts Siri clone and search aggregator, this is the crown jewel of Jellybean. Swipe up from the home button (at least on the Galaxy Nexus) and you’re presented with cards for local weather, sports scores, traffic between your current location and home or work or play, transit schedules, etc. It isn’t entirely perfect, mind you. Since it works off your Google search history, it will often present traffic cards for any address you’ve searched for recently (like, say, the apartment my friend is trying to sell, the location of which I checked out of curiosity). Weather is persistent, but sports scores aren’t. I haven’t played around with it enough to get a feel for the transit schedules it offers, especially since I tend to drive everywhere. There is serious potential here (Phil Nickinson of Android Central has already tagged it as a potential home screen replacement) and, while it all still feels a bit Big Brother-ish to me, I can only guess that as Google analyzes my movement patterns further the results will get better.

Improved Text-to-Speech Engine: I use my phone religiously as a navigation tool, so the somewhat robotic voice telling me “in one thousand feet <pause>, turn left on <pause> Main Street” is all too familiar. With Jellybean, the voice is a bit more natural in tone. It’s a minor tweak, but one that shows Google put some effort into improving the experience. Of course, now that the voice has changed I think my wife will have to come up with a new name for her…

Launcher Tweaks: Dropping shortcuts and widgets in one of the five launcher screens now allows you to rearrange items. Back in the day, if all my screens were full and I wanted to rearrange widgets, I had to delete one, then play Widget Sokoban in order to get everything the way I wanted it. This makes the process much easier. 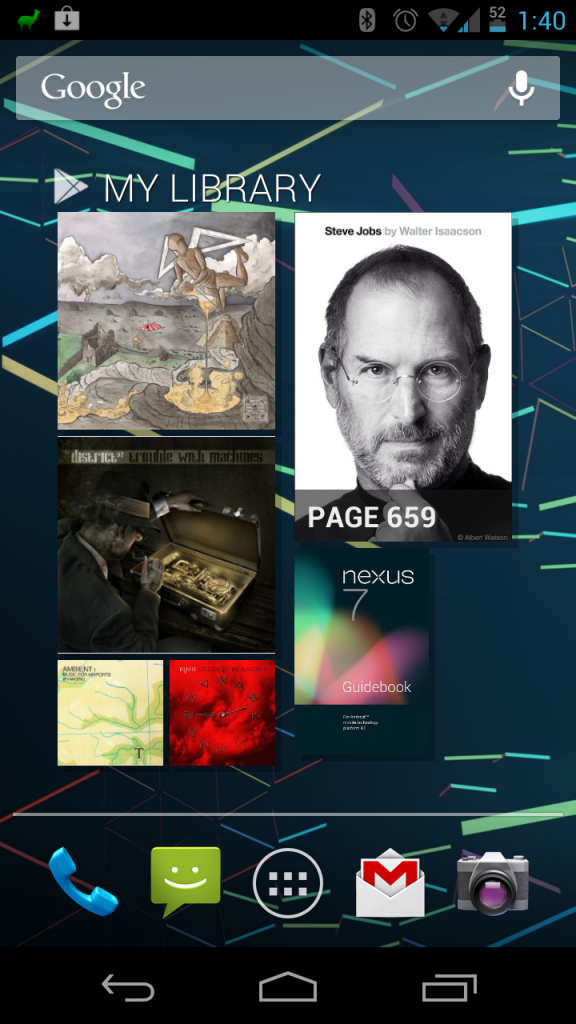 New Widgets: Since I made the move from HTC Sense to CM7 on my Incredible, I have bemoaned the spartan nature of the music widget. Title, artist, and previous/play/next buttons in a 4×1 rectangle. No cover art, no option to rate songs, nothing. Now, not only do I have that option with the 4×1 widget, I can use a full-screen widget to cover my entire Google Play Library. Music, books, movies, TV shows, and magazines (the later two are new additions announced at I/O) can be accessed simply by tapping the appropriate tile in the widget. In addition, Google seems to be taking aim at third-party apps by rolling out their own services. Google Now already includes sports scores and weather information as notifications (sometimes). Add to that Sound Search, a direct competitor to SoundHound and Shazam that will direct you to the Google Play Store to download whatever track you’ve asked about.

Smoother UI: Google made reference to “Project Butter,” a plan to smooth out the user experience in Jellybean, and it has worked. Transitions, such as on application launch, are more abundant and are slick. Fonts are sharper. It isn’t a massive overhaul of the UI, mind you, but minor tweaks that, to be fair, seem to have been drawn from Windows Mobile, especially the reliance on tiles in the My Library widget I mentioned above.

Google Play Music Improvements: Finally, gapless playback! Segues between tracks and live albums were always a pain to listen to. I’m surprised it took them this long to implement this, to be honest. In a similar vein, the app now includes a playback queue, bringing the app more in line with power user audio apps like PowerAmp and Winamp. Also included are playback controls that are clearly intended to allow playback through the NexusQ, which Google unveiled during I/O as well.

Unfortunately, at this point, Jellybean isn’t quite a daily driver for me. I don’t know if the issues I’ve had with network connectivity and GPS are a result of Jellybean still being in beta or the SDK version not having everything needed for phone use, but issues are there that have required reboots to fix. I was willing to live with some of it, but the kicker for me was when my Bluetooth headphones, which work great under ICS, crapped out on me entirely during the 5M race I ran last Saturday. It was bad enough I was running in 90º heat, but did I really have to do it without music? At any rate, I expect these issues to be fixed by Google (most devs right now are more concerned with cosmetic enhancements like porting Beats Audio to JB) and I expect Jellybean to be released by mid-July as Google announced, ready to be put through its paces in the intended manner.

Of course, considering how few phones have ICS at this point, Google is getting raked over the coals for pushing an update barely nine months after ICS was pushed to developers. And while a lot of these holdups are the carriers’ fault, both for withholding ICS updates or opting not to support it on older hardware, it doesn’t change the fact that 65% of all Android devices will soon be two versions behind. Here’s hoping the move from ICS to JB doesn’t take nearly as long as the move from Gingerbread to ICS.

@UnwinnableDonB flipped back to ICS on Saturday, so Twitter works again, too.

The Virtual Road of the HoloLens

Statistics are Making Us Into Assholes: A Modest Proposal to Reform League of Legends
Previous Post