I’m on vacation in Myrtle Beach, South Carolina. I’m standing in front of a full-length mirror in the condo my parents rented for the week. It’s late October, 2009 – over the course of the week, it will feel like I’m the only tourist in town who doesn’t qualify for AARP membership. I’m surprised by the amount of blonde hair in my mustache and beard. In my apartment at home, the lights aren’t this bright and I can only see myself from the shoulders up, so having visual confirmation of what the waist of my jeans has been telling me for months is kind of jarring. I don’t remember being this pasty and hairy and lumpy.

I put on a shirt. 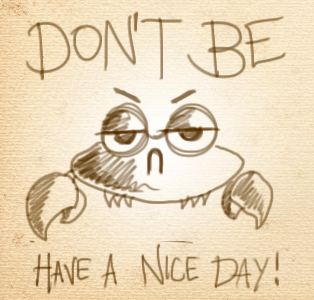 The extra weight around my midsection is not just an increased risk of several health conditions; I see it as evidence that my mind has settled a bit over the past year. No more periods of suppressed appetite (the unappealing nature of seafood, so prevalent on this trip, notwithstanding).

We’re staying in a timeshare. Most of my childhood beach trips (first to the Jersey shore, then later the Outer Banks) were spent in condos like this. When I was younger, my brothers and I would search through coffee tables, drawers, closets – looking for things the owners had left for us. We were motivated by the memory of an early trip where this exploration yielded a stack of board games.

Nothing great to be found here – a People magazine special on iCarly, some Nicholas Sparks books. The condo is decorated after the T.G.I. Friday’s fashion, with the faux antiques and signs all beach-themed. There are lots of puns involving the word crabby.

The building is relatively recent – it’s seven or eight floors tall, beachfront. Nestled between two RV parks/campgrounds. It looks more than a little out of place – which is saying something, considering much of the architecture of this area is built around giant concrete pirate ships and volcanoes and pyramids and sharks.

It’s what some might consider trashy: it’s amazing and tacky and desperate and full of hope and wonder. Everywhere you look, reach exceeds grasp. In the off-season, everything looks bleak – there aren’t people around. The paint is faded and flaking. The mini golf courses are empty.

Cruising down 17 with my parents – they’re hunting for bargain hoodies, I’m looking for sandals. We stop at a store having a clearance sale and I have hope. I find sandals with the logos of licensed “import” beers like Guinness and Corona – drinks of the partying and slightly moneyed youth. I lose hope. 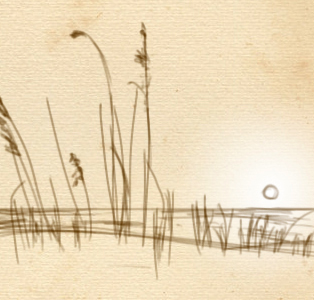 awk briefly at a beach towel with an image of Bob Marley and a lion’s head back to back like Janus (Jah-nus?) and the assortment of weapons in a display case: knives and brass knuckles of varying design and licenses (Batman is a registered trademark of DC Comics) and tasers and halberds.

There are aisles of rows of mass-produced tchotchkes with Myrtle Beach painted on in felt tip pen. Arbitrary souvenirs that have no meaning except when they are in a context hundreds of miles away and are ascribed a symbolic importance as detached from the day-to-day experience of the vacation as the vacation is from the day-to-day. Most people are not so pompous as to commemorate their trip with a thousand words.

For the majority of the vacation, I keep to myself. I interact primarily with wait staff. They notice my accent, ask where I am from. Depending on the size of the restaurant and its proximity to a major highway, you’re likely to find many transplants. As you get further from the main drag, the accents of staff and customer get thicker, blend together and become more consistent. The restaurant owners start looking more and more like Paula Deen and you start to realize just how much of an archetype she is. Your waitress brings you hush puppies and honey butter and sweet tea and smiles at you from behind her exaggerated Kate Gosselin spiky hair and lopsided bangs-do, destroying your Yankee snobbery with Southern charm and deep fried cornbread.

And you eat. And it is good.

This piece originally appeared on Brian’s personal site, Don’t Kick Food. Illustrations are by Chris Martinez. Follow them both on Twitter @BrianMTaylor and @DrakeLake respectively.