Of the four issues published, Avengers vs. X-Men #4 is by far the best. John Romita does some of his best work of the series, and Jonathan Hickman finds a humor to his storytelling that humanizes the characters and creates a bit of needed levity. While we’re still waiting for Hope to engage with the Phoenix force, having a few quiet moments between characters really helped me getter a better appreciation for this story.

The majority of the issue is spent on Wolverine and Hope. After Wolverine was tossed somewhere across the planet and Hope was on the run, both meet up in the Arctic. The six pages dedicated to their role in the story are the best part of the issue, and Hickman writes the characters perfectly. For example, Hope lures Logan (who is wearing the skin of a polar bear to stay warm) to her by dropping cans of beer in the snow. When Logan finds them, she tells him that if he’ll give her one minute to explain, she’ll give him more, unfrozen beer. A beat later, Logan says, “One minute.” 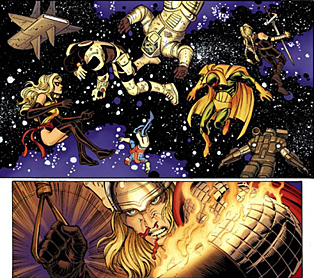 What’s surprising about the story is the way Tony Stark is utilized. He fills the role of a surprisingly absent Reed Richards. Reed is normally the inventor, but here Tony is the one looking for a way to develop a weapon that will help them. I like watching Tony be the inventor because we’ve seen it so much in the movies (most recently in Marvel’s brilliant Avengers film).

The art, too, is much better in this issue. Save for a few odd illustrations involving Colossus’ head, I thought Romita’s pencil work is much less blocky than normal. Action sequences are finely illustrated, particularly the pages involving Wolverine. There’s an image of him shadowed and dripping blood that is just fantastic.

My only complaint is that this issue feels like it’s completely out of continuity. I know coordinating all of these characters into one big event is difficult, but it’s bothersome to read about Psylocke and Angel as a team, knowing that in Uncanny X-Force, Warren doesn’t even know who Betsy is. There’s also seeing Spider-Man in the middle of a fight, when he’s supposed to be stopping Doctor Octopus in the Amazing Spider-Man “Ends of the Earth” arc.

In the end, I just want Hope to bond with the damn Phoenix already. The buildup has been a bit burdensome, but an issue like this – one that goes back to the characters – makes the series stronger and definitely has me excited for the next issue. 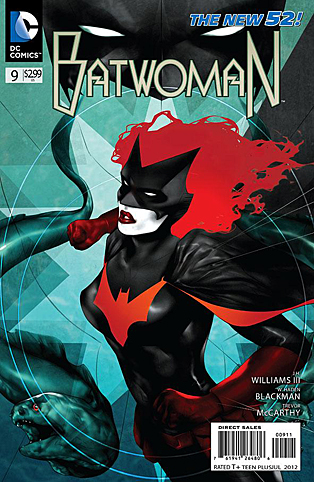 While I want to see an end to this arc involving a spirit woman who floods people’s mouths with her tears, I can’t praise the writers and artists of this book enough. Of all the New 52 books, Batwoman is a premier title that should be on comic fans’ pull list every month.

J.H. Williams and W. Haden Blackman craft an intricate story in this issue. While it bounces back in forth in time, never once did I feel lost. Each character is given a bit of face time in order to explain how he or she came to be involved in the climactic moments of the comic. Each moment is short but well written, and in addition to setting up the finale, they help develop each of the characters. It’s hard to explain without giving the plot away, but Williams and Blackman move between the intertwined tales fluidly so that readers can see the strong connection.

As usual, the book is beautiful. Trevor McCarthy is responsible for the drawings, but much like Williams, he uses different styles for different sections. This is also why a book that bounces back and forth in time is so cohesive. Visually, the style of each moment is varied so readers can differentiate. Many of the pages involve a circular movement rather than a traditional panel construction. I have to credit Todd Klein for his lettering work, which help the eyes transition smoothly from moment to moment.

Guy Major also deserves a nod for his colors. Given that McCarthy can change his style so easily, Klein is able to add the perfect colors to the costumes of the characters. In the moments where the comic calls for muted coloring, Major delivers, as he does with those moments that require a more artistic touch.

If nothing else, Batwoman is a work of art. I can’t stress how beautiful this comic is to read, and how continuously the visuals engage. Even though Williams stepped away from the art duties, DC has still filled the comic with unbelievable talent. From the panel design, to the storytelling flow, to the illustrations and imagery, this comic sets the bar incredibly high for its artists. And it’s got a good story to boot. 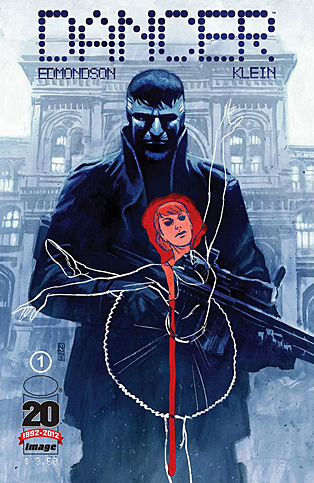 Bannen’s Book of the Week: Lately, Image comics has been introducing a plethora of new comics. Taking a chance on a new comic is always a risk, but with Image’s track record as of late, I felt pretty confident shelling out the $3.50 for Dancer. Turns out, it was money well spent.

Nathan Edmondson wastes no time telling his story. While the comic has a prologue that introduces the concept of a dangerous assassin, Edmondson just as quickly changes gears to introduce his protagonist, the mysterious Alan Fisher and his ballet dancer girlfriend, Quinn. The majority of the issue is Alan trying to run away from an assassin’s bullet, but Edmondson is still able to find time to develop his characters. Most of his characterization occurs on a subway car, and this helps add an element of anxiety and intensity to the conversation. In one page, Edmondson is able to give Alan a rich history and make Quinn a devoted, yet skeptical, partner.

The final moments of the issue are the true sell of the mystery. Alan is able to see his attacker, and the results are nothing I could have predicted. They add an element of weirdness to an already fast-paced story and offer readers a reason to want to come back to the next issue.

Nic Klein illustrates the book in a textured format I’ve seen before in comics like Grant Morrison’s Joe the Barbarian and Joe Hill’s The Cape. Each panel is layered with detail, and Klein’s roughly-drawn characters are perfectly illustrated for the dark subject matter. Characters are heavily shaded to create gritty imagery for the comic. Additionally, Klein will occasionally play out the story in several quick panels. One page in particular reminded me of Dave Gibbons’ panel construction in Watchmen – nine boxes on a page to create fluidity of movement. The comic is never visually tedious.

I enjoyed Dancer a lot more than I thought I would. The assassin plot has been done, but with the strange twist at the end, Edmondson has opened the door to a very strange world that I look forward to exploring. Lately, Image has been hitting out of the park with its comics. The stories they’ve told have been unique and interesting, and the art has been stellar. And Dancer is another great example of this.