During Unwinnable’s “Love Week,” I had written about homosexuality in comic books and how, for some reason, the media seems to pay a lot more attention to it. More recently, Alan Scott, the original Green Lantern, was revealed as a gay character in the James Robinson-penned Earth 2. So it seemed serendipitous that in the days following my article, “I Want My Stormwatch Love, Dammit!,” I received a message asking if I would like to review a book about a gay superhero team. Written by Martin Eden, Spandex: Fast and Hard tells the story of a group of gay superheroes. At first glance, it’s a book of clichès about gay people. The team members have names like Diva, Glitter, Mr. Muscles and Butch. But over the course of the three issues presented in this graphic novel, Martin Eden is able to communicate heartfelt emotions like desolation and sadness. The art also gets better with each page and by the end, Eden has developed a strong base for the future of his world, while establishing a group of heroes who not only embrace their homosexuality, but display confidence in their being. 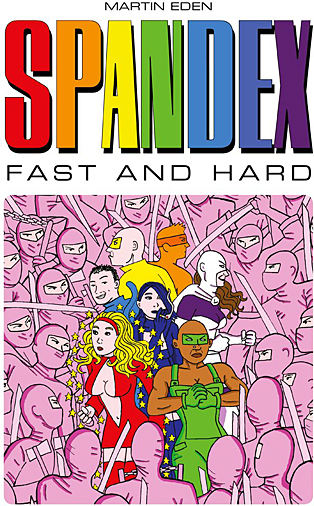 I’ll be upfront: Spandex is not a book for young adults. Much like Garth Ennis’ The Boys, Spandex has graphic violence, sexuality and nudity. The characters are adults and therefore are involved in adult situations. From the opening moments, when the 50-foot lesbian attacks England’s shoreline, readers know they’re not in for standard superhero fare. And the three issues presented here are only connected by characters. Plot lines are not really carried through from one to the other, as Eden was obviously feeling his way through the story. But the organic process makes for an organic story that finds its feet by the end of its initial run.

As the story goes on, the humor becomes less and less and the conflict becomes greater and greater. A serious tone overwhelms the story that follows the initial lighthearted introduction, and by the third issue, readers are thrown into a bleak world where a supervillain is making people relive their most horrific moments. In the end, the thing that saves the heroes is their unwillingness to give up. The parallels between the heroes of Spandex and the uncertain world in which many gay people must live is not lost on me. By the end of the graphic novel, Eden has established his cast as well as given them very palpable life, so that future story lines do not need the same kind of introduction. In fact, after spending some pretty intense emotional time with the characters, I’d be excited to see where Eden takes them from here. 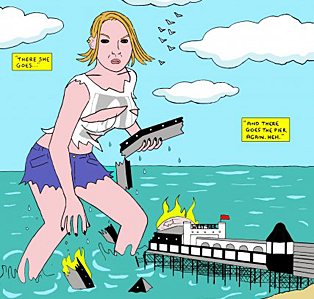 In my initial reading, I was thrown by the art. It’s simple and cartoonish. But over time, Eden’s illustrations get better. His characters are given more definition, and the colorization brings vibrancy to the visuals. It also helps with the more humorous aspects of the book, like the heroes’ costumes, and my favorite – the pink ninjas. Eden also packs quite a bit into each panel, and the flow of the imagery is never lost due to the fluid construction of the pages.

In the third book, Eden does his best work. Panels are grayed to convey the lifelessness of the world when the group is split apart. The detail with which Eden crafts the final pages of the book is an indicator of his abilities as an artist. One scene between two members is so heavily shaded that it takes on a noir look, and in this moment readers can see that Martin Eden is more talented than he originally lets on.

Spandex: Fast and Hard starts out as a silly story about gay superheroes but becomes a tale about pride – in oneself and in one’s friends. Martin Eden is able to relay the emotions gay people must feel before they come out. Will their parents still love them? Will their friends still care for them? Will they ever be accepted for who they truly are? In addressing these concerns, Eden’s message is heartfelt. And Spandex is a small step towards what one hopes is an inevitable acceptance of homosexuality in our world.

The Aesthetic Failure of Okami

Minecraft and the Ends of Things