I wrote a few weeks ago about the glory of building short, five-second videogames in WarioWare D.I.Y., but I didn’t describe what makes playing those games so fun. In the WarioWare series, the goal is to play as many games as possible without failing any. Each game is about five to ten seconds long (but they get faster and shorter as you progress), and you quickly have to comprehend just what game you are playing, what you need to do and then do it. Even after you are familiar with all of the games that could appear, figuring out which one has appeared this time can take precious seconds. Realizing what game you are playing as quickly as possible is half the challenge.

Chris Burt-Brown’s Mini Mix Mayhem takes WarioWare’s idea of frantic management and comprehension and multiplies it in the most absurdly ham-fisted way: by having you play up to four different games at the same time. The screen is split into four mini-screens, and on each of these screens plays randomly selected mini-games. Each by itself reflects a well-established iOS control style – tapping, swiping, holding, tilting, shaking, dragging – and a conventional game type – word puzzle, space shooter, gem puzzle. 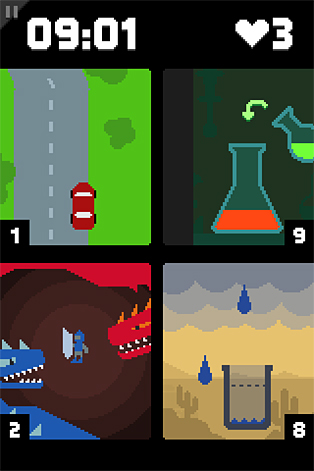 Each game by itself is easy to comprehend and easy to master, but when you are trying to play four different games simultaneously, the challenge quickly stacks up. You might be swiping in this corner to unscrew a bolt while holding onto a man in that corner to save him from a pit of lava while you’re shaking the whole device to sink a castle into a swamp. Then, since you still have to keep the man out of the lava for another five seconds, you have to twist your other arm around uncannily to steer a car on a racetrack. And then you have to tilt the device to tip over a pillar, but you have no fingers left, so you lift your leg and tilt your entire body.

It makes you yell – at the game, the device or your own limbs (you can never quite tell). “No!”, “Not yet!”, “Argh!”, “What? I thought I was done with that one!”, “Wait, when did that game start?”, “No! Slow down!” And then you laugh because it is all just so absurd, and what else can you really do but laugh?

You start the Mini Mix Mayhem with ten lives, and 1-ups are hidden within the mini-games but require a keen eye to find. Or any eye, really, since you spend so little time looking at each game and mostly rely on peripheral vision. The game (the meta-game, that is) is about surviving as long as possible, while you lose a life for each mini-game failed. It’s a weird choice of system. Scoring players on how many games they successfully completed seems like it would have been a more positive form of feedback then than telling them how long they survived before inevitably failing. Or, at the least, it would have been nice to know both how long you survived and how many games you successfully completed. Regardless, the core sensation of having to frantically struggle with as many games as possible for as long as possible is sound.

Several single-device multiplayer modes exist, too. The standard competitive two-player mode simply has each player manage two screens in a fight to survive the longest. It can be boring, as managing two screens really isn’t very difficult, but it does open up interesting play possibilities as you reach over the device or tilt it the wrong way to try to sabotage the other player’s games. Personally, I far prefer having two players cooperatively try to manage all four screens, where even trying to work together can make things complicated as fingers and hands get tangled together. For the iPad, there is also a party mode made for four or more players, where the screen is filled with twenty-two games that all have to be managed simultaneously for as long as possible.

What makes Mini Mix Mayhem most interesting is how it takes established iOS controls inputs – streamlined to be as simple and undemanding as possible on a device with no buttons – and complicates them to create an experience that draws attention to your whole body in relation to the device you are holding. It draws attention to the screen, to your fingers, arms and body. It’s like juggling and spinning plates while playing Twister. Ultimately, Mini Mix Mayhem is just playful.

Minecraft and the Ends of Things