I have a confession to make.

When I was an undergrad art student studying that vague thing called “writing,” I hated my literary criticism classes. I wanted to be an author. I wanted to make the works of art that other people sat around and spoke about. In one semester’s course on modern literature, much time was spent talking about what this or that text “meant.” As a writer, it really bugged me. I remember at one point thinking (and I recall this now with much embarrassment) that critics are simply people who sit around and talk about things because they aren’t any good at actually making things.

Several years before this, I had spent 18 months getting a game design degree before realizing I sucked at creating videogames. Now I am a videogame critic. Go figure. 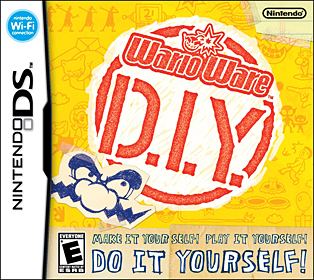 It’s probably no coincidence, then, that I no longer hold such a problematic view on the role of criticism. Nowadays, I know that both critic and creator have their own important contributions to make to the progression of any art form. But as I hang around developers at GDC parties or watch them converse on Twitter, I realize I’ve never quite gotten past that old hang-up: I suck at making videogames. And not just videogames – I suck at making content, too. I can’t make the simplest of interesting LittleBigPlanet levels. After hundreds of hours, I haven’t built a structure in Minecraft more impressive than a farmhouse with a loft (and let’s be honest, my girlfriend did most of the design work there). My only call to game-design fame is a tabletop mech game for which I wrote an entire rulebook in high school – but then I lost the rulebook.

It’s not that I feel like a fraud for talking about games when I suck at making them. I’m a writer, not a designer; I’ve come to terms with this. But it’s hard not to feel jealous, you know? Games are cool! You can do cool stuff with games! I want to make them, curse it!

WarioWare D.I.Y. is a game about making games. Simple, micro, 5-second games. It comes with a robust interface, development kit and tutorials so intuitive that anyone, including myself, can make something to be proud of. What Mario Paint is to painting, WarioWare D.I.Y. is to game design.

Its secret is that you can’t make “great” games so much as games that seem great compared to the rest of the game. The series has a reputation for short, absurd games. Every previous WarioWare has captured the central input device of its home console (be it the touchscreen, the Wiimote, the typical controller, etc.) and gone to town with it, throwing random minigame after random minigame at the player. They tend to be weird and wacky. You spend half of a game wondering, “What the heck is this?” and half the next game wondering, “No, really, what the heck was that?” It’s hilarious and playful and immature and glorious.

So when you have to make your own games in WarioWare D.I.Y., the bar for entry is already low. When you are making a platformer in LittleBigPlanet, you are inevitably comparing yourself to the countless masterfully-designed platformers out there. In Minecraft, your house is never as good as those on YouTube. In WarioWare D.I.Y., it is practically impossible to make a game weirder, sillier or more absurd than the minigames already packed on the cartridge.

So thanks to WarioWare D.I.Y., I have finally had the chance to create games that I am proud of. So proud, in fact, that I would love to share them with you. So without further ado, here are some of my masterpieces. You should feel free to take screenshots and stick them on your fridge. 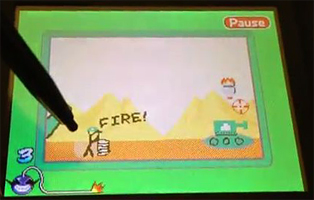 In Paratroopers, the player must quickly open the parachutes of three paratroopers that jump out of a plane. The exact timing of their jumps is partially randomized so that they don’t jump out at the same place each game. This keeps the game surprising and fresh, and helps to increase replayability. I’m particularly proud of how their arms flail around before the parachute opens and then they look all relieved as they drift towards the ground.

A simple game, this one. A whole heap of balls bounce around the screen, and the player must find and tap the red one before time runs out. It’s harder than it sounds, and I spent quite a bit of time tweaking the speed of the balls so that they could actually be tapped. I love the finishing flourish of all the non-red balls flying off the screen when you win.

Mario Count is a simple memory game. Four blocks have the numbers 1-4 on them. The player has a few seconds to look at them before the digits are replaced with question marks, and then must quickly tap them in the right order to win. At present, nothing happens if you click on the wrong box, but I’ve been considering making it so that if you tap the wrong box, a poisonous mushroom comes out of it and you lose the game. Note the intertextual nods to Super Mario Bros. with the different audiovisual cues.

In Fisherman, players must patiently wait for the fish to swim in front of the hook before they tap and pull them out of the sea. You only get one chance; it is a game of nerves and of timing. This game was quite a challenge for me to program. I couldn’t get the fish to turn out when it started swimming back the other way, and sometimes it would start swimming in the wrong direction. The solution was a whole heap of ‘if…then…” statements, but it still isn’t perfect – as the video shows. 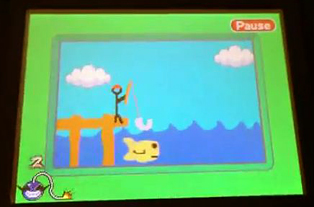 Perhaps typically, the game I am most proud of making is a military shooter. You must use a single artillery shell to protect a tank from a falling bomb. It requires careful timing and immaculate precision to hit the slow-moving bomb with the slow-moving shell. I love the visual aesthetic of this game. I spent quite some time prototyping the mechanics with stand-in art before I produced my own. Then I added the spotter and his dialogue to communicate the win state to the player (though, looking at this video, I see it is a bit buggy still). And check out the particle effects of those explosions! The polish I have worked into this game is something I am incredibly proud of, not even ironically.

Okay. This isn’t a game, but something I made while playing around in the game’s music editor. See, I’m even worse at producing music than I am at producing games. So when I took this song from Yoshi’s Island, stuck it into the music editor and replaced the notes with random kung fu shouts, I was pretty stoked at what I had created. With a bit of clever remixing I produced what I’m sure you will agree is the greatest song of 2012. I’m now considering a Kung Fu Yoshi game in which I could use this music. Expect an announcement at E3.

So, finally, I have created some games to be proud of. When I play WarioWare D.I.Y now, I put the game on shuffle so that all the built-in games, all the games I have downloaded from other player-developers and all my own games come together in a randomized playlist. My own games of Artillery and Fisherman pop up alongside those made by professional developers at Nintendo, and each are as rough and absurd as the other. Not only have I “just made something” as many developers insist everyone and anyone should do, I have made something that is now integral to my playing of this game. WarioWare D.I.Y. assures me that my own creations are no less meaningful than those created by anyone else – they are meaningful explicitly because I created them. It’s something I’ve never been able to do before, and it feels pretty special.

The App Hole: The Death Of Unlimited Data

The Dusty Hoard – The Batman Adventures