I like a good deal of violence in my games. I like it dramatic and frequent and unflinching. The splatters of red in these greybrown worlds are a constant reminder that I am doing well, a reward for good work. On occasion, I enjoy a good suicidal rampage – high body counts in the face of overwhelming odds keep me limber. 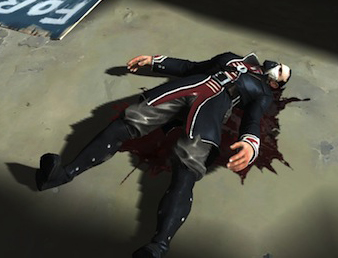 There was plenty of violence on display at E3 2012. It ranged from the cartoony (Mark of the Ninja) to the emotional (Tomb Raider) to the realistic (The Last of Us), but none could match the virtuosity of Dishonored.

In the late 18th century, there was a violinist named Niccolo Paganini. He was the very epitome of the wunderkind, able to play with such ferocity and to elicit such sounds from his instrument as to be accused of having sold his soul to the devil in exchange for his talents (his reputation as a rake did nothing but enhance that legend). Above all, Paganini was an undisputed master of the variation: a formal musical technique in which a theme is played repeatedly in different forms, usually by way of harmony, rhythm, melody and counterpoint, or combinations thereof.

These notions of themes and variations, of frenzy and diabolism, this is what I think of when I recall Dishonored.

Set in a steampunk city run on whale oil, you are Corvo, a disgraced guard of the empress turned assassin, taking your revenge on the lords and ladies who brought you low. This plays out in a series of crafted missions that invite the use of an impressive suite of gadgets and supernatural powers. Shall I summon a gust of wind to knock that guard over the ledge? Perhaps he deserves to be eaten by a swarm of rats, instead. Or better yet, I can blink over to him and stab him in the neck. It’s always better with a splash of claret.

There are no shortage of throats that need slitting in Dishonored, so it is good luck that powers seem able to be leveraged in unusual ways and combinations. I am keen to test the limits of Corvo’s ability to stop time. Or possess living creatures.

When things turn from tactical stealth to full-on combat, the game turns into a Cuisinart of swords and daggers, with the occasional – if cumbersome – flintlock thrown in for good measure. It does not look easy to take on a room full of guards in first-person swordplay, but it does look exhilarating.

If the E3 demo of Dishonored is the solo, I cannot wait for the whole symphony.

Dishonored was developed by Arkane Studio for Bethesda Softworks, and will hit stores October 9, 2012. Stu also enjoyed Assassin’s Creed III, The Unfinished Swan, Mark of the Ninja and, surprisingly, Borderlands 2.

Game On at the Metropolitan Museum of Art
Previous Post