When the asynchronous revolution came, I was the first on board. Though it was, admittedly, more of a trickle than a revolution, I bought in completely to the idea of a multiplayer game that could be played at my own convenience. It didn’t need an appointment or my undivided attention; it just required a few seconds of my day. The trend was relegated to my Xbox at first – I would race against my friend’s times in Burnout: Paradise. I found my play-time delightfully redirected from racing random online enemies to a constant competition against the few friends of mine that owned the game.

Then came Words with Friends, a smartly inevitable idea that made Scrabble something we could play with whomever we wanted – kind of like chess by mail, except that it was instantly delivered, took a minimal amount of effort to participate in – and wasn’t chess.

I never liked Scrabble. Sitting across from my equally intelligent opponent was too much pressure and, because I could always spend more time to come up with a better word, there was never enough time to do my best. Every single turn, I had to settle for less than my best play, simply because the person across from me was growing impatient.

Little do they know, I’m spending hours trying to come up with the perfect word from my seven random letters.

Words with Friends gave me the ability to spend as much time as I wanted agonizing over different letter combinations, even trying them out to see if some random string of letters might somehow be a winning word. In the meantime, my friend assumes I must be busy. Little do they know, I’m spending hours trying to come up with the perfect word from my seven random letters.

I quit in disgust, leaving the rest of you to your own devices. I hope you had fun.

But the asynchronous revolution was just getting started. Next was Carcassonne, a popular board game that was smartly ported to be an asynchronous iPhone game. It was extremely well executed and, more importantly, allowed for more than two players to play at once, providing a buffer between the moment you take your turn and the moment you are notified that the next person has taken their turn (and is now impatiently waiting for you to take yet another turn).

If I’m honest, that’s the moment that most epitomizes the asynchronous multiplayer game for me. Once the trend went beyond the dedicated gaming console and applied to a device that I use every day for all sorts of things and have with me all the time, it became a constant demand on my time and attention. I would take my turn, feel accomplished for 10 minutes and then hear that sickening notification sound yet again. And I knew: I was going to have to just ignore it. 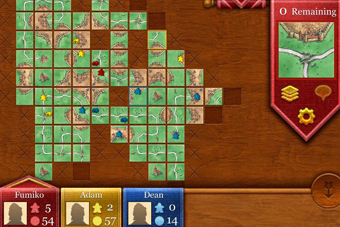 I have an active imagination when it comes to what other people might be feeling about things. I spent every spare minute ignoring these notifications, but unable to ignore my imagined friends, sitting in their dark room with their arms crossed, watching the clock and waiting for their phone to notify them of my turn. Sometimes those friends would reinforce my worries, asking me when I was going to take my turn through a Twitter @reply (a kind of unfortunate public shame that it takes days to cleanse oneself of), a Facebook message or in person.

That problem was curbed just a bit with Carcassonne allowing more than one other player. Now I could blame the delay on someone else. Unless, of course, both players now felt frustrated at me at the same time. And, yes, that is what I imagined. And that is what often happened.

Because, look, let’s be honest: I don’t ride the subway, I don’t do a lot of loitering or waiting in lines and I have a lot of other games and reading material on my iPhone. It’s all I can do to keep up with Twitter. When I go to my iPhone, it’s almost always with a specific purpose: to play a specific game, to catch up on Twitter, to do some bite-sized reading. More and more I’m just learning to ignore that notification for a while, even when I find myself unable to ignore the visions in my head of my friends gnashing their teeth in the asynchronous darkness.

Still, I find myself instantly buying almost any game with decent asynchronous capabilities, and begging my friends to invite me to a game. Not because I am addicted to games, but because I am addicted to connection. If I read some Twitter buddies or Facebook friends discussing their asynchronous victories and defeats, it’s impossible to suppress the need to fit in. All I really want is to be one of you.