Quantum is a first-person action game designed by Kim Swift, best known for her role as lead designer on Portal. The game follows the story of a 12-year-old boy off to visit his scientist uncle, Professor Fitz Quadwrangle. The professor, though unseen in the E3 demo, seems to be the embodiment of several famous mad scientists – Doctor Emmet Brown, Professor Membrane and Doctor Fred Edison. 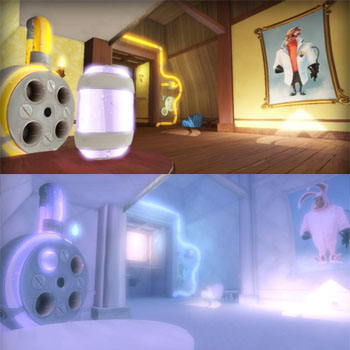 One of my favorite aspects of the game is its cartoon feel. Throughout the professor’s house are humorous paintings of family portraits, cats and landscapes – all these little things lend a sense of childlike fun and humor to the game. It seems to avoid the darker tone of Swift’s previous environmental puzzle games.

The game begins when an ill-fated experiment at Professor Quadwrangle’s house goes wrong just as our young protagonist arrives. He enters to find that the professor has disappeared and is lost somewhere in the home (it is, apparently, bigger on the inside). You are left with only the help of your uncle’s disembodied voice and a little imp named Ike to assist you in using the main tool of the game, the Inter-Dimensional Shift Device (IDS) which can manipulate the world’s physical traits, like speed of time and gravity.

The player first encounters the Fluffy Dimension, where everything looks like quilted Charmin toilet paper. The world becomes soft and white, sort of like Michael McDonald or David Guetta. In this new environment, heavy objects like couches and safes become light as air and are easily moved around the room while the effect is turned on. Eventually, the player has to start using the different dimensional effects together, rapidly combining them to create different results. Bringing these resources to the puzzle environment is how the brain work really starts to kick in.

Despite some obvious similarities to the Portal games, Quantum has its own voice and sense of style. It doesn’t forget its cartoonish roots, even in the later levels on display in the demo – here, there are iron safes instead of weighted storage cubes and the dangerous liquid moat you have to avoid is called Science Juice rather than acid.

Quantum Conundrum was shown in a small booth with its own theater within the confines of the much larger Square Enix booth. There was a giant screen facing out to everyone that passed by showing trailers for many of their games, these trailers looped forever. Recently, Square Enix came under some scrutiny due the content of the recently released Hitman: Absolution trailer. Due to that fact, the trailer was not shown at E3. However, Square Enix did show the trailer for the game Sleeping Dogs, in which, at one point, the word motherfucker becomes clearly audible to anyone within earshot of the THX theater-quality sound.

While sitting in the Quantum Conundrum theater watching the demo, I could still hear the violence and shouting just outside the door. Even Disney’s Epic Mickey 2 has violence in it. It was nice to see something that looked like a cartoon and actually felt like a cartoon.

Games are for kids, right? So let’s go on a kid adventure.

Quantum Conundrum will be available for digital download on PC this June 21 and released on PlayStation 3 and Xbox 360 later in the summer. Other games that caught Chuck’s attention at E3 2012 were Assassin’s Creed 3, Star Trek, Dishonored and Sleeping Dogs.