I have a love/hate relationship with E3. On the one hand, it’s fun to see and try out new games I’m interested in or curious about and there are (usually) a few surprises coming out of the show that are worth at least a modicum of excitement. At the same time, E3 can be, and often is, obnoxiously bloated and corporate. The cynic in me sees it as a kaleidoscopic whirlwind of glitz and hype from all manner of peddlers in business suits, flanked by attractive women with ostentatious displays of tanks and dragons and sports cars all designed to get you to buy in to the same game you bought last year.

When everyone is parading and cavorting around the show floor and journalists are seen repeatedly whooping over yet another neck-stabbing stealth action quicktime open-ended bullshit-a-thon, it can be hard to get excited for anything (Seriously guys, cheering in the press box is really embarrassing. Have some pride.). This was my fourth year at E3, so I had no illusions about what I was in for. And for as much as the spectacle of the show is what it is, there were still a few games I was genuinely excited to play. Sadly, that quickly dissipated when the two most anticipated titles I was scheduled to see, Metal Gear Rising Revengeance and Tomb Raider, both left me a little underwhelmed for one reason or another. (I do take it all with a grain of salt, because it’s impossible to judge a game based on an E3 demo.)

E3 is a kaleidoscopic whirlwind of glitz and hype from all manner of peddlers in business suits.

Nevertheless my game of the show was either DLC for an old game Unwinnable readers may already well know my opinions on (Dark Souls) or the game I had predicted would be my game of the show already, Naughty Dog’s The Last of Us. Far from the pulpy shenanigans of Nathan Drake, The Last of Us is a new direction for Naughty Dog, in which they’re applying their writing chops to a mature story that’s closer to something like The Road or 28 Days Later. Yes, this is a post-apocalypse theme, but if anyone can make it work, it’s the creators of Uncharted.

Full disclaimer: with all my appointments booked in advance by editors at my primary outlet for the show, I didn’t have time for a behind-closed-doors look at The Last of Us – so I’m going to keep my thoughts on it brief.

From the gameplay I have seen – more or less a softer version of what was being shown in Sony’s screenings – it looks like everything Ubisoft’s I Am Alive should have been. The game’s two leads, a gruff middle-aged man named Joel and Ellie, a teenage girl, encounter gangs of survivors who have turned to murder in their desperation, seeking survival in the ruins of an urban wasteland. Joel and Ellie have to do what it takes to stay alive as well, and, importantly, the impact of confrontation feels incredibly uncomfortable.

In fact, the savagery of The Last of Us’ violence made me cringe a little, tensing up in the same way I do watching battle sequences in Game of Thrones. In one scene, Joel sneaks up on a bandit in an abandoned hotel, brutally smashing his face into the corner of a desk in seconds; Ellie also throws a brick at someone, so I imagine that can be used as a weapon as well. Later, after Joel quickly fashions and tosses a homemade Molotov at another foe, Ellie is visibly unnerved 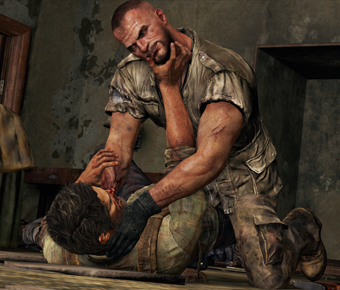 . When a third thug begs for his life staring down the barrel of a shotgun, bone, brains and viscera splatter all over the floor while blood pools realistically—or so I’m told. It all seems a far cry from the pop-off, near bloodless deaths of Uncharted.

If this were approached in the same way, as, say, the knife-twisting quicktime action as seen in the new Splinter Cell (i.e., played to whooping journalists) I wouldn’t find it interesting in the slightest. Yet Naughty Dog seems to be focusing on the realism of such psychological horror, like the developers actually want the players to have an intense negative reaction from getting their hands dirty.

I get the impression that The Last of Us doesn’t want to cheapen its violence at all – enemies may run screaming if they learn you’re armed, though they could just as easily yell your position to anyone that’s around. You can also down someone with a single shot, and it doesn’t seem that you can take much damage, either. You almost forget that game’s calamity is a host-infecting fungus inspired by the “zombie ant” spore famously found in South American rainforests.

I don’t know whether or not Naughty Dog intends to fully explore the interpersonal and psychological fallout of such violence, and I shouldn’t be surprised, given the studio’s talents, that The Last of Us looks as fascinating, and disturbing, as it does. (Runner up goes to Far Cry 3’s meta-commentary on shooter design, which I didn’t find out about until it was too late.) With games like Watch Dogs taking high concept conceits and seemingly dulling them down – at least based on what was shown in the demo – to (admittedly gorgeous) action scenes using cover and actions from a skill wheel, it’s nice to know that some companies appear to be embracing new ideas as we’re pushed towards what may inevitably be the next generation’s same old thing.

The Last of Us was developed by Naughty Dog for Sony Computer Entertainment and will hit stores in early 2013. Steve Haske also wanted to see Far Cry 3, The Unfinished Swan, Soul Sacrifice and Tokyo Jungle but was too busy with other assignments. Follow him on Twitter @afraidtomerge.