Most of us alive in 2012 are better at looking than listening. Our culture is so overwhelmingly visual that a live disembodied voice might come as a shock, unmoored from the comforting corporeal reality of the body from which it emanates. But that was exactly what I wanted when I saw RadioTheatre’s Third H.P. Lovecraft Festival, currently running at the Kraine Theater; to give my eyes a rest and experience the show’s visceral pleasures, no visuals necessary.

It’s not that performers R. Patrick Alberty, Kevin Gilligan, and Frank Zilinyi (who also directed) aren’t fun to watch. Their faces, lit to varying degrees and hovering above the podiums behind which each actor stands, are terrifically expressive as they register fear, skepticism, fascination and of course, terror. There isn’t much call for happy expressions in the stories of horror luminary H.P. Lovecraft, whose way with madmen and monsters became a staple of magazines such as “Weird Tales” in the 1920s and ’30s, and gave the genre the basic shape we still recognize today. 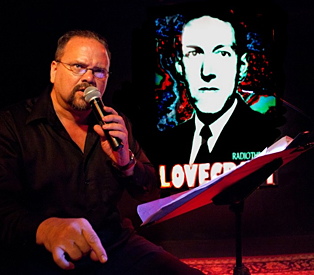 For those unfamiliar with RadioTheatre’s work, the visuals are pretty minimal to begin with. The company presents adaptations of stories tending toward the monstrous and otherworldly, in the general style of the days before television, when dramas only heard and not seen drifted over the airwaves, still a staple of the American entertainment diet. The conceit is an indie theater masterstroke both pragmatic and artistic: it does away in one fell swoop with the need for sets, costumes, props, fight choreographers or elaborate lighting (though it does up the stakes considerably in the sound department). More importantly, it opens the door to an experience all too rare in the world we live in, one that is simultaneously shared and private – a chance to see a story unfold inside our minds while in the company of others.

The basic setup is this: Alberty, Gilligan, and Zilinyi stand onstage facing the audience, wearing dark clothes. Combined with the podiums, the overall effect comes close to that of three disembodied heads (Lovecraft would most certainly approve). Behind them is seated sound engineer Wes Shippee, mixmaster to the three thespian M.C.s, and above him and his elaborate setup hovers a poster-size portrait of Lovecraft, presiding over the evening like one of the dark cult idols worshipped by the characters in his stories (you practically expect his image to begin intoning one of his ominous sounding made-up languages before the night is out). A light-up sign in slightly retro curvilinear typeface tells us we’re in the land of RadioTheatre. After Zilinyi very briefly introduces each story (two on the night I went), the three performers launch into Lovecraft’s spooky text, talking into handheld mikes and alternating speakers as they take on specific characters and bits of narration.

First up on the night I attended (there are two programs of Lovecraft stories running in tandem) was a shorter work entitled “The Moon Bog.” Anyone who’s ever wondered what lurks in the heart of backyard ponds, swamps, or lakes may care to avoid this one. It opens with a man being questioned by investigators about a friend’s mysterious disappearance, then gradually wends its way back through the night in question as our survivor grasps for words to describe the unspeakable. As the central character and witness to the tale’s horrific events, Alberty gives a fantastically wrought performance. His features contort and his body quakes from the force of his imagination in conjuring the story’s events, as images of Native American goddesses and moonlit ritual-processions come to life through the expressive power of his voice.

The next story, Zilinyi announces matter-of-factly – if anything can sound matter-of-fact when uttered in Zilinyi’s mesmerizingly grizzly voice – was Lovecraft’s sole work to be published in book form during his lifetime. Dating from 1931, “The Shadow Over Innsmouth” seems inappropriately titled – it’s more like the shadow off Innsmouth, a coastal New England town that’s seen many of its residents die, disappear, or be conscribed to the sanatorium in nearby Arkham. The ones who remain have odd physical features, like bulging eyes, and deep creases on their necks. A smell of rotting fish pervades the streets, but despite adamant warnings, college archeology student Marcus (voiced by Gilligan) is driven there by curiosity. One of the few remaining old-timers (Zilinyi) reveals some of the town’s secrets, leading Marcus to some terrifying revelations, about himself, humanity’s collective past and – if the populace of Innsmouth has its way – our future.

All three performers are virtuosic in the use of their voices, evoking not just multiple accents and characters, screams of raw fear and quiet shudders, but also the poetry of Lovecraft’s descriptions (his career was jump-started when he penned a letter in verse to a pulp magazine). In giving voice to the “fantastic nightmare” of Lovecraft’s most heightened prose (to quote “The Shadow Over Innsmouth”), the actors’ voices soar and plummet, growl, whisper, and squeal, sometimes all in the same sentence. Zilinyi is especially impressive as the haunted Innsmouth townie, occasionally pealing into a deranged, high-pitched giggle. You’d never think this big, deep-voiced guy had it in him. 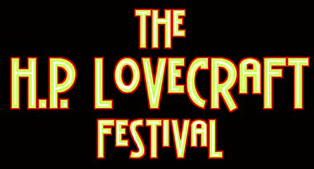 Dun-Daaaaaaaaah! The original orchestral music by Dan Bianchi – who also adapted the stories, did the sound design, and is the founder and general mastermind behind RadioTheatre – swoops in at just the right moments, enhancing without ever dominating. Sounds effects in the show I saw were few but effective: a key turning in a creaky lock, the rumble of a bus starting up. Effects applied to Gilligan’s voice were especially eerie and memorable (over-the-top, but perfectly so), transforming him into an otherworldly grandmother, speaking from the depths from which we all rose once upon a time. And there are some fun visual trimmings, including wafts of foggy smoke that occasionally turn bright pink in the lights. Fog and lights both, the latter of which sometimes flicker from face to face, are a nice way to change things up without becoming a distraction.

But for my part, I’d love to see a RadioTheatre production that I can’t see at all, just voices in the dark. Zilinyi recently told the New York Observer that he knows the show is working when the audience is watching with their eyes closed (which – not having read the Observer piece – both my friend and I did several times). What if we didn’t have to voluntarily shut off our sense of sight? For 90 minutes or so, we might enjoy being forced on a voyage into darkness.

Olivia Jane Smith is a longtime friend of Unwinnable (and we here at Team Unwinnable are a bunch of Lovecraft nuts!). Many thanks to Olivia and her editor at the New York Theatre Review, Jody Christopherson, for allowing us to run this review for your enjoyment.