Hollywood needs to take a good, long look at 2009’s GOEMON, with its ninjas framed by moonlight while leaping high into the air, landing in a flash and running along rooftops as arrows and throwing knives whiz by. You might assume this kind of movie is based on a manga or anime title, but it’s actually an historical fantasy based around legendary Japanese bandit Ishikawa Goemon.

Goemon was a kind of Robin Hood for 16th century Japan, one who was boiled alive with his son after a failed assassination attempt on daimyo Toyotomi Hideyoshi. His story has inspired 18th century Kabuki plays, Super Nintendo video games and Kazuaki Kiriya’s amazing feature film that contains over 2,500 visual effects.

The actors effortlessly slip into CGI counterparts in a way that still feels clunky in something like Wolverine or Spider-Man. The editing style is very reminiscent of the Wachowski brothers’ Speed Racer and could benefit significantly from current 3D trends.

If you love ninja action, you won’t find any finer.

The film traces the period of unification in Japan, when peace was shakily being enforced by legions of armies. The great and noble Lord Nobunaga is slain and his general assumes control of the nation. While this is going on, we meet master thief Goemon as he robs a warlord and tosses out gold to the people. It seems, however, that he also steals a box—a Pandora’s Box—and that kicks off two bloody, sword-slinging hours of super-ninja action!

GOEMON falls in the category of Sky Captain, 300, Hero and other movies that are so beautifully shot and composed that they are arthouse even in just a technical manner. But GOEMON also has all the

action that you would hope to get in a summer popcorn flick. The fight scenes are massive in scale and atmosphere, and I guarantee that you will see many things that you wish were in Hollywood movies. 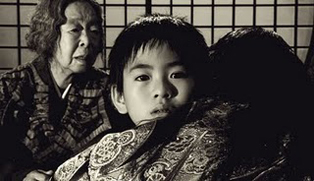 This movie reminds me of what would be a trilogy nowadays—nine acts condensed into three over the film’s 127 minutes. We follow the characters through their lifetimes, from children to soldiers to badass, rogue super-ninjas. If you like Zorro, Iron Monkey, Robin Hood or anything in the realm of the deposed prince who becomes a folklore hero only to one day return and reclaim his kingdom, you should watch this. If you love ninja action, you won’t find any finer. If you want to see what can be done with visual effects and editing, what kind of larger-than-life adventure can be made with modern technology, watch this movie.

It’s currently streaming on Netflix. The film is dubbed, unfortunately, but that means you can keep your eyes on the action. Believe me, you won’t be able to look away.

Kurt Christenson might be watching a foreign action movie, reading comic books, or covering live music. Find out at @KurtChristenson